A print is a piece of paper upon which an image was been imprinted from a matrix (such as a wood block, metal plate, or lithographic stone). For antique prints, the part of the printmaking process which needed the most skill, took the most time, and was the most expensive, was the creation of the matrix. Carving a wood block, etching a copper plate, engraving a steel plate, or drawing on a lithographic stone took a skilled artist/craftsman considerable time and effort, and the cost of materials and the draftsman was substantial, usually as much as, if not more than, the cost of the paper, ink and press time.

As discussed in earlier blogs, most antique prints were made for commercial, not artistic reasons, so it was always appealing to a printmaker if there was a way to save time and money in the production of a print. One of the best ways of doing this was to reuse an already existing matrix and so it is not surprising that there are many examples of what I call “recycled prints,” that is, a print made from a previously used matrix. 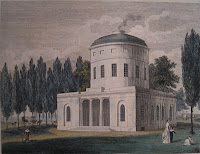 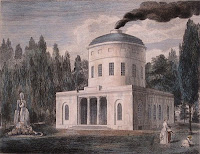 Sometimes these prints would simply be a second edition with little change made to the matrix. An area of the image might be reworked a bit because of wear, the publisher or date might be changed, a new border added, or the title might be redone. Other times, more significant changes were made to the image, with whole areas reworked. This was sometimes done because the image needed to be corrected, for instance in the prints above where the William Rush water fountain which had been placed in front of the Philadelphia Centre Square Waterworks was added to a later edition of this Birch Print. Sometimes the modification was more extensive, done so that a whole “new” image could be produced for quite a different purpose than that of the original print.

For a wood block, it was not easy to modify the matrix, as the material could not easily be “corrected.” If a wood block needed to be modified, the printmaker would usually carve out a section of the printing surface and drop in a new carved image. This was rather awkward and less than totally satisfactory, so few examples of recycled woodcuts or wood engravings exist.

A metal plate was far easier to modify. The part of the matrix surface to be corrected could be hammered and buffered smooth and then a new image engraved in its place. For copper, as a soft metal, this was fairly easy to do, but even steel plates were reworked in this manner. This plate modification would sometimes leave some evidence of the reworking, with faint, ghost images from the original design evident on the print or a smudged “halo” around the edge of the reworked area.

One of the great advantages of lithography was that it was the easiest method to rework. As lithography is primarily a chemical, rather than physical, manipulation of the matrix, it could be modified quite easily. Sections of an old image could be wiped clear and a new image put in its place, often so cleanly that evidence of the modification was impossible to see.

The study of recycled prints is fascinating. It can be fun to find that the image of a particular print started out its life quite differently. The reasons for the modifications can lend insight into the history of society, of print making, or of politics and other aspects of our past. One of interesting stories of recycled prints is that one can sometimes find anachronistic remainders from the original image which do not make sense unless one understands the history of the recycling.

A variation on recycled prints might be called “recycled images,” which differ from the former in that though the image is taken from an earlier print, it was produced from a completely different matrix. An example of a recycled image was discussed in my earlier blog on allegories of Washington and Lincoln. In this example, in order to create a memorial print in response to Lincoln’s assassination, print publisher William Smith hired D.T. Weist to copy and modify an earlier print by John James Barralet showing the apotheosis of George Washington. The Smith print was a lithograph copy of the earlier Barralet engraving. It is from a different matrix, but it is a directly recycled image.

This print is a nice example of the anachronistic remainders I mention above, puzzling aspects of prints that often make no sense unless one realizes that the images are recycled from earlier prints. For instance, why is there an American Indian weeping at the death of Lincoln, and why are there too few stars on the American shield, and why is there a medal of the Society of Cincinnatus on the tomb? All these things make sense in a print about George Washington, but appear in Smith's print about Lincoln only as anachronistic left-overs from the print's source.

I have always enjoyed discovering and analyzing recycled prints and images and so will make this a regular subject for this blog. Interestingly, Lincoln features prominently in a number of examples of recycled prints. Next week I'll discuss an example where the plate was recycled not just once, but twice!
Posted by Chris Lane at 8:00 AM