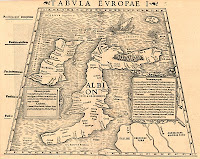 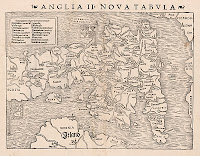 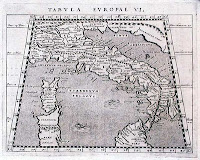 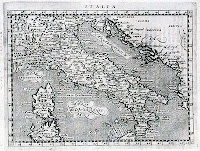 It amused us that here were two maps published in the same atlas that had radically different depictions of essentially the same region taken from sources fourteen centuries apart! This pairing of “ancient” and “modern” depictions of the same place was not limited in Munster just to the British Isles, nor were similar pairings limited to just Munster’s atlas. For about 100 years beginning in 1482, many such pairs of maps, of the entire world and of its parts, were issued in a series of atlases, all published without comment, the old and new maps both presented with equal prominence. What is the story here? Why would mapmakers produce maps that were so clearly out-of-date while they had more current maps in the same atlas?

To understand this, we need to look at the way that knowledge of the world was viewed during the early Renaissance. The Renaissance was partly spawned by the rediscovery in Europe of Greek and Roman literature and scientific works, particularly through the diaspora of Greek scholars from Byzantium in 1453. The appearance of these ancient works was an mind-blowing event for thinkers of the time, for here was a body of lost knowledge seemingly handed down as from Heaven. The authors of these works, such as Plato, Aristotle, and Ptolemy, were seen as figures who had access to Truth and Knowledge and they took on an aura of omniscience.

At the same time, Europe was politically and religiously in a period when individuals and institutions were consolidating their authority, with lords, kings and the Church broadening and strengthening their positions of power. Society developed strict rules for each person’s “place,” setting down a structure in which each person had a clear position in the hierarchy. Those who had a stake in this social organization (i.e. those with power and privilege) were very strict in their protection of the structure, fiercely trying to maintain the status quo and ruthlessly putting down any perceived threat to the established rules and roles.

As part of this overarching protection of the status quo within society, the ancient authorities and their works were afforded great respect and those in power usually reacted to any questioning of their “truths” with suppression. Some understanding of the thinking of the time can be found in Iain Pears’ An Instance of the Fingerpost, a book I recently read and enjoyed. In that novel, an Italian who believed in experimental knowledge (as opposed to accepted knowledge), had a discussion with some classical scholars at an Oxford college in 1663. (The Italian’s words are in italics): 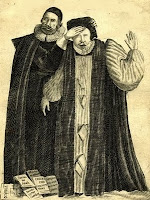 "It is true, though, that you seek to cast off the knowledge of the ancients, and replace it with your own?"
I said I respected all opinions of worth.
"Aristotle?" he said in a challenging way. "Hippocrates? Galen?"
I said that these were all great men, but could be proven to be wrong in many particulars. He snorted at my reply.
"What advances? All that you novelists have done is to find out new reasons for ancient practice, and show how a few trifles work in ways other than was supposed."
"Not so, sir. Not so," I said, "Think of the barometer, the telescope."
"He waved his hand in scorn. "And the people who use them all come to entirely different conclusions. What discoveries has the telescope made? Such toys will never be a substitute for reason, the play of the mind upon imponderables."
"But the advances of philosophy, I am convinced, will achieve wonders."
"I have yet to see a sign of it."
"You will," I replied warmly.
...."You are wrong, sir....All knowledge is to be found in ancient texts, if you know how to read them aright..."
...."Did not Aristotle himself say that our ideas must conform to our experience of things as they are?"....
"And after you have put Aristotle to your proof? And, no doubt, found him wanting. Then what? Will you submit the monarchy to your investigations? The church, perhaps? Will you presume to put Our Savior Himself to your proofs? There lies the danger, sir. Your quest leads to atheism, as it must unless science is held firmly in the hands of those who wish to strengthen the word of God, rather than challenge it."

As you can see from this section, the questioning of classical works was seen as the thin end of the wedge that could lead to questioning political authority or even the church. This to a great extent explains why the Catholic Church was so fierce in its attempts to suppress anyone who questioned even ancient scientific “truths.” The classic example of this, of course, was the suppression of Copernicus’s theory that the sun, and not the earth, was the center of the universe (espoused in his De Revolutionibus of 1543), a suppression that was continued even into the next century with the arrest of Galileo for his support of the Copernican theory. While the Church argued that Copernicus’ theory went against the ‘word of God’ (using various quotes from the Bible), their strong reaction really was an attempt to dampen any thought of questioning any established authority.

The appearance of two maps, one ancient and one modern, in atlases of the late fifteenth through the second half of the sixteenth century must be seen in light of this social reality. Ptolemy was considered as “The Geographer”, the ultimate authority on the subject and so his maps, even when known to be wrong, could not easily be discarded. 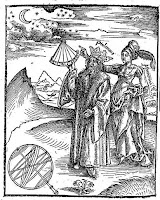 Claudius Ptolemy was the librarian at Alexandria in the second century A.D Alexandria was the greatest center of learning in the ancient world and the library there was the greatest repository of ancient knowledge. Ptolemy wrote two great works, one of which was the Almagest, an astronomical treatise. Indeed it was the Ptolemaic celestial theory which Copernicus questioned, and it was in part the protection of Ptolemy’s authority (as “The Astronomer”) that led to the Church’s reaction against Copernicus. 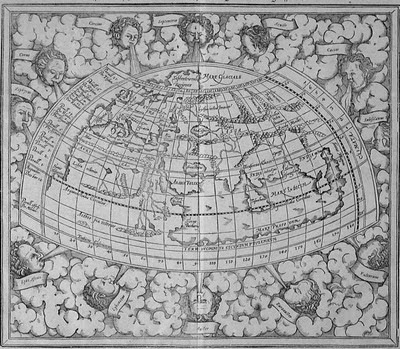 The other great Ptolemaic work as the Geographia, his compilation of all known geographic information, including instructions for how to make maps of all parts of the world. When rediscovered, this work had a huge impact on Europeans’ understanding of the world. A large number of editions of Ptolemy’s Geographia were published beginning in 1475, with the 1477 Bologna edition being the first to include maps. It is not known if the maps which appeared in these editions of Ptolemy’s Geographis were originally drawn by Ptolemy, or just constructed from his directions, but by the end of the century the Ptolemaic maps of the known world, the oikoumene, became a standard part of classical learning. 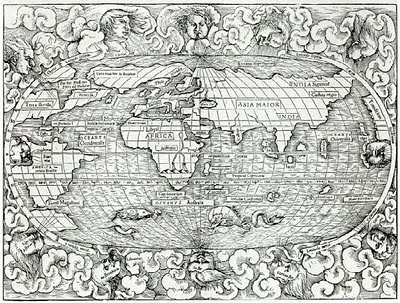 Of course, Ptolemy’s oikoumene was soon found to be in error, demonstrated by Portuguese discoveries along the coast of Africa, the discovery of an entire New World, and much other new geographic information, such as the fact that the Indian Ocean was not land-locked. How did mapmakers respond to this? They didn’t want to simply discard Ptolemy’s maps (for this would be to challenge the established order), so initially they started modifying his map by correcting the obvious errors and trying to fit the new knowledge into the twelve hundred year old conception. As geographic knowledge of the world grew, mapmakers soon felt they had to make completely new maps, but rather than simply discarding the old maps, they decided to include both the old and the new mappings in their atlases. Everyone who cared about geographic accuracy knew the new maps were far superior, but the inclusion of the old maps still paid lip service to the established classical order. Such “double speak” is not uncommon in history and in this case it provides us with a fascinating and enlightening peek back into the minds of our European ancestors.
Posted by Chris Lane at 8:00 AM