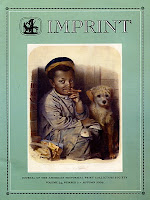 The latest issue of Imprint came out recently and among its excellent articles is one entitled "What Currier & Ives Prints Were Most Popular in the Nineteenth Century?" Written by my friends John Zak and James Brust, this article and related topics are the subject of today's blog. Before I get to that, however, I will use the publication of this article as an excuse to again put in a pitch for the American Historical Print Collectors Society, which is the publisher of Imprint.

One of my first blogs was about the AHPCS. I mentioned Imprint but didn't really emphasize what a great publication this is. It is the only journal specifically focused on American historical prints and the last issue completed its 34th year of publication! While there are many reasons to join the AHPCS, the subscription to this biannual journal is by itself well worth the $50 membership fee.

As it happens, however, this year the AHPCS is making a special offer of a reduced membership for new members for only $25. If you are at all interested in American prints, don't miss the opportunity to join at this low price and see what a great journal Imprint is. Just visit the AHPCS web site for more information. You can mention you read about this reduced membership on the Antique Prints Blog. As a further incentive (note I get nothing from promoting the AHPCS other than to support an organization I think is great), I will guarantee your satisfaction. If you join and receive your first issue of Imprint and do not think your membership was worth the $25, you can cancel your membership and send me the issue of Imprint you received, and I will personally reimburse your $25 plus the cost of mailing the journal to me. I don't think anyone will take me up on this, but I don't want any reader to hesitate if they are at all tempted to join... 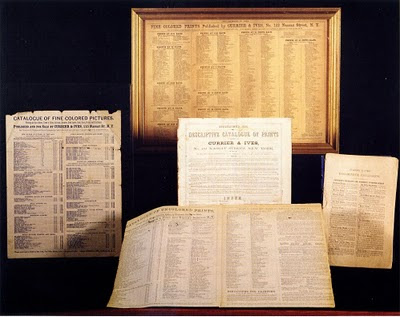 So, now back to the article in question, Zak and Brust's article on what Currier & Ives prints were the most popular in the nineteenth century. What the authors do is use primary documentary evidence to try to analyze the market for Currier & Ives prints at the time they were issued. They used a series of original Currier & Ives sales lists and catalogues to see which types of prints were most often issued by the firm. The argument is that Currier & Ives (always the smart businessmen) would have issued more prints of the types which sold the best than of those which were less popular, a reasonable assumption. There are no sales records for the firm we can study, so we cannot determine how many examples of each print sold, but if a type of print was selling well, the firm would naturally issue more of that type than they issued of prints with a more limited appeal.

I will consider only the author's conclusions for small folio prints (there are some interesting differences for these results compared to those for medium and large folio prints) for these are particularly interesting. Their analysis shows that it was primarily juvenile, "beautiful girls," religious, sentimental, animal and domestic scenes which were the most popular. What is surprising about this is that these are among the least popular subjects today. The prints that are most popular (and thus generally most expensive) today are railroad, yachting, historical, hunting and landscapes. Those subjects, according to Zak & Brust's article, were considerably less popular than the other subjects in the nineteenth century. As they say, “It may be a surprise to the twenty-first-century collector, living in an era when Currier & Ives catholic subjects go begging in the marketplace while small folio railroad scenes sell for thousands, that in the heyday of the C&I firm, the former may have outsold the latter twenty to one.” 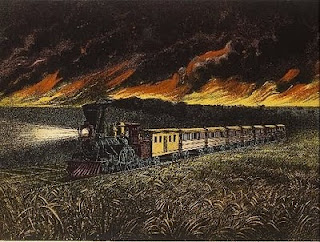 I found this article quite exciting to read and ponder. It is a terrific example of using prints and related documents as primary resources in order to try to understand our past. Today we look at Currier & Ives prints in light of our own world-view and obviously those purchasing prints in the nineteenth century saw them in a different light. The work that Zak & Brust have done can help us to look (at least to some extent) through the eyes of our ancestors. Zak & Brust conclude their article with these interesting thoughts: 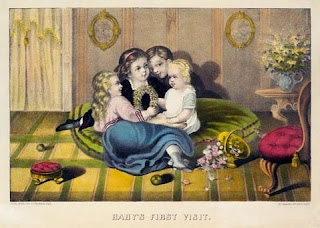 For the modern collector, Currier & Ives evoke romanticized images of American life in the nineteenth centry. But those who bought C&I prints at the time they were issued were living in that era, not looking back at it, and its realities were often very unromantic. Many were immigrants. Their lives included religion, family, and perhaps nostalgia for the places they had come from. These small folio buyers could have chosen the fancier or more romantic topics in that size for the same price as the religious or sentimental, but seem much less likely to have done so. Instead, they appear to have purchased the topics they were familiar with, and perhaps those that would help them feel better; the cute children, pretty women, and devotional images might well have gratified them emotionally and spiritually.

Back in 1991, I did some similar analysis on the popularity of Currier & Ives prints. Beginning in 1988, the AHPCS decided to "redo" the Best 50 Currier & Ives prints lists which had originally been compiled in 1932-33 (the first year, the best large folio prints were selected, followed the next year by the best small folio prints). The original lists were selected by a small group of dealers and collectors and the new lists were voted on by the entire AHPCS membership. A book, Currier & Ives. The New Best 50

was published, for which I wrote an article "A Comparison of the Original and New Best 50 Currier & Ives. Some statistics and thoughts."

Most of my analysis was focused on the differences in the tastes of collectors in the early twentieth century compared to those of collectors later in the century, but I came to similar conclusions about the reason for the popularity of certain prints today:

Perhaps in a world that is frantically paced, with news of worrying events constantly bombarding us from all sides, we look to Currier & Ives prints to transport us back to an earlier time of simple values. As much as any, Currier & Ives prints graphically embody this image of our past, and this indeed may be the core of their continued popularity.

Zak and Brust use different methodology and it is thought provoking to see them expand on these ideas and bring up new ways of understanding Currier & Ives prints, especially in the context of the period when they were issued. To some extent we are at the beginning of the serious study of "popular" prints of the nineteenth century and it is quite exciting to read articles like this and to think about all the further research that can and will be done by scholars like Zak and Brust (and much of which will appear in future issues of Imprint).
Posted by Chris Lane at 8:00 AM