I am in baseball heaven! I have been a Yankee fan since I was six years old and a Phillies fan ever since I moved to the City of Brotherly Love in 1978 and now my two favorite teams are meeting in the World Series. I believe it will be a great series between terrific teams and I will be happy whichever team wins!

So this is a great excuse to talk a bit about prints of baseball. The first recorded, organized baseball contest took place in 1846, and in the following decade and a half, baseball began its life as an organized sport with formal rules, a league and a number of professional teams. With the turmoil of the Civil War, participation in organized baseball fell off, but interest in the sport was carried by Union soldiers throughout the country, even being played by Union prisoners in Confederate camps, playing amongst themselves or against their guards. At the end of the war baseball was played by more people than ever, and Charles A. Peverelly was able to write. “The game of Base Ball has now become beyond question the leading feature of the out-door sports of the United States.” (Book of American Pastimes, 1866). 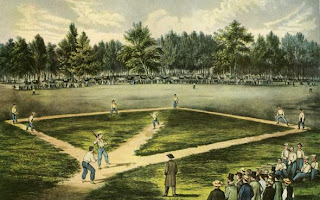 Though a popular sport for many Americans, baseball was not an activity of the elite and so not many separately issued prints were made showing the sport. The most famous, and the most sought-after baseball print, is the Currier & Ives print "The American National Game of Baseball. The Grand Match for the Championship at the Elysian Fields, Hoboken, N.J." Issued in 1866 shortly after the Civil War, this is a terrific, large folio print showing a championship game in 1865, between the Mutual Club of Manhattan and the Atlantic Club of Brooklyn. This game was played at the Elysian Fields in Hoboken, N.J., the site of the first recorded, organized baseball game on June 19th, 1846, between the New York Knickerbockers and the New York Nine. Note that the print shows a very early form of baseball, with none of the players having gloves, the catcher without mask, and the pitcher throwing underhanded.

Originals of this print are very rare, but there have been a number of reproductions, including one by Andres Inc. in 1942 that is the about the same size as the original and hand colored. We get at least one query every other month about this print and so far, every one we have been contacted about has been a reproduction. We have never handled the original, but maybe one day... 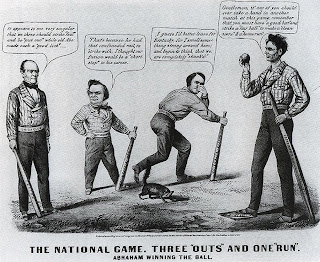 Currier & Ives did a few other, smaller baseball prints. Their first, and one of the first to identify baseball as a "national" game, was their political cartoon "The National Game. Three 'outs' and one 'run'" This print, issued in 1860, shows Lincoln after winning the Presidential election. Lincoln, stands on "Home Base," holding a ball and railroad tie as a bat, having beaten his three opponents--John Bell, Stephen A. Douglas, and John C. Breckinridge--each also holding a bat. 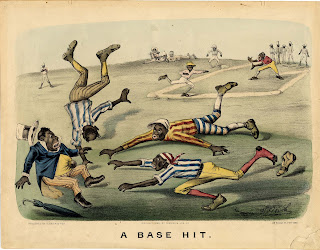 The firm also did a number of baseball prints in their "Darktown" series. These caricatures (the subject of a future blog), many drawn by Thomas Worth, present blacks as inept actors in the various activities, including sports. The Darktown prints showcased a full array of negative stereotypes, African Americans portrayed as comical figures to the primarily white consumers of Currier and Ives prints. The prints are a vivid testament to the racial attitudes of white, middle-class Americans of the late nineteenth century. Currier & Ives issued a number of these prints with a baseball theme, demonstrating that the sport was becoming a well recognized sport by the 1880s. 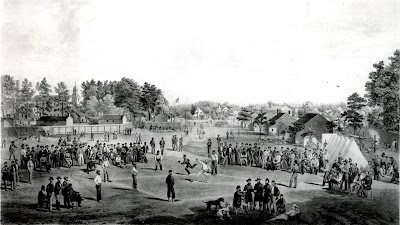 The only other "frameable," separately-issued print of baseball from the nineteenth century that I know of is Otto Boetticher's “Union Prisoners at Salisbury, North Carolina, Playing Baseball," from 1863. The print shows the Confederate prison camp in Salisbury, with an accurate and quite detailed image of the town in the background. The camp is shown as clean and spacious and the prisoners look relaxed and well fed. A large group of spectators surrounds the field, many standing and sitting in the short outfield. The print was based on a drawing by Act. Major Otto Boetticher “from nature,” indicating that he was a prisoner or at least visitor to the camp. The equipment and outfits of the period is well shown and interesting one of the teams has what appears to be a uniform consisting of long-sleeved white shirts with a red ribbon pinned on the breast. 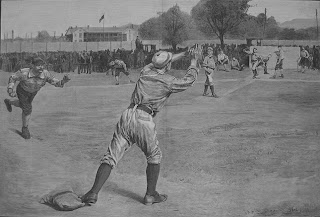 These are all interesting, and quite rare prints. The most common, and affordable, early prints of baseball are the ones published in the illustrated newspapers of the day. The first such print I have come across is the bottom half of a double-page spread from Harper's Weekly on October 15, 1859, showing “A Base-ball Match At The Elysian Fields, Hoboken.” (Top image above) In the following decades, as baseball became more and more popular, numerous images appeared, including portraits of famous teams and players and "action" scenes. These are wonderful examples of how the illustrated newspaper can give us first-hand pictures of aspects of our past for which we have almost no other visual images.

One final group of nineteenth century baseball print are the pictures which appear on the covers of illustrated music sheets (example above at left). These, along with the illustrated newspaper engravings, provide plenty of affordable prints for anyone interested in this history of our national pastime. They wonderfully show us the beginnings of the sport which this week will provide us with another grand spectacle! Go Phillies! Go Yankess!
Posted by Chris Lane at 8:00 AM