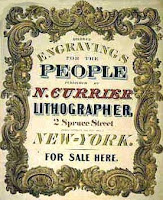 As time goes on, I plan to feature different American printmakers in this blog and the most famous and successful of them all is the subject of today's post. Everyone has heard of "Currier & Ives," but there is some confusion about what this refers to. "Currier & Ives" was the name used by a New York printmaking firm from 1857 until 1907. This business had been in operation since 1834, first as Stodart & Currier (1834) and then as N. Currier (1835 to 1856). Though the name changed, all the prints produced by this firm are usually referred to as "Currier & Ives prints."

Nathaniel Currier (pictured on right) was a printmaker and businessman; James Ives (pictured on left) started as the firm's bookkeeper in 1852 and five years later became Currier's partner. Neither was an artist, so though all Currier & Ives prints were published by the partners, they were drawn and lithographed by other persons. Nathaniel Currier retired in 1880 and died in 1888 and James Ives died in 1895. The firm, under the direction of their sons, Edward West Currier and Chauncey Ives, carried on until 1907. 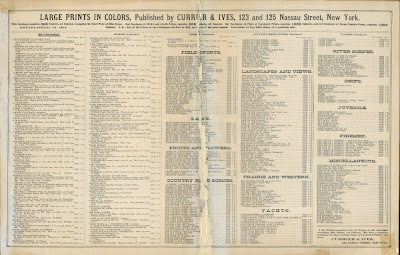 The Currier & Ives firm was in the business of producing lithographed prints intended to be sold to the general public for framing and display in the home or at work. Calling themselves "Printmakers to the People," they provided for the American public a pictorial history of their country's growth from an agricultural society to an industrialized one. For nearly three quarters of a century the firm provided "Colored Engravings for the People" and in the process became the visual raconteurs of nineteenth-century America. 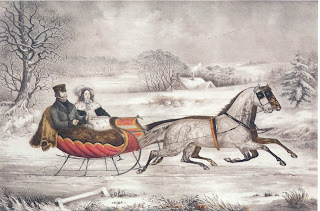 The firm produced a variety of images, including pictures of newsworthy events and prints depicting every subject relating to American life: sports, games, home life, religion, children, hunting, fishing, entertainment, trains, ships, views of cities, and so forth. Currier & Ives used all sorts of sources for their prints, including staff artists who are unknown today, as well as a group of more famous artists such as Louis Maurer, Thomas Worth, Arthur Fitzwilliam Tait, Frances ('Fanny') Flora Bond Palmer, George H. Durrie, Napoleon Sarony, Charles Parsons, and J. E. Butterworth. Currier & Ives were also not above borrowing images from other print publishers, both American and European. In all, it is likely Currier & Ives published more than 8,000 prints total! 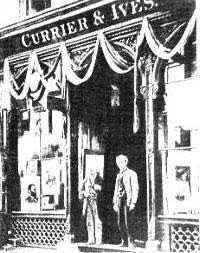 Currier & Ives' prints were sold either directly from Currier & Ives' shop or through other printsellers. The firm's shop in New York was a popular place to browse through their ever changing inventory. Images of current events and personages were always shown in their window for passers by. Currier & Ives also used others to market their prints, maintaining a brisk wholesale business. Their prints were sold by itinerant sellers who would push carts filled with prints through the streets of New York and other cities, as well as from more established print shops around the United States and even overseas. The quality and variety of Currier & Ives's prints meant that other printsellers were always eager to carry the latest images, thus insuring a wide distribution. The prints by the firm are famous for three main reasons. First, they had a tremendous ability to produce images that appealed to a wide segment of the general public in the nineteenth century (and continue to do so today!). Secondly, the quality of their prints was very high while their prices were low. Thirdly, because of their financial success (the result of the first two factors), they issued more different prints in more copies than any other publisher. It is interesting that here is a case where the more common prints (Currier & Ives) tend to sell for higher prices than those that are more scarce (those by other American popular print publishers). 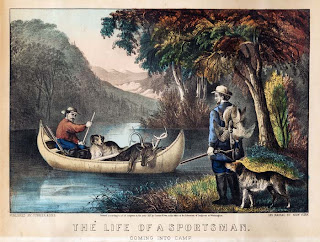