Last weekend I had the great pleasure of visiting Monticello again. Charlottesville was lovely with fall foliage and Thomas Jefferson's house is a wonderful building, with many facets of interest and beautiful grounds. Not surprisingly, of course, I was particularly interested in the many prints and maps that hang in Monticello and which can be seen on the tour.

Before I get into my thoughts about items I saw last weekend, I want to talk a bit about the curitorial collection at Monticello, curated by Susan R. Stein. Susan has been Monticello's curator since 1986, and in 2005 was named Gilder Curator and the Thomas Jefferson Foundation’s vice president for museum programs. Susan is well known for the excellent "Worlds of Thomas Jefferson at Monticello" exhibition and book from 1993 and she has been very active in building the collections of Jefferson material, developing museum programs, and placing items from the collection in Monticello so that Jefferson's home is as close to how it was when he lived there. Susan is also a print enthusiast and scholar and a wonderful asset to Monticello and the print world.

There are many drawings, silhouettes, and paintings hanging on the walls, but I was struck with how many prints and maps are on display in Monticello. To me this reflects something about the character of Thomas Jefferson. Jefferson was a man who appreciated art, but my feeling is that he never looked at art simply for its aesthetics, but rather always looked for "content" or "meaning." While many paintings and drawings have meaning beyond their aesthetics, it is specifically the content or meaning of most prints which is their raison d'etre. Prints and maps, especially during Jefferson's life-time, were created specifically to depict the physical appearance of a place or person of interest, to tell a story, make a point, educate the viewer, or provide other useful information. These are things that would appeal to Jefferson's inquiring mind and so it is of no surprise to me that Jefferson had so many maps and prints hanging in Monticello.

The tour of Monticello begins in the Entrance Hall, which is where visitors would wait before being greeted there by Jefferson. To help them pass the time, educate them, and provide topics for conversation, Jefferson hung many natural history and cultural artifacts there, as well historical prints and a number of wall maps. Over the fireplace is a nice example of Asher B. Durand's engraving of John Trumbull's "Declaration of Independence." (The other two famous prints after Trumbuill's paintings, of the Death of Montgomery and the Battle of Bunker's Hill, are hanging in the library). Jefferson was, naturally, proud of his seminal role in the event depicted, so this was a perfect print to have on display when visitors entered him home. 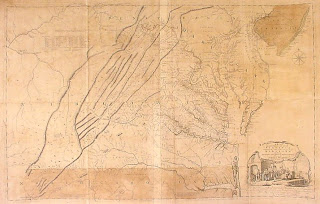 For safety, the maps in the entrance hall are facsimiles, not originals (all the prints on display are originals), because as wall maps they are attached to wooden rollers and hanging on the wall without any sort of protection from a frame and glazing. The maps shown are mostly eighteenth century maps of the different continents, but there are also two important American maps. One is the Aaron Arrowsmith "“A Map of the United States of North America" from 1802. This is an interesting map in that is shows the country the year before Jefferson added the huge western territories through the Louisiana Purchase. The other map is the famous “A Map of the most Inhabited Part of Virginia" by Joshua Fry and Thomas' father, Peter Jefferson.

In the South Square room are hanging two prints from the Boydell Shakespeare portfolio. These are the actual prints that were owned by Thomas Jefferson, but which had been sold in the 1827 sale of Jefferson's estate. Two nicely engraved portraits are also hanging here, one of Lafayette and the other a colored aquatint of Jefferson. That portrait (image near top of this blog) was engraved by Michel Sokolnicki after Thaddeus Kosciuszko, a hero of the Revolution who later in life became one of Jefferson's friends. The tour guide told us that this print is referred around Monticello as the "Bob Hope" portrait of Jefferson, for obvious reasons! A note from Jefferson's grand-son indicated that this print hung in this room. Also in this room is a lovely example of John Binn's 1819 engraving of the text of the Declaration of Independence (this print usually hangs in the entrance hall, which is where Jefferson hung it). The text of the Declaration is surrounded by portraits of John Hancock, George Washington, and Jefferson, as well as the seals of the thirteen colonies. One of the interesting things in this room is the manner in which a series of small silhouettes and engravings are hung, one above the other, with ribbons. This was a popular way of displaying small frames in the eighteenth and early nineteenth century and it is nice to see this 'in the flesh.'

The next rooms (the library, study and bedchamber) show a number of engravings on the walls, but it is floor to ceiling paintings and prints once one walks into the parlor. This art is hung, one above the other, from wires attached to the top moulding or brass rods. This was one not-uncommon way of displaying art in a gallery at the time, which allowed for hanging lots of frames without having to hammer nails all over the walls. Jefferson's inventory of Monticello lists 24 portraits and 17 paintings in the parlor and it makes an impressive display. Included are a number of engraved portraits, including those of David Rittenhouse, Thaddeus Kosciuzsko, and Louis XVI. 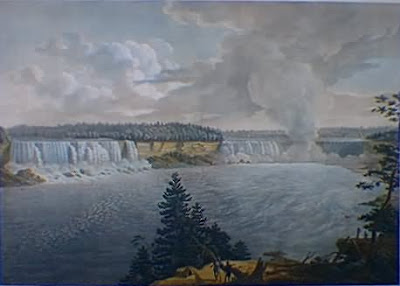 I am not going to remark on every print nor every room at Monticello, but I will finish with the dining room, as it is graced by two of my favorite prints, the pair of 1804 aquatints of Niagara Falls by John Vanderlyn. Jefferson was interested in the natural beauty of America and so it was natural to include prints of this great natural wonder. Also shown in this room is another fine view, this an 1808 aquatint by J.C. Stadler after William Roberts showing Natural Bridge in Virginia. Jefferson thought Natural Bridge was a natural wonder to rival Niagara and indeed he owned the site from 1774 until his death. William Roberts, the artist, had given Jefferson original paintings of Natural Bridge and Harper's Ferry, which hung in the dining room, but these have since been lost. Jefferson also owned an aquatint after Roberts, an example of which currently graces this room.

There are more prints that can be seen at Monticello than I've mentioned, and even more in the curitorial collections. One can get more information on the prints by visiting the Monticello web site. Not only do they have descriptions of a number of the engravings in the Th: Jefferson Encyclopedia, but one can also get a virtual tour of the house. Still, the best way to see these prints and maps is by visiting in person, a trip well worth making.
Posted by Chris Lane at 8:00 AM