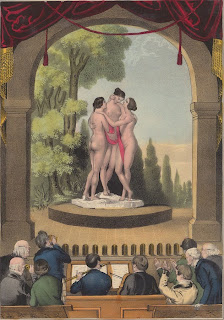 I just returned from a terrific conference put on by the Center for Historic American Visual Culture at the American Antiquarian Society. As I mentioned in an earlier blog, it was titled "Destined for Men" and focused on "Visual Materials for Male Audiesnces." There were 18 excellent presentations on a variety of topics, ranging from considerations of the male body, male spaces, sporting images, and prints "for men's eyes." All the talks were well presented and I learned new things from each, broadening my understanding of and enjoyment of prints. A conference like this makes one realize the richness of insights into our past that prints can provide and certainly has stimulated me to pursue a number of topics in the future. 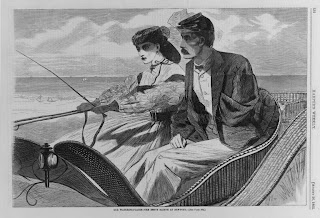 There were too many talks for me to discuss them all, but I will mention a few things that particularly struck me. Megan Kate Nelson's talk "Returning to My Family Complete" considered how prints treated the very large number of amputees in the Civil War (about 60,000!). As a printseller, I can tell you that these sad prints do not sell well (even one by Winslow Homer illustrated above), but they can tell us a lot about how the public at the time saw these casualties. The prints express many different attitudes, from praise for the amputee's bravery to a concern for society's responsibility to expressions of the sad emasculation of these soldiers. A wonderful example of how an examination of historic prints can help us see the past through the eyes of those who lived it. 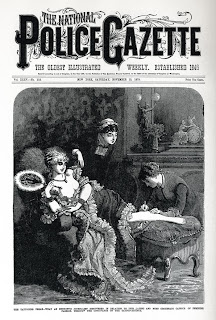 In a previous blog, I have talked about how important I think the images from the nineteenth century illustrated papers are and there a couple of presentations about these prints. Julie Vogt talked about how the National Police Gazette treated boxing differently than theatrical "beauties," the latter images clearly used by the paper to attract readers all the while they condemned the subjects. The James Russell Wiggins Lecture was given by Joshua Brown, who looked at the "sporting press", a whole series of papers such as the Police Gazette, Sporting Times, New York Clipper, and Day's Doing, which covered the less proper subjects of sports, theater, gambling, crime and sex scandals. This was particularly interesting to me, for I have long been a student of the main stream papers, such as Harper's and Leslie's. but was not so familiar with these other papers, despite the fact that there were a good number of them with large circulations. Prints from the main stream newspapers come on the market all the time, but the sporting press issues hardly appear at all. This seems to be a result of a number of factors, including the fact that the sporting press papers probably were not considered to be worth saving and that they were mostly marketed not to private subscribers, but to clubs, taverns or other public institutions, where their survival was less likely than in the private home. 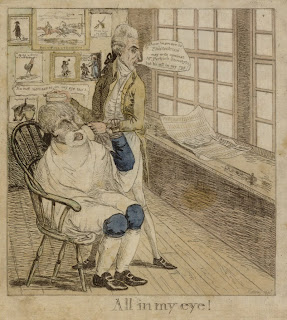 One of the subjects that I am very interested in is how prints were sold and used. A number of talks touched on this issue, including Ellery Foutch's presentation on how Eugen Sandow used images of his rather impressive physique to sell himself and his products and Kevin Muller's illustrated examples of a number of fascinating optical toys created from prints. Of particular interest was Allison Stagg's talk on caricatures in New York in the first decade of the nineteenth century, which described how these caricatures were sold and passed around in various places, including barber shops. There is even a print which shows a barber shop from the period with some of these prints tacked on the wall for viewing and possible purchase. Cool stuff! 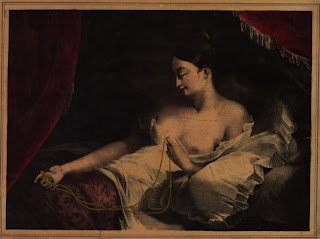 With the focus on prints aimed at a male audience, it is not surprising that there were a number of presentations which had a slightly (or more than slightly) ribald theme. Nancy Siegel illustrated the regular use of the chamber pot in eighteenth-century prints, where it was used in a number of interesting symbolic ways. Katherien Hijar, in her study of some paintings by Henry Bebie, showed how apparently innocent images can in fact have a deeper meaning, for these paintings which look like simple groupings of attractive young ladies turn out to be images of the interiors of bordellos. Finally, Thomas Bruhn gave a talk on the subject that is of great interest to me, viz. "erotic" prints issued by mainstream nineteenth-century publishers. These prints for the most part are such that they appear fairly tame today, but if one thinks of the general social mores of polite Victorian society, it is pretty surprising that firms such as Currier & Ives, Pendleton, and James Baillie would issue these prints that somewhat 'bare it all.' This is a topic I plan to pursue in more depth in the future, and Tom's excellent presentation gave me lots to think about. 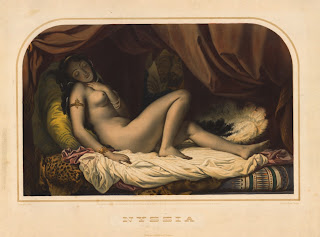 As I think you can tell, I really enjoyed the conference. My take-away from it is i) the AAS is a great institution to put on such a conference and has great inventory (both things I already knew--note that all but the 2nd & 3rd images here are from their collections), ii) there are a lot of terrific scholars looking into antique prints and their role in and reflection on our history, and iii) I have lots of fodder for future study and blogs. Stay tuned...
Posted by Chris Lane at 8:00 AM