Time for another exploration of a cartographic myth, in this case one that appears on maps of Africa in the sixteenth century, the myth of the Kingdom of Prester John. 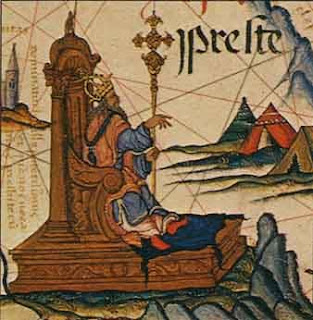 The beginning of the legend

In the 1130s, under the leadership of Imad ad-din Zengi, Turkish power became a serious threat to the Crusader kingdoms in the Holy Land. This caused these kingdoms to seek aid from Western Europe, and around 1145, Hugh, Bishop of Jabala, was sent to meet Pope Eugenius to ask for help. Otto von Freisingen, Bishop of Freising, recorded in his Historia de Duabus Civitatibus (1158) that Hugh told the Pope about a certain Prester John, a Christian priest and king whose kingdom was in the extreme Orient, beyond Persia and Armenia. Prester John was supposed to be a descendent of the Magi and a possessor of great wealth. It appears that Hugh talked to the Pope about Prester John because rumors had been circulating in Europe that he was going to come to the rescue of the Crusader kingdoms and Hugh wasn't to emphasize that this would not happen as Prester John was cut off from the Middle East by the Tigris River.

In 1165, a (forged) letter allegedly from Prester John was delivered to Emperor Manuel Comnenus of Byzantium. Manuel forwarded the letter to Emperor Frederic Babarous of the Holy Roman Empire. The forgery was quite clever, for the forger had obviously read Otto von Freisingen's report and he repeated many of the same stores and further played upon the hopes and fears of the Europeans vis-à-vis the infidel Turks. The letter caused a sensation and not only were copies circulated widely, but excepts were even put to song.

"...I, Prester john, who reign supreme, surpass in virtue, riches and power all creatures under heaven. Seventy kings are our tributaries. I am a zealous Christian and universally protect the Christians of our empire, supporting them by our alms. We have determined to visit the sepulchre of our Lord with a very large army, in accordance with the glory of our majesty to humble and chastise the enemies of the cross of Christ and to exalt his blessed name."

"For gold, silver, precious stones, animals of every kind and the number of our people, we believe there is not our equal under heaven."

"If again thou askest how it is that the Creator of all having made us the most superpotential and most glorious over all mortals-does not give us a higher dignity or more excellent name than that of Priest (Prester), let not thy wisdom be surprised on this account, for this is the reason. We have many ecclesiastics in our retinue of more dignified name and office in the Church, and of more considerable standing than ours in the divine service. For our house-steward is a patriarch and king; our cup-bearer is an archbishop and king; our chamberlain is a bishop and king; our archimandrite, that is chief pastor or master of the horse, is a king and abbot. Whereof our highness has not seen it repugnant to call himself by the same name and to distinguish himself by the order of which our court is full. And if we have chosen to be called by a lower name and inferior rank, it springs from humility."

The only official response to the letter was that Pole Alexander III sent out a Papal emissary in 1177 with a letter for Prester John, carried by his physician, Magister Philippos, but nothing was ever heard of what became of him. Years later, in the mid-thirteenth century when Asia was opened again to Europeans by the ascendancy of the Tartars, the great search began to find this Prester John, a search which was very important opening up Asia and re-establishing ties with China. Though he was never found, his legend continued throughout the middle ages, with Kings and Popes sending off letters at different times seeking his help and dreams of his riches filling the heads of many.

Historical basis to the legend

The Khitai were a tribe that had ruled much of China in the late 10th century as the Liao Dynasty. As their dynasty collapsed, in 1124, a body of the imperial family escaped to Central Asia, where they established a new empire over the Turkish tribes, called Kara-Khitai (or "Black Cathay"--Black being a term of honor at the time). In 1141, in their expansion to the west, they met the eastward reaching kingdom of the Seljuk Turks of Persia. In a battle fought Sept. 8-9, 1141, at Qatawan (Katvan), near Samarkand, Yeh-lü Ta-Shih (or Yeliutashi), ruler of the empire of Kara-Khitai, defeated Sultan Sanjar, the Seljuk Turk ruler of Persia.

Reports of this great victory over the Turks reached the Crusader kingdoms soon thereafter and included was the rumor that Yeliutashi was a Christian. This appears to be unlikely, based perhaps on a confusion between the Kara-Khitai and the Keraits, a Christian-Nestorian tribe from central Asia.

By the 14th century, all searches for Prester John and his kingdom in Asia had turned up empty. Rather than give up on this hopeful and glamorous legend, however, Europeans decided that they must have been looking in the wrong region and they turned their eyes on the interior of Africa. This was spurred by the fact that there was an actual Christian kingdom there, the Nestorian kingdom of Abyssinia or Ethiopia. Mysterious Abyssinian pilgrims sometimes visited the Holy Land, though their kingdom was rumored to be bordered by inaccessible mountains. What better place to put the Kingdom of Prester John? Eastern Africa was sometimes conflated in European thinking with the "Indies," and so here must be that great Christian King in the East. The Portuguese sent several expeditions to make contact with this kingdom and the reports which came back further confirmed the belief that finally Prester John had been found. Thus the venerable legend moved to a new continent, and it was in Africa that Prester John's Kingdom was thought to lie when the earliest printed maps made their appearance. The most famous map showing Prester John's kingdom (illustrated above) was a map by Abraham Oretlius first issued in 1573. The legend eventually passed from common belief, but not before leaving a few maps illustrating this wonderful myth.
Posted by Chris Lane at 8:00 AM