There is a lot of confusion over what it means to have a “numbered” print, so I will discuss the issue in today’s blog. What people usually mean when they say that a print is numbered, is that the artist or printer or publisher has indicated that the print in question was the Xth print out of a total of YY made. This is usually indicated with a pencil notation in the margin in the form X/YY. 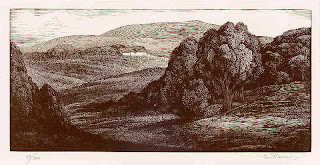 So, for instance, if Thomas Willoughby Nason produced a total of only 200 impressions of his print of “Upland Pastures,” then he would mark the fifth print that he pulled from the woodblock as “5/200” and the eighty-ninth he pulled off the block as “89/200” and so on. This was intended as an indication to a potential buyer that there was only a limited number of these prints made (200) and that this one was one of the official group (number 89).

It is important to realize that this numbering is really only a marketing stratagem, not something that has anything to do with the intrinsic quality or value of the print. Artists numbered prints simply so that buyers would know that the run was limited and that their print was one of the official run. The presence of numbering does not in itself make the print any more or less valuable, it just allows us to have knowledge of a couple of important facts about the print.

It is, however, quite clear that for prints by artists who did number their prints (and there are many who didn’t), it is important to have the number on the print, for that does tell us those important facts. While it is true that if Nason did not number his prints they would still be just as valuable, for those prints he did number, you want to make sure you have an impression with the numbering. Where a particular print was numbered by the artist, any impression without a number is probably one that is a reproduction or a later restrike, not from the original series, and that of course means that impression has considerably less value.

There a number of reasons why prints are not numbered. First off, numbering of a print is a relatively modern notion. It was only in the late nineteenth century, with the etching revival, that prints began to be numbered. Before that time there was no need to number prints---all prints were run off in limited numbers. Printing processes were such that huge runs of prints could not be made and also there wasn’t a large enough market that anyone would run off more than a relatively limited number of impressions. Before the mid-nineteenth century, no one worried about there being a huge number of impressions of any print, so why would anyone bother to number theirs? It is much like how now-a-days television broadcasts from around the world often are noted as being either “Live” or “Recorded earlier.” Fifty years ago, no television broadcast of an event from overseas could be shown live, so no one would have thought to bother to label a broadcast as “Recorded earlier.” Likewise, before the later nineteenth century, no printmakers would have thought of numbering their prints.

A second reason many prints are not numbered is that the numbering of prints is really limited to “fine art” prints that were intended to be marketed to discerning collectors who cared about such things. Most prints, as discussed in an earlier blog, are commercial prints that were not aimed at a collectors market and for those prints there was no reason to bother to number them. Most of these prints were, of course, issued in far greater number than the fine art prints which were numbered, but some of these are very rare today and, as discussed earlier, scarcity is not that important a factor in the value of most of these prints.

Finally, many modern, fine art printmakers just didn’t bother to number their prints. This could be for a number of reasons, such as the possibility they didn’t want to limit how many impressions they could run off, or they didn’t feel that it would help sell their prints, or whatever. Many modern prints are official impressions from a limited series even though they lack numbering. What is important for those who are purchasing modern, fine art prints is that you know whether the series in question was numbered. If you are looking at a print from a series that was never numbered, then the absence of a number means nothing, but if the series was numbered and the one you are looking at does not have one, you should either avoid that print or make sure you are paying only an appropriate price for such an impression.

The discussion above refers only to numbered prints in the usual sense of an indication that a particular print is impression X out of YY made. Many antique prints have just a single number of them, and one of the most common queries we get on our web site or at Antiques Roadshow is what this type of number means. Are these “numbered prints?” No; these are not what is usually considered a numbered print. These single numbers which appear on prints are what is called “stock” or “catalog” numbers, for they are the number of the print in a stock list or a print catalog issued by the printmaker. The same stock number appears on every example of that print. This number was used so that if you are a framer or printseller and you want to order prints from the publisher, you just put in an order for print #26 or three copies of #12 and two of #48, and so on. 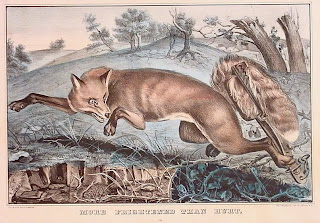 A stock or catalog number is typically a single number that appears on the print, usually somewhere along the bottom. These numbers appear on quite a number of the mid-nineteenth century prints by publishers such as Currier & Ives or the Kelloggs, and also on many of the later decorative prints from the late 19th or early 20th century, by such publishers as J. Hoover & Sons. This means nothing about the print other than at one time it was listed in a stock list or catalog and identified by the publisher with the number. It adds no value to the print and is unrelated to the fine art “numbered prints” discussed above.
Posted by Chris Lane at 8:12 PM