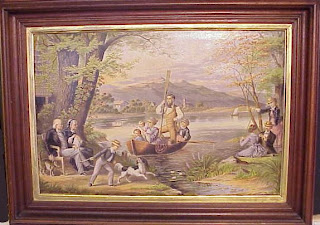 Today’s blog is about chromolithography. (more on other print types here) Chromolithography is a type of lithography, but in many ways it is a very different printmaking process. Chromolithographs are among my favorite types of prints, so I must apologize that this blog will be rather long-winded…

Strictly speaking, a chromolithograph is a colored image printed by many applications of lithographic stones, each using a different color ink (if only one or two tint stones are used, the print is called a “tinted lithograph”). The advantage of chromolithography, of course, is that this allows the production of colored prints without the cost, time, and risk of hand coloring. The skillful use of chromolithography allowed for the creation of images with every imaginable color and with an appearance that sometimes closely copied that of original watercolors and oil paintings. 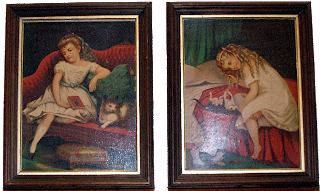 The wide-spread use of chromolithography in America began following the Civil War, and in the next half decade millions of chromolithographs were made and sold throughout the country. These prints became a customary decoration in homes everywhere, and indeed the last half of the nineteenth century has been called the period of “chromo civilization” in America. At the end of the century and into the early twentieth century, chromolithography was primarily used to create “cheap and cheerful” colored images, and these inexpensive and simple prints created a bad name for this process, giving “chromos” a reputation as the poor man’s prints. 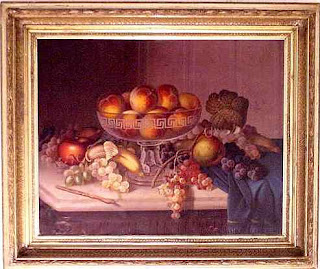 Chromolithographs were one of the most important artistic elements in the life of many Americans in the later nineteenth century, with published guides lecturing homeowners on the virtues of chromolithography and encouraging the use of these prints for the decoration of the home and education of the family. I think that chromolithographs have been too much neglected and unappreciated, and we are on a campaign to correct this by featuring these important prints at antique shows, having an entire section on the subject on our web site, and I have often promoted these prints on Antiques Roadshow.

Though something of a simplification, one can group chromolithographs into three basic types. First are the chromos used primarily as book illustrations or inexpensive "art." These can run from very fine quality (such as Owen’s Grammar of Ornament) to colorful, workmanlike images (such as late nineteenth century natural history book illustrations) to “cheap and cheerful” (like the many inexpensive prints intended for framing from the 1890s). Generally these chromolithographs were printed in the thousands and so are generally available today at reasonable prices. While not really “fine art” nor “collectible,” these can provide very nice prints for decoration.

The second type are sometimes called “French style” chromolithographs. These are prints which are intended to duplicate watercolors or paintings using translucent inks which create an image that has an airy texture and a soft blending of colors. This process can create lovely images which often look much like the original artwork. 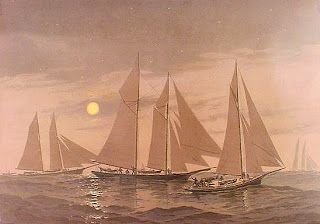 This type of print became very popular with artists in the 1880s and 90s. In this period a number of series of this type of chromolithograph were published with prints of sporting images by American artists, intended for framing and designed to help generate income for the artists and publishers. Among the most famous of these series are Alexander Pope’s Upland Game Birds and Water Fowl of the United States, Frederic Cozzens’s American Yachts, Their Clubs and Races, A.B. Frost’s Shooting Pictures, and the portfolio Sport, or Fishing and Shooting, with prints by a number of important American sporting artists. 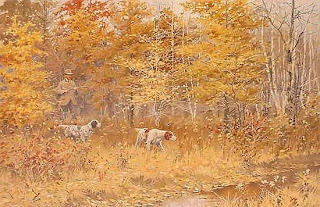 These prints could be kept as a “book,” but really they were issued mostly in portfolios (loose prints with covers) rather than bound as books. The primary intent was for these prints to be framed and that is how most of them survive to today. These prints sometimes were issued with titles printed on them, but more often the prints were published with the paper trimmed to the images, with any title on the cover or a separate label. These prints were intended to be framed so that they looked like original paintings or watercolors and they can still be used to that end. [ Click here to see an Antiques Roadshow appraisal of prints from A.B. Frost's sporting portfolio ] 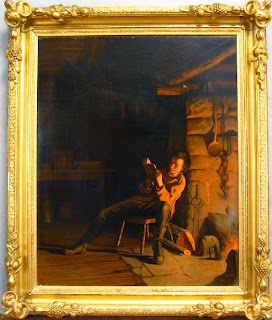 The final type of chromolithograph is my favorite. These are prints that were intended to duplicate oil paintings (sometimes called the "German style'). The inks used were heavy, oil-based inks which when applied in several layers give a texture like that of an original oil painting. These prints were almost never printed with any text on them (though sometimes the title or a name might appear unobtrusively at the bottom of the image), they were usually issued with no margins, and often mounted either on a canvas backing or a board. They were also almost always sold in a frame (sometimes quite elaborate) without glass. Altogether this makes their appearance very close to that of an oil painting. 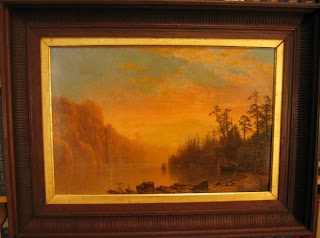 These prints are the ones that were designed to be sold to the middle classes so that they could hang these faux paintings in their home and benefit both from their sophisticated look and from being able to enjoy and learn from the artwork. Many fine paintings by American artists were issued in this format, such as Frederick Church’s Niagara Falls, Albert Bierstadt’s Sunset & Sunlight and Shadows, Jasper F. Cropsey’s American Autumn, and Thomas Moran’s Grand Canyon of Arizona. It was as much through the chromolithographic copies of these and other seminal American paintings, as opposed to the exhibition of the original work, that this art was disseminated to the general public. 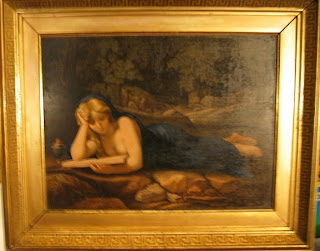 The leading proponent of this sort of chromolithograph was Louis Prang of Boston. Prang's chromos, which were "sold in all Picture stores," were highly praised and became hugely successful. Prang did more to create the market for chromolithographs in America than any other publisher, and his work also greatly shaped the output of other publishers around the country. 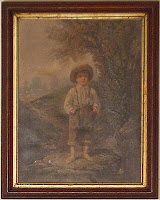 Prang's initial success came from his many small prints ("art bits"), which were collected by the public and usually kept in albums. He also developed a market for color printed specialty items like Christmas cards, which he is credited with inventing. Beginning in the late 1860s, Prang launched a magazine, Prang's Chromo: A Journal of Popular Art, and he began to issue chromolithographic copies of American paintings, which he called "Prang's American Chromos." He later expanded his output to include European paintings such as Correggio’s Magdalena. His first great success was with Eastman Johnson's Barefoot Boy, and eventually he issued about 800 chromolithographs of this sort, establishing an oeuvre unmatched by any other American chromolithographic publisher.

and Jay Last’s The Color Explosion

are also books anyone interested in the subject should read.
Posted by Chris Lane at 11:13 AM

Labels: chromolithograph, Print Processes, Prints as historical evidence, What is a print