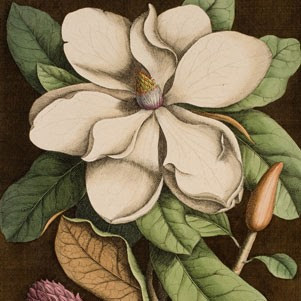 Until July 19th, there is an excellent exhibit at the New York Botanical Garden entitled: Georg Ehret: The Greatest Botanical Artist of the 1700s. This exhibition explores the life and work of botanical illustrator Georg Dionysius Ehret (1708–70).

Ehret was born to a Heidelberg farmer and he worked his way from obscurity and penury into the most prominent botanical circles in Germany and London. Among his patrons and friends were Sir Hans Sloane, Philip Miller and the famed Swedish botanist, Linnaeus, with whom Ehret noted he was “the best of friends.” The wealthy and influential Dr. Trew was Ehret’s most important patron. We owe Trew a particular debt of gratitude for sponsoring so much of Ehret’s work.

Despite his humble beginnings, Ehret rose to become the dominant botanical artist of the mid-eighteenth century, at a time when botany was the most important of the sciences. What sets Ehret apart in this talented and dense period of botanical illustration is the combined subtlety and boldness of his illustrations. His plants are rendered in great detail–-structure, seeds, variation in texture and color–-that can be contributed to his pioneering use of the microscope in botanical illustration. And beyond his accuracy, Ehret's work is among the most beautiful botanical art of any period.

The Botanical Garden exhibic gathers together magnificent examples of Ehret’s paintings from public and private collections, along with examples of his printed works. Among the latter are the important works published by Trew, Plantae selectae and Hortus nitidissimis, as well as a copy of the only work produced and published by Ehret himself, entitled Plantae et papilliones rariores, produced in London between 1748 and 1762.

For more information, visit the exhibit web site.
Posted by Chris Lane at 10:55 AM