The Kelloggs of Hartford: their lithographs and a new reference book 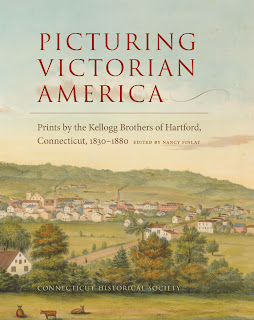 I am thrilled to be able to say that an important new reference book has just been published, Picturing Victorian America. Prints by the Kellogg Brothers of Harford, Connecticut, 1830-1880. This book, edited by Nancy Finlay and published the Connecticut Historical Society, fills a large gap in reference material about nineteenth-century American lithography.

From about 1830 until the mid-1870s, four Kellogg brothers from Hartford, Connecticut, in various partnerships, published probably at least as many as 4,000 popular prints. While their output is considerably smaller than the approximately 8,000 prints issued by the firm of Nathaniel Currier/Currier & Ives, the Kelloggs were their chief competitors. The Kellogg’s prints were typical of the popular print style: colorful, affordable and with images covering much the same range of topics as those of their New York City counterpart. Subjects included portraits, historical events, scenes of daily life, views, religious themes, politics, sports, military, animals, sentimental images and any other topic that might be of interest to the American public. (More information on the firm can be found on our web site) 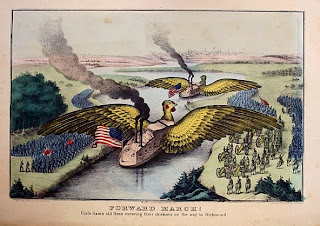 Nancy Finlay, the editor and author of one of the essays, has previously written a number of articles on the firm, and other references have appeared from time to time (including my article “The Kellogg Menagerie of Civil War Cartoons” from The Magazine Antiques, July 2006), but this excellent new book is the first comprehensive study of the Kellogg family and their copious output. Eight essays explore various aspects of the firm, their business, and nineteenth century lithography. The book is lavishly illustrated, with over 100 color illustrations and more than 1,000 b&w images. Besides the excellent essays, the book contains a wealth of other useful information, such a dating guide to the prints, biographies of the Kelloggs, a timeline of the firm, and an illustrated checklist of over 1,000 Kellogg prints. The book is available for $65

and it is a terrific value and an invaluable reference for anyone interested in nineteenth-century American lithography. 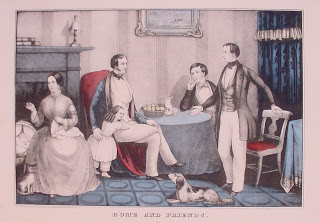 Nancy is the curator of graphics at the Connecticut Historical Society, which has a graphic collection of over 200,000 prints and photographs, including the largest collection of Kellogg prints in existence (over 1,100). Other important holdings in the CHS are prints by Amos Doolittle and Richard Brunton, drawings by John Warner Barber, and numerous 19th- and 20th-century views of Connecticut. Access to these collections are available through the research center (One Elizabeth Street in Hartford), where selections from the collections are also on view in permanent and changing exhibitions designed for adults and families. More information on the CHS and its collections are available on the society’s web site. 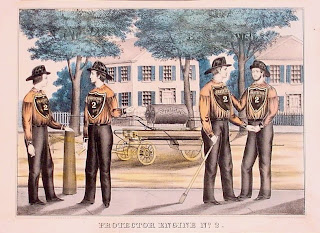 In anticipation of the publication of this wonderful volume, I asked Nancy to answer a few questions. I am most grateful to her for supplying the very interesting responses below…

How was the print collection formed?


The very first Kellogg prints to enter the CHS collection were donated by E.B. & E.C. Kellogg themselves in the 1840s. At that time, the Kellogg shop was right across the street from the Historical Society, which was located in the Wadsworth Atheneum. Although we’ve purchased a number of important Kellogg prints over the years, most of the collection has been the gift or bequest of collectors such as Samuel St. John Morgan in the 1940s and 1950s and more recently James Bonnette and Michael Shortell.


The Research Center at The Connecticut Historical Society is open 12-5:00 Tuesday through Friday and 9-5:00 on Saturdays. Prints in the Graphics Collection may be viewed in the Research Center during those hours; no appointment is needed. However, I always enjoy meeting with print collectors and other researchers who are working with the Graphics Collection. If you want to be sure that I’ll be available to talk with you, or if you’d like me to have material ready for you in advance, you should give me a call at 860-236-5621 ext. 236 or send an email to Nancy_Finlay@chs.org.


Are your prints accessible on line?


Currently, a few of our Kellogg prints may be viewed on our website, www.chs.org and a few more are included in our digital library at www.cthistoryonline.org. Our complete Kellogg collection should be accessible online early this fall when our new online museum catalog goes live. Stay tuned.

How did you end up at the CHS?


I was born in Connecticut and had a summer job just down the street from CHS when I was in college. I used to visit CHS on my lunch hour. In the late 1990s, when I heard that CHS was looking for a graphics curator, I knew this was where I wanted to be. The Kellogg collection was no small factor in my decision to come here.


My first love was European prints. I first became interested in 19th-century American prints when I was working in the Graphics Collection at Princeton University. Leonard Milberg was one of our big donors and Dale Roylance and I organized a major exhibition of his American landscape prints. I think it was Dale’s and Leonard’s enthusiasm for artists like William James Bennett and John Hill that first got me excited about their prints. 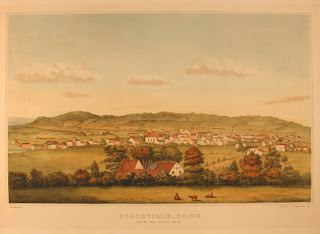 What are your favorite prints?


I have lots of favorite prints. I especially like the landscape prints that E.C. Kellogg produced in the early 1850s when he was working on his own. An example is "Plainville, Conn., from the South West," which is on the cover of Picturing Victorian America. It presents such an idyllic view of a small Connecticut town in the 19th century. It’s also a really fine example of color lithography. It makes you wish that the Kelloggs had done more with color printing. They really didn’t do very much. 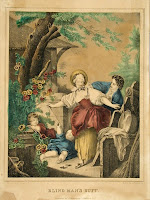 What print was the biggest surprise when you came across it?


Probably "Blind Man’s Buff," an early D.W. Kellogg print. It’s based on a painting by the rococo artist Jean-Honore Fragonard. The Kelloggs used lots of European sources, including works by contemporary artists and old masters, but it surprised me that they would reproduce a Fragonard. It’s just a little risqué, but perhaps they didn’t see it that way.


Some of your prints must have been acquired in poor condition. Do you have a program in place to conserve those that need it?


I’m so glad you asked! We have an ongoing conservation program and have just received a major grant from the Institute of Museum and Library Services for the treatment of our Kellogg collection at the Williamstown Art Conservation Center. It’s a two-year project and will begin in September 2009.


What do you see in the future for the CHS print collection?


I’m focusing right now on building a strong 20th-century print collection for CHS. We’re also collecting some 21st prints. CHS collected contemporary prints during the 19th century, when they acquired prints directly from the Kelloggs, for example. Then they got distracted by the Colonial Revival and didn’t acquire much contemporary material for quite a long time. It’s important to document the present before it becomes the past, to make sure that strong collections exist to serve the needs of future researchers.

How do you think the Kellogg prints compare to those by the more famous firm of Currier & Ives?


Unlike Currier & Ives, the Kelloggs didn’t do a lot of large folio prints. They specialized in small-format prints and marketed them largely to the lower middle class. If you compare Kellogg prints to similar small-format Currier & Ives prints, they hold up very well. Many of their prints, such as their Civil War cartoons, are extremely clever and original, and many of them are technically very accomplished, especially some of their prints from the mid-1840s.


What does a study of the prints of the Kellogg firm teach us?


It teaches us a lot of different things. They demonstrate very clearly that not everything in the 19th century was happening in major urban centers like New York and Boston. The Kelloggs were very much in the forefront in the development of the popular print in America. You can actually trace the evolution of the typical “Currier & Ives” print by examining the Kelloggs’ early work. The same thing was happening in other places, too, at about the same time. Everyone pretty much knew what everyone else was doing.

How many total prints do you think were issued by the Kellogg firm?


A lot more than we suspected at first. We now know of almost 2000 different prints that were issued between 1830 and 1880. There probably were at least 4000 prints, perhaps 5000. The Kelloggs also did a LOT of book illustrations, and we’re just beginning to learn about those.


Now that the Kellogg book is out, what is the next project you are working on?


I’ll never entirely stop working on the Kelloggs. I’d like to produce a complete catalogue raisonne of their work and put it online. And I’d like to find out more about their relationships with Hartford printers and publishers. Michael Shortell, who did so much work on our Kellogg project, is compiling a database of Hartford printers and publishers. He discovered account books from the firm of Belknap & Hamersley that include references to the Kelloggs. They tell you how big the editions were, how much they were paid, exactly what they did. I am working on some other projects, too, involving late 19th- and early 20th-century book design and Hartford architecture. I’d like to do something with Nelson Augustus Moore and his family, too. Moore was a photographer as well as a painter, and almost all of his children were also artists. I never run out of ideas. 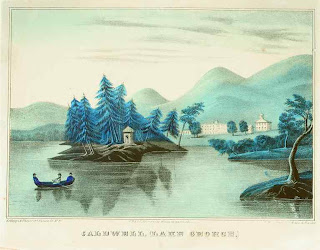