California as an island 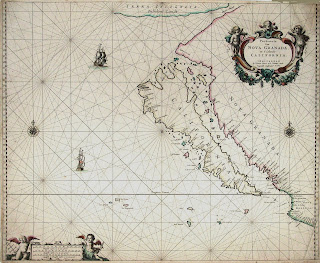 Old maps are filled with inaccuracies--rivers running a wrong course, cities placed incorrectly, coastlines lacking bays, and mountains, lakes and islands missing completely. The mistakes in old maps are one of the primary aspects which makes them interesting to us, and much of the history of cartography is the history of the correction of these errors. One category of cartographic error consists of what are called ‘geographic myths.’ These are geographic features that appear on the map but not on the earth; cities where none ever were, islands where there are but waves, lakes and rivers where there is dry land, and kingdoms of non-existent kings. Geographic myths populated most areas of the world and the history of exploration is filled with expeditions in search of chimeras that existed only on the map.

There were many reasons for the creation of these myths.... Delusions: many of the non-existent cartographic features came from beliefs with no real evidential basis, deriving from folk tales, legends, lies and hypotheses. Illusions: some myths were derived from the mis-perception of evidence. A cloud on the horizon might be seen as an island, or a native village perceived as a large, rich city. Confusions: other geographic myths were the result of evidence being jumbled or misinterpreted. A cartographer might misplace a lake from one region to another or an explorer might see a bay as a long-sought-for strait.

Once ‘on the map,’ geographic myths were very hard to get rid of. As Henry R. Wagner said, “There is nothing that has such an air of verisimilitude as a map.” Failure to find one of these non-existent places or first-hand evidence that one of them was non-existent would not always lead to their banishment from the map. They would often simply be moved to another place or the evidence would be ignored. Some of these myths lasted for over a century despite evidence of their imaginary nature. Whatever their source or longevity, these geographical myths had a profound impact on the history of exploration and the story of discovery cannot be told without an understanding of these cartographic features.

The "delusions, illusions and confusions" are one of the things I most enjoy about old maps, so I will, from to time, post blogs on some of these geographical myths. Probably the most famous of them is California shown as an island. 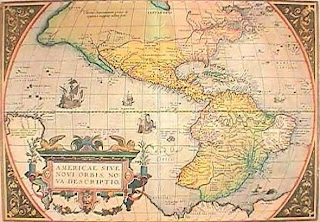 The earliest maps of North America showed California as a peninsula, based on the reports of Francisco de Ulloa who explored the Bay of California in 1539. The famous maps by Gerard Mercator and Abraham Ortelius showed a correct depiction of California in the late sixteenth century, but that was to change early in the following century.

In 1602, Sebastian Vizcaino sailed up the California coast, and Father Antonio de la Ascension wrote a journal of the voyage. Ascension claimed that California was separated from the American continent by the “mediterranean Sea of California.” It is not clear where Ascension got this notion, but this claim led to the mapping of California as an island beginning in 1622 with a small map on the title page of Antonio de Herrera’s Descripcion de las Indias Occidentales. The first folio maps to show this myth were by Abraham Goos’ in 1624 and by Henry Brigg’s in 1625. However, it wasn’t until the more important commercial Dutch publishers accepted the insularity of California that this notion achieved universal acceptance. The first of these influential insular renderings was by Jan Jansson, whose map of North America from 1636 graphically displayed this myth, and this was soon followed by all other major publishers such as Nicolas Sanson, Guillaume Blaeu, Pierre Duval, and Herman Moll. 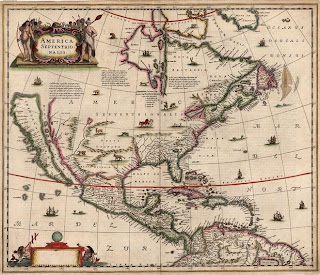 California was depicted on maps as an island for over 100 years, even after Father Kino established its penisularity about 1705. Beginning with Delisle’s map of America in 1722, some cartographers began again to show a peninsular California, but many cartographers continued to depict it as an island. Finally in 1747, Ferdinand VII of Spain issued a royal edict declaring California as part of the mainland, and soon after that insular California finally disappeared from the map. 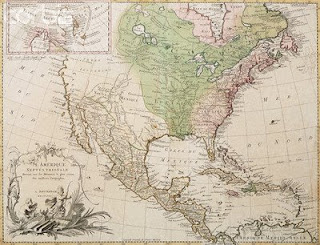 This geographical myth adds much interest to any of the maps showing it and these maps always sell for a premium over maps showing the more correct peninsular California. There are a couple good reference books available on the topic if you wish to learn more: Glen McLaughlin and Nancy H. Mayo's The Mapping of California as an Island, and Dora Beale Polk's The Island of California, the latter of which is the best available history on this topic.
Posted by Chris Lane at 12:20 PM