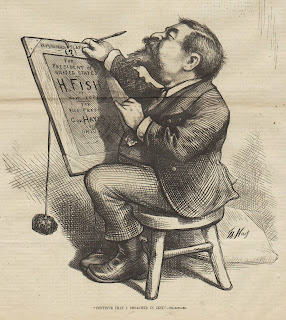 Thomas Nast is among the most famous American illustrators of all time, often called the “father of American political cartooning.” Nast was born in Bavaria in 1840 and at six years immigrated with his family to the United States. His father, a musician, had enrolled the artistically precocious child in an art school by age 12. Three years later, Nast was forced to leave his training to help support the family, fortunately gaining work as an illustrator for Frank Leslie’s Weekly. Five years later Nast traveled abroad to cover the Heenan-Sayers fight for the New York Illustrated News, later joining Garibaldi’s forces in Italy as a war correspondent. In 1862, Nast again became a war correspondent, this time for Harper’s Weekly Civil War reporting. His patriotic themes created such attention that President Lincoln cited Nast as his ‘best recruiting sergeant,’ and General Ulysses Grant remarked that Nast “did as much as any one man to preserve the Union and bring the war to an end.” 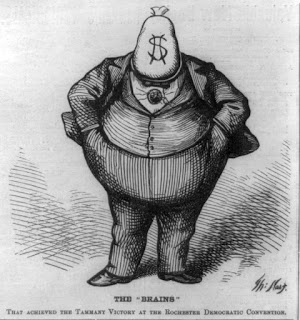 In the years after the War Between the States, Nast became the most significant illustrator of American political and social issues. His pointed cartoons exerted a great impact on public opinion. Every presidential candidate to gain his support won and his stature increased with the successful campaign in 1870-71 to bring down “Boss” Tweed of New York’s corrupt Tammany Hall and his political machine. More than a mere cartoonist, Nast was an innovator of images, popularizing or instituting many now familiar subjects such as the Republican elephant, the Democratic donkey, John Bull, Uncle Same, and Columbia. 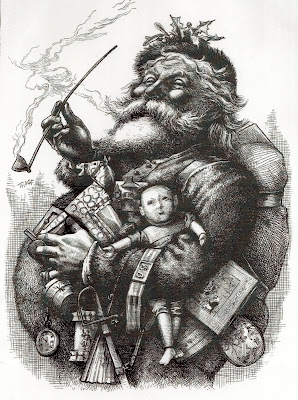 Perhaps his most lasting creation was the image of Santa Claus he developed in a series of cartoons in Harper’s Weekly from 1863 to 1886. Inspired by the description of St. Nicholas in Clement Moore’s 1823 poem ‘Twas the Night Before Christmas, Nast developed his image by using his own beard and rotund belly to eventually create the “jolly old elf” which is our present day image of Santa Claus. 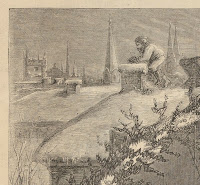 The first image of Santa by Nast was a cover illustration of “Santa Claus in Camp” on January 3, 1863, as well as cameo appearance in the corner of a double page “Christmas Eve” image. At this time Santa was fairly roly-poly and had a long beard, but the theme was more related to Santa’s support of the Union cause-—note the stars and stripes on his costume and he holds a puppet of Jefferson Davis with a noose around his neck.

As time went on, further developed his image, turning Santa into the figure we recognize today. He showed Santa with a workshop at the North Pole, and keeping track of children and their hopes for toys at Christmas. Overall, Nast created 33 cartoons of Santa, the last as a cover image for the December 25, 1886 issue of Harper’s Weekly. After that Nast severed his relationship with Harper’s, but fell into considerable debt through bad investments. In 1901, Theodore Roosevelt was elected President, and wanting to help out the man who had done so much for the country, he appointed Nast as Consul General in Ecuador. Nast died a year later of yellow fever. 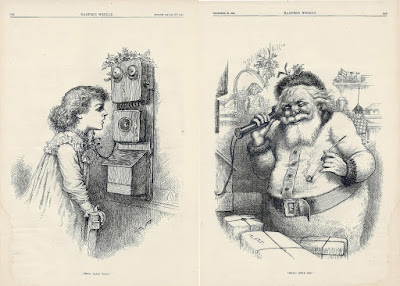 Click here to see a selection of Nast Christmas iamges