With the growing emigration of white Americans from “the States” to the Rocky Mountains and beyond in the 1860s, the Plains Indians found their traditional way of life fading. Not only did the emigrants eat up local resources, and kill many buffaloes, but the U.S. government began a systematic attempt to limit the Native Americans to limited reservations. Frustration led to sporadic Indian raids on emigrant trains and settlements, culminating in a number of “massacres” in the summer of 1864. 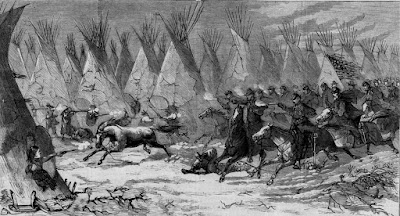 This prompted Colorado territorial governor, John Evens, to demand that all “peaceful” Indians to report to a number of military posts. Despite this, a peaceable group of Cheyenne was turned away from Fort yon and told to camp near Sand Creek, just to the north, where they would supposedly be safe. Unfortunately, Colonel John M. Chivington, commander of the First Colorado Regimen, believed he needed to “teach the Indians a lesson they would not forget, and he attacked the peaceful Indian camp, killing every man, woman and child possible, with some 150 Native Americans losing their lives in the notorious “Sand Creek Massacre.” 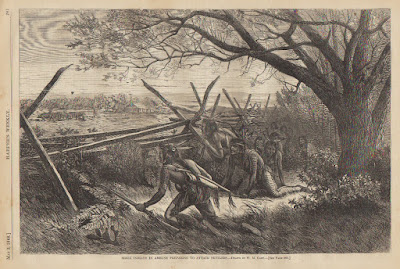 This naturally spurred more Indian braves to seek reprisal, with a number of raids along the Platte River emigrant route, to the east and west of Julesburg. . Beginning in early 1865, bands of Arapahoe, Cheyenne and Lakota warriors attacked nearly every ranch and station along the route and destroyed the telegraph line connecting Denver with the East. The settlers along the way did why they could, but many died or were captured, and their ranches burned to the ground.

One ranch owner, Holon Godfrey, decided to defend his home, located between today’s Sterling and Fort Morgan, as best he could. His ranch included a tower with portholes and he dug a well inside his defenses. In January 1865, Godfrey was raided, supposedly by about 200 Indians, but with the help of a visitor, his wife and children, he was able to repel the attack. As a result, the Indians called Godfrey “Old Wicked,” a name he liked enough to christen his ranch “Fort Wicked.” This secure post, about the only remaining settlement along the Platte River route, became a regular stop for the stage lines. 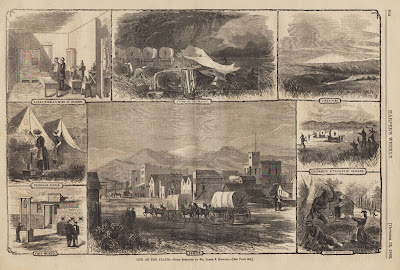 The following year, Harper’s Weekly, the leading American illustrated newspaper of the day, sent a party of report on the on-going Pike’s Peak gold rush. James F. Goodkins was the artist with this party and on October 13, 1866, Harper’s published a multi-panel print showing scenes from his experiences. The print included two views of Denver, a few scenes from Goodkins’ trip across the plains, and two fanciful illustrations of Indian attacks. 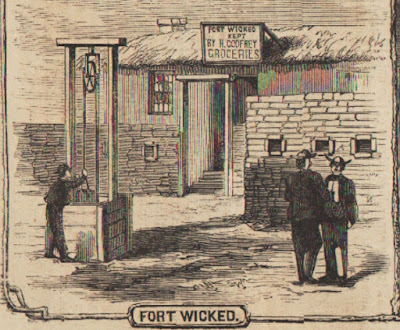 Also included was a small view of “Fort Wicked,” showing its fortified walls, the protected well, and a sign reading: “Fort Wicked. Kept by H. Godfrey. Groceries.” This print is a wonderful example of how the prints from the illustrated newspapers of the nineteenth century can provide us with first-hand images of aspect of our past not documented in any other way.