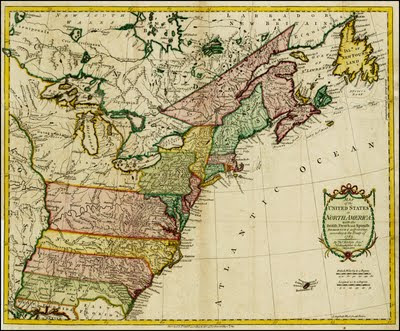 The United States was born out of the British Colonies, which had been founded in North America beginning in 1607. These colonies were originally limited to the lands along the Atlantic Ocean, east of the Appalachians, but with their 1763 victory in the French & Indian War, the British gained control of almost all of North America east of the Mississippi River. When the United States was formed after the War of Independence, it consisted essentially of the territory in eastern North American between the Great Lakes and St. Lawrence River in the north and Florida in the south.

At the beginning of the nineteenth century, the American western frontier consisted of the lands across the Appalachians, but east of the Mississippi. Citizens living in the area between the Appalachians and the Mississippi considered themselves westerners; for instance, Henry Clay from Kentucky was popularly known as “Harry of the West.” By the end of the century, however, the United States stretched from the Atlantic to the Pacific, and it was the trans-Mississippi region which was then the American West. 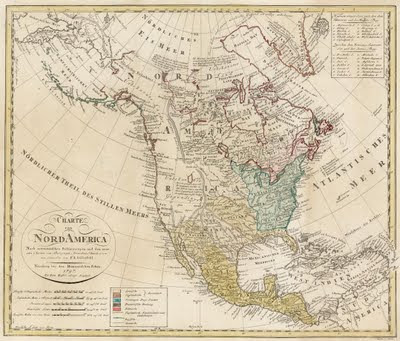 In 1800, most of the trans-Mississippi region was either Spanish or French territory. French Louisiana consisted of those lands in the Mississippi drainage to the west of the river, so lying between the Mississippi and the continental divide. The lands to the west of the continental divide were primarily Spanish, being the northern part of the Viceroyalty of New Spain, though the country north of the 42nd degree parallel was claimed also by the British.

So, in 1800, what would become the trans-Mississippi United States was divided into just three basic political entities, French Louisiana, northern New Spain, and (somewhat disputed) the British Columbia District in the Pacific Northwest. By the end of the century, this was all part of the United States and by then it was divided into 23 political units! The changing political configurations of the trans-Mississippi region between 1800 and 1900, as shown in contemporary maps, will be the subject of a series of blogs I will call “Shaping the Trans-Mississippi West.” Today I’ll look at the first decade of the 19th century. 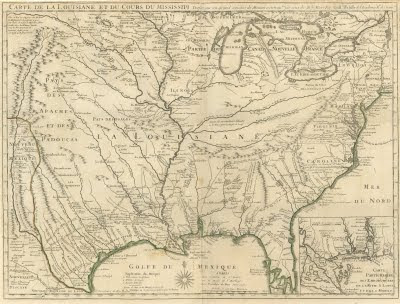 French Louisiana originally consisted of most of the drainage basin of the Mississippi, on both sides of the river. In 1764, with her loss at the end of the Seven Year’s War (called the French & Indian War in North America), France relinquished the eastern half to the British and the western half to the Spanish. France regained control of Louisiana west of the Mississippi from the Spanish in 1800.

In the first few years of the nineteenth century, Napoleon Bonaparte was involved in much conflict and intrigue in Europe and the French dominions abroad, and he faced imminent war with the British and total financial collapse. Looking for a quick solution for the latter, in 1803 Napoleon sold Louisiana to the United States for essentially 15 million dollars (about 220 million in today’s dollars), the equivalent of less than 3 cents per acre. 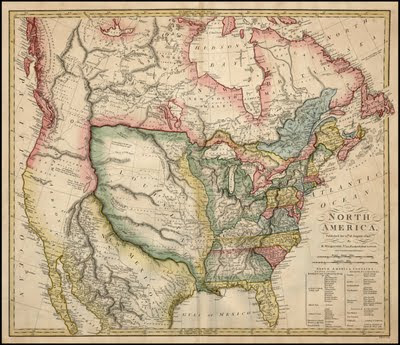 In this one transaction, the United States essentially doubled its size. The exact border between the Spanish lands in New Spain and Louisiana south of the continental divide were not clear, but that was settled by the Adams-Onis Treaty of 1819. There was also still dispute about the ownership of the lands in the Pacific Northwest. Little was known of Louisiana, so President Jefferson almost immediately sent out an exploring expedition under Meriwether Lewis and William Clark. Early maps were able to show a rough image of this newly acquired U.S. territory, but it wasn’t until the Lewis & Clark information and then later exploring expeditions that accurate details began to become available.

There are a number of common themes which we will see as we study the development of the trans-Mississippi West, one of which is that initially large territories were divided into smaller units as their population increased. Citizens would move into part of a large territory and would soon feel a desire for a more local government, which could take into account the particular needs and wants of that local population. These smaller units were usually also territories, but then over time they would usually become states (unless they were again subdivided). 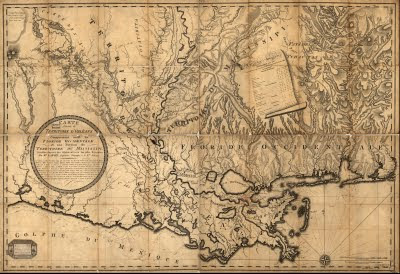 Thus it was that in 1804, that part of the Louisiana Purchase south of the 33rd parallel became the Territory of Orleans. This was, of course, the area where there had been a large and sophisticated population of Spanish, French and now American citizens, who felt that they had little in common with the vast, undeveloped parts of Louisiana to the north. The remainder of the purchase, north of Orleans, became the unorganized District of Louisiana, which then became the Louisiana Territory in 1805.

Thus the political situation of the trans-Mississippi West in 1810 was very like that in 1800, though now divided into four parts instead of three: New Spain, the disputed Pacific Northwest, the American Louisiana Territory, and the Territory of Orleans. Before another ten years were up, another unit would be broken off, as we’ll see in the next blog in this series.
Posted by Chris Lane at 6:32 PM