Linda, who has a blog at Artifacts Collectors recently sent me some questions for an interview, which she has now posted on her blog. I thought her questions were interesting and hopefully my answers were as well. There were a couple of follow-up questions from readers that were posted, one of which raised an issue of some interest to me.

The question was: "Do you collect or sell the original matrix too? Were they kept at all after the print is published? Can new prints be made from them?" I did send Linda my reply to this, which is on her blog, but I thought I'd expand a bit on my answers here in my blog. 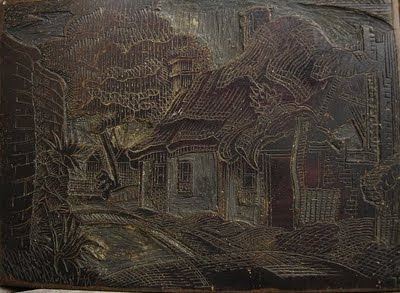 Original matrixes —wood blocks, metal plates and lithographic stones— do turn up from time to time and they are fun to acquire if you can. Interestingly, unless the image on the matrix is a famous one, they tend not to sell for a huge amount even though they are fairly rare. I think the main reasons are that they are a bit hard to display and, probably more importantly, they don’t look that great at immediate sight.

There are a number of reasons they usually don’t look that great. First is that they were practical objects, not decorative objects (though they were used to create decorative objects), and if they are indeed original matrixes, they will often show some sign of wear or age deterioration. Also, on plates and blocks especially, the design is not that easy to see. The designs were made to hold and transfer ink, not to display to the naked eye. 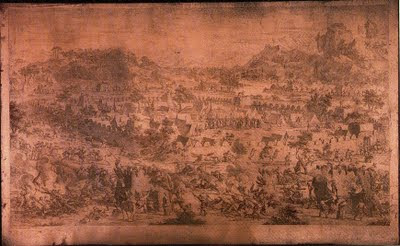 And finally, you have to remember that the image on the matrix was drawn backwards, so that the impression made from it would be right-way-round. This can make them look strange, especially for prints with text in them. This is one thing to remember, for we see with some regularity “plates” or “blocks” which are intended to look like original matrixes but are just decorative reproductions. The majority of these, however, are “right reading,” so they are usually easy to spot.

One of the reason that original matrixes are relatively rare is that -again because they were simply practical objects for a specific use, not ends in themselves- there was usually not a good reason to keep them around once the printmaker was done with printing them. If the printmaker was going to do another printing, then they would be saved, but if not, they took up too much room just to hang onto, and in some cases the material could easily be reused.

For copper plates, the metal itself was quite valuable, so once a plate had out-lived its printing life, it would usually be melted down to be used again. Lithographic stones, on the other hand, could easily be wiped clean and reused and as most originally came from Europe and the cost of purchase and shipping was substantial, this is what happened to most original lithographic stones. 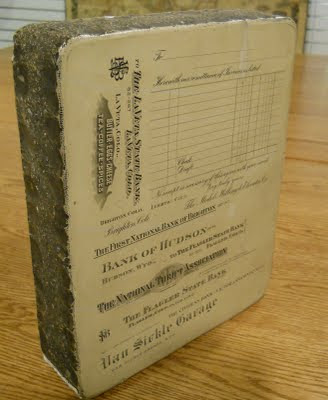 The one type of original lithographic stone you do tend to find from time to time are what I call “storage stones.” It was standard practice in the nineteenth century for images to be transferred from one stone to another. If you were running off a large number of images, it was easier to have the artist draw the image onto one stone and then transfer that image to other stones so that you could have several stones being printed with the same image simultaneously. 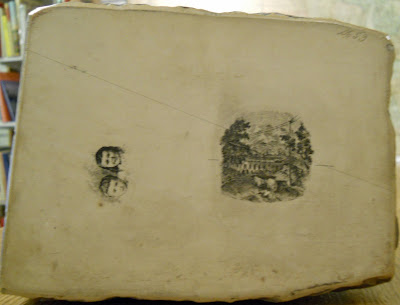 Publishers soon realized that they could save “stock” images for use in the future. Many images that were used on advertisements, certificates, bank notes, stationary, etc. would be used over and over again by a lithographer, so these images were stored on stones which were just a collection of these images, waiting to be used. As these were stones that lithographers kept around, a fair number of these turn up from time to time. They do look a bit odd, as they usually contain a strange variety of images scattered across the surface of the stone, but they are interesting and fun to acquire if you can.
Posted by Chris Lane at 12:00 PM