As part of my "western art" education, I have been reading up on a number of the artists who produced first-hand images of the trans-Mississippi region in the nineteenth century. I have recently come across the artist "Jack" Howland, who had a fascinating history.

John Dare Howland (1843-1914) was born in Zanesville, OH, leaving home at age fourteen to move to the West. There he hooked up to travel on one of the American Fur Company boats traveling up the Missouri to Fort Pierre. During this trip he he went on buffalo hunts and became a great favorite of the Sioux, especially as he made drawings for them on buffalo skins and their tepees.

He subsequently traveled to Fort Laramie, Wyoming, where he is believed to have painted some Indian portraits, then in 1858 to Colorado for the Pike’s Peak gold rush. He was unsuccessful as a gold seeker and it is said that he became so destitute "that he often had to earn a few pennies for food by dancing a jig for the entertainment-starved miners." Howland then briefly turned to trapping, but this too proved unprofitable.

This was all done by the age of 16(!), at which age he joined the First Colorado Cavalry and then was later active in the Indian Wars, eventually reaching the post of Captain of Scouts. He used his saved earnings to traveled to Paris to study painting, but returned to serve from 1867 to 1869 as Secretary to the Indian Peace Commission between the US and the Plains Indian tribes. 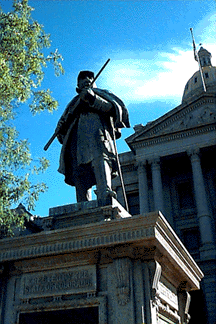 He returned briefly to Paris, but ended up settling in Denver, where he founded the short-lived Denver Art Club in 1886. He designed the Civil War monument at the Colorado State Capitol and became well known in particular for his paintings of buffalo.

He is said to have produced a number of drawings that were published in both Harper's Weekly and Leslie's Illustrated Newspaper but so far I have been able to track down only one of these, a drawing he made when involved with the Indian Peace Commmission. 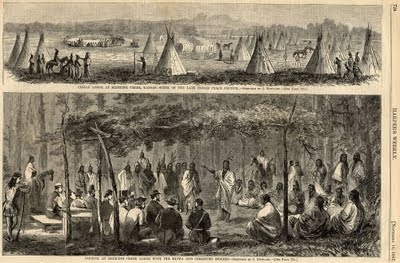 The 1860s saw many Indian attacks on EuroAmericans moving through and into the Great Plains. In an attempt to resolve this conflict, the United States set up a Indian Peace Commission which set out in the autumn of 1867 to treat with a number of Plains Indian tribes, including the Kiowa, Comanche, Plains Apache, Cheyenne and Arapaho. They met at a sacred Indian site, Medicine Creek Lodge, and signed treaties which obliged the tribes to move to the Indian Territory (now Oklahoma) in exchange for annual payments.

It was this Peace Commission for which Howland served as secretary and he made a number of drawings, two of which appeared in the print above from Harper’s Weekly, November 16, 1867. This is an excellent example of how the images in illustrated newspapers provide such an immediate and first-hand depiction on many of the events and personalities in the American West during the nineteenth century.
Posted by Chris Lane at 6:00 AM