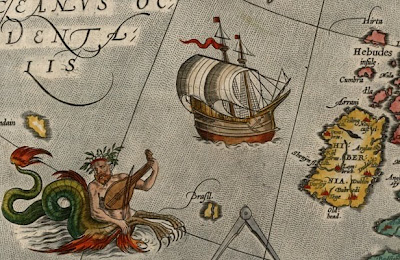 Last blog I talked about the legendary St. Brendan's Island which floated around the North Atlantic for many centuries. Another non-existent island in the North Atlantic which was based on legend was Brasil (also called Brazil, Bersil, Brazir, O’Brazil, O’Brassil, Hy-Brasil or Breasail). 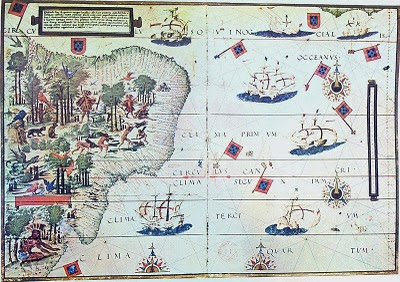 This is not to be confused with the country Brazil. That country was named after brazilwood, which was exported to Europe for its red die. As João de Barros wrote in 1552,

"When it came to the 3rd of May, and Pedroalvares [Cabral] was about to set sail, in order to give a name to the land thus newly discovered, he ordered a very great cross to be hoisted at the top of a tree, after mass had been said at the foot of the tree... and then he gave the country the name of Sancta Cruz... But as soon as the red wood called Brazil began to arrive from that country, he wrought that the name should abide in the mouth of the people, and that the name of Holy Cross should be lost, as if the name of a wood for colouring cloth were of more importance than that wood which imbues all the sacraments with the tincture of salvation, which is the Blood of Jesus Christ." 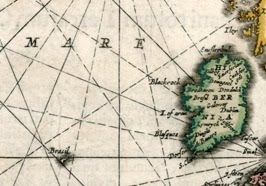 It is not clear where the name of the legendary island Brasil came from, but it may have its roots in the Gaelic "Hi-Breasail," which may refer to an old Irish clan or possibly an ancient demi-God. It could also come from from the Gaelic "breas-ail", meaning blessed, and so it might be connected with Brendan's Fortunate Isles. Whatever the source of the name, the island was a fixture in early Irish legend, first recorded as "O'Brasil" in the Voyage of Maelduin from about 1100 A.D. The legend is that Brasil was an island just to the west of Ireland which was constantly covered by mist, except one day every seven years when it becomes visible at sunset. Even today some of the inhabitants of Aran and the west coast of Ireland claim to have seen the island rise from the sea every seven years. 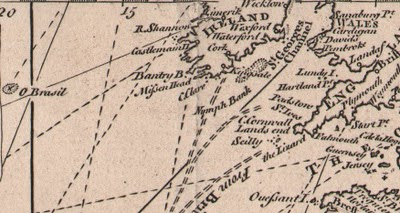 Beginning in the late fifteenth century, sailors out of Bristol are recorded by the Spanish representative to England, Pedro de Ayala, as sailing in search of Brasil. A letter by John Day from 1497-98 stated that Brasil had been visited by John Cabot, who had learned of it from earlier Bristol sailors. This probably refers to English voyages to either Newfoundland or Nova Scotia, and it is even possible that some of the early Irish references to the island reflect knowledge of North America. 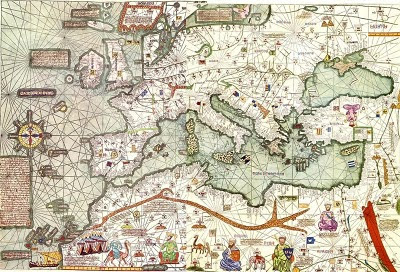 Brasil first appeared on maps in the fourteenth century, including in the Catalan atlas of 1375, where it appears twice. While St. Brendan's Island began to disappear from maps in the early seventeenth century, Brasil was a regular feature of the waters to the west of Ireland for over a century more. By the nineteenth century Brasil had morphed into "Brasil Rock" on the Admiralty Charts, before it was finally removed officially in the second half of that century. 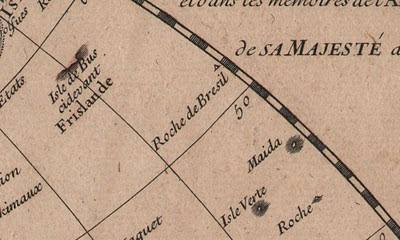