Maps of Pennsylvania. Why so unloved? 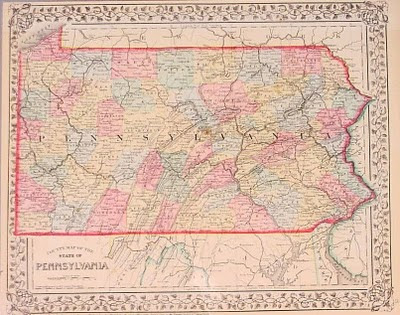 Last week I wrote the first blog in a series about differences in popularity of different antique prints, looking at the most popular Philadelphia view, the Bartlett engraving of Fairmount Waterworks. Today I'll talk about popularity of maps, but this time looking at one of the least popular types of maps, those showing the state of Pennsylvania. 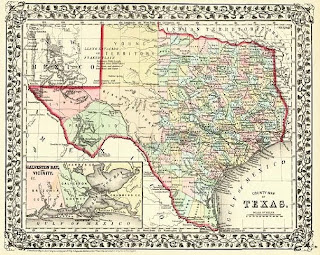 As I discussed in an early blog about the value ranking of antique prints & maps, there is a hierarchy of values for maps of the different states. At the top are maps of Texas; maps of the Lone Star state almost always sell for more than comparable maps of other states. By this I mean that if a map of Texas and some other sate, say Kentucky, are by the same maker and of the same date, condition, size, and visual appeal, the map of Texas will almost certainly be worth considerably more than the map of Kentucky. Some of this is because Texas has an interesting history and some of it is because Texas has a large population, but I think the biggest reason Texas maps are so popular is because Texans love Texas and they love almost anything related to their state, including antique maps.

Pennsylvania maps are not at the absolute bottom of the value ranking for state maps, but they are certainly in the lower half. Why is this? Pennsylvania has a very interesting history--I'd say just as interesting as that of Texas, and it has a large population--about half the population of Texas, but it still is the 6th most populous state. So why does it have such a low value ranking compared to maps of Texas? 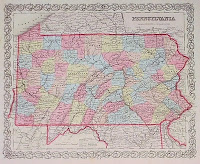 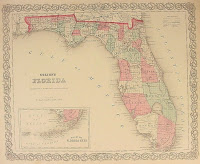 There are quite a number of reasons for this. One fairly mundane reason, though one that I think is fairly powerful in determining the value rankings of maps, is the shape of the state. I hate to say it, but Pennsylvania has a rather boring shape; it is pretty much just a standard rectangle, with an odd angle in the northwest and a few squiggles in the east. Compare that to Florida, with its swooping peninsular and delicate pan-handle, or Kentucky with its interesting hump-backed shape. I am convinced that maps of Pennsylvania would sell for more if the state had a more interesting shape and that Florida would not be so desirable if it were squared-off!

Not only is the shape of Pennsylvania boring, but it doesn't really change much over time. Early settlement was mostly along the east coast, but the shape of the colony by the Royal Charter was as a rectangle. The first map of the state was Nicholas Scull's monumental map of 1759 (above left). This map depicts only to the middle of the Appalachian chain of mountains, but it still looks almost identical to the map (above right) done sixteen years later by Nicholas Scull's grandson, William Scull, even though that map shows the colony right to its western edge. The shape of maps of Pennsylvania is really basically the same whether from 1759 or 1814 or 1905 or the present day. Many states changed shape as they moved from colony or territory to state, so collectors can have fun hanging maps that show the progression of the state as it changed over time, like Nebraska as it morphed from a vast territory to the moderately sized state of today. 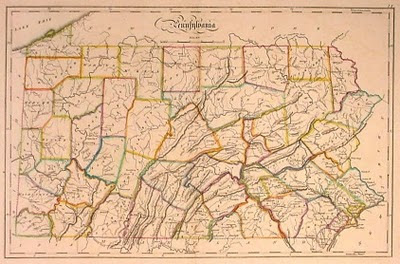 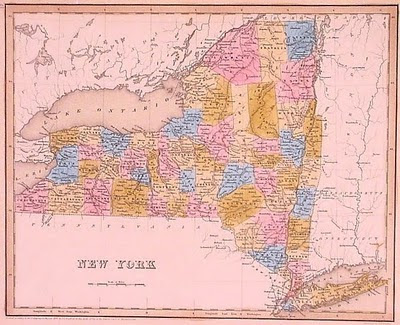 The result is that relatively few people really identify with the state as a whole. This is somewhat true of New York State as well, where citizens of New York City tend not to identify with the state as a whole, only with the city. This cuts out many of the people who you might think of as wanting New York state maps, so that state is quite a ways down in the value ranking. This contrasts with Texas and Virginia, where people in almost every part of the state identify with the entire state. There are, therefore, lots of people who want maps of Texas and Virginia (which is, like Texas, near the top of the state value ranking), but not so many who want maps of Pennsylvania or New York, even though both states have large populations. 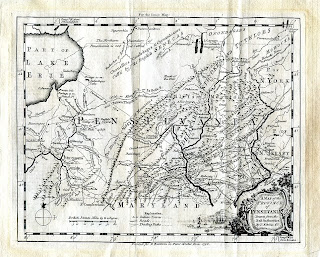 There are a couple other reasons that keep Pennsylvania near the bottom of the state value ranking. One is that there are lots of maps published of Pennsylvania ever since the eighteenth century. The colony was important early, so quite a number of maps were made of it before the Revolution. In the early days of the nation, the state was a political and economic powerhouse, so again a lot of maps were made of it. One final factor that keeps maps of the state relatively unpopular is the lack of a good reference book documenting the history of the mapping of Pennsylvania. States were there have been good references written about their maps always see a surge in interest, so maybe one of these days I'll write such a reference...

I have long tried to build up interest in the maps of Pennsylvania, for I think they are really unfairly unpopular. The greatest maps of the state sell for a fraction of even less important or rare or attractive maps of more popular states. However, there is one good thing about this, which is that a collector can at any time find a very good selection of early maps of Pennsylvania and those are priced very moderately. The collector maps of Texas or Virginia, in contrast, has a much harder time being able to get hold of a great state maps and will have to pay much more. So, Pennsylvania may get no respect from map collectors, but maybe that is not such a bad thing.
Posted by Chris Lane at 8:00 AM