In the course of researching a wonderful allegory we just acquired, I reread an interesting article by E. McClung Fleming, “From Indian Princess to Greek Goddess. The American Image, 1783-1815,” which appeared in Winterthur Portfolio III in 1967. Fleming wrote:

“In the national pride and aspiration of this era [after the Treaty of Paris], there was continuous need to refer to the new nation as a living entity with a palpable spirit. Following an ancient impulse, American s personified their country for a hundred purposes and occasions—[including] a nation interested in the arts and sciences on frontispieces of national magazines, a noble, attractive nation in prints to be placed on the walls of homes… The United States was actively and continuously represented by symbolic figures giving it a needed public image during the years from 1783 to 1815.” (p. 37)

He identifies four prototype ways in which America was symbolized in the first few decades of the nation's history: as an Indian princess, a plumed Greek goddess, as Liberty, and as Columbia. 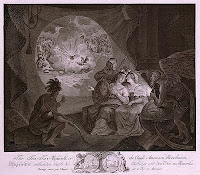 In the earliest images, America (both the North American continent and the nascent United States), was usually depicted as an Indian princess. This derived from the tradition of using an Indian for America when the four continents of the world were personified as Queens. This figure was used in medals, fabric and prints, often with the Indian princess having the attributes of the liberty cap, a rattlesnake, and the American shield and/or flag. 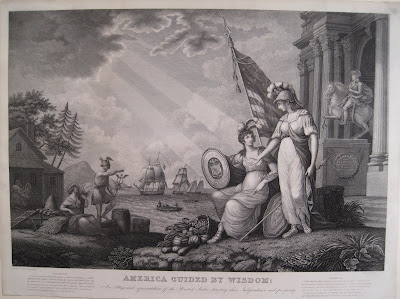 Plumed Greek goddess
The next version of America that appeared in prints was a goddess-like figure in Grecian robes and with a headdress plumed with ostrich plumes (instead of eagle feathers as for the Indian figure). This change was the result of the popularity of the Classical style which influenced American architecture, poetry, dress and the graphic arts beginning near the end of the eighteenth century. This Greek figure would often be accompanied by other classical figures and symbols like a pyramid, altar, or urn. A nice example of this is the print of "American Guided by Wisdom," which I discussed in an earlier blog. 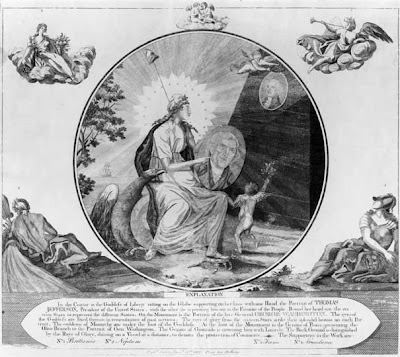 Liberty
The third style for America in prints was that of the Goddess of Liberty. Symbols of Liberty (the pole and cap of Liberty) were often associated with other figures representing America, but the American Revolution and the founding principles of the new nation were so closely identified with the cause of Liberty, that the figure of this goddess soon became, in effect, Americanized. She would often be shown with the American flag, shield, or eagle, or associated with stars representing the states. The Statue of Liberty is a prime example of this, as is the print showing Liberty holding a portrait of Thomas Jefferson while looking at another of George Washington hanging on a pyramid nearby. Liberty is crushing the symbols of monarchy under her foot and the American eagle is by her side. 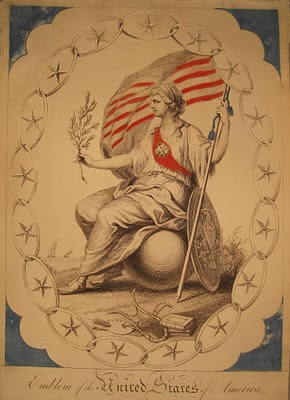 Columbia
The final form which Fleming discusses is America as Columbia, a figure whose name derives from Christopher Columbus. The use of Columbia as a personification of America began as early as the late seventeenth century, but became particularly popular at the time of the Revolution. As Fleming said, “The name recalled not only the fact of the discovery of America, but also the symbolic notion that America, through the voyage of Columbus, linked the Occident to the Orient in the great westward flow of civilization.” (p.59) Columbia did not have either the feathered or plumed headdress, but often either went bareheaded or had the helmet associated with Minerva. She tended to be dressed in classical white robes or sometimes the national banner. She also was usually accompanied by other symbols of America, such as the shield, flag, and eagle.

The print pictured above is a wonderful example of this form for America. It is an engraving by Samuel Harris issued in 1804. In it Columbia is illustrated as a proud and independent member of the family of nations of the world. The subtitle of the print promises "Peace with all nations, Partiality to none." This refers to the American attempt at the time to remain neutral between France and Great Britain. France, of course, had been America's great ally against the British in the Revolution, and despite the hiccup of the "Quasi-War" of 1798-1800, France and the United States had remained on friendly terms. There was always a strong pro-British faction in the United States and the government did try to keep a neutral stance even when in 1803 Britain declared war against France and Napoleon. The British were none too happy with this American stance and began to stop American ships in order to impress British-born, but naturalized U.S. citizens into the British navy. The tensions between the United States and Britain eventually led to the War of 1812, but in 1804, when this print was issued, Americans still hoped to be able to remain neutral, a sentiment nicely illustrated in this allegory.

In the print, Columbia sits as a strong independent nation, holding an American flag and a laurel branch, while the proud American eagle is emblazoned on the nation's shield. This theme is further emphasized by ships on the horizon exemplifying American commerce and various symbols in the foreground representing America's arts. A ring of seventeen chain links, each filled by a star, symbolizes the states of the Union (Ohio had become the seventeenth state in 1803).
Posted by Chris Lane at 8:00 AM