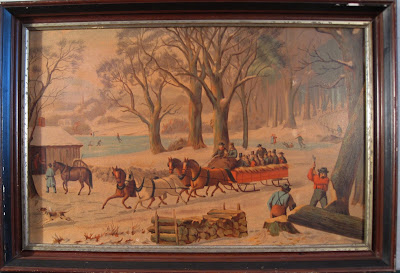 Last weekend I came across a delightful chromolithograph which I had never seen before. The image is a classic American winter scene and it probably dates from 1873, during the heyday of American chromolithographs. It is not of the very top quality, like Prang's best work; instead it is rather more of the "decorative" quality typical of less expensive publications. What makes this print particularly interesting, however, is that there is a wonderful label pasted to the back of the print by the firm of Durfee & Bushnell.

Durfee & Bushnell published this print as a premium for their monthly magazine entitled The Leisure Hour, which was described on the label as "An Illustrated monthly of Fashion, Floriculture, Music, and Entertaining and Instructive Reading." Durfee & Bushnell is not listed anywhere as a print publisher and I think they only published this one print as a premium for their magazine. I doubt they had the ability to actually produce the chromolithograph, so they probably had it printed by another New England firm.

What I was able to find out about Durfee & Bushnell is that they formed a partnership about 1873 to publish The Leisure Hour in Brattleboro. Edward Bushnell had previously worked in Brattleboro as a printer and he partnered with Charles A Durfee in this short-lived venture. The magazine did not last long, as described in Mary Rogers Cabot's Annals of Brattleboron,

“The magazine might have prospered but for the fact that Mr. Durfee suddenly left town, leaving the financial and editorial responsibility entirely upon Mr. Bushnell. Mr. Bushnell immediately suspended publication of the magazine.”

The label on the back of the print [click on picture at left to see larger image] is quite interesting in a number of ways. First, it indicates that Durfee & Bushnell went beyond simply publishing the magazine, for they advertised that they sold "Picture Frame, in any size or style, at the lowest prices," and that they also would mount chromolithographs for people (and indeed stated that this print was mounted onto canvas by the firm).

"Have Your Chromos Mounted!
We have facilities for mounting Chromos in the very best and most approved styles.
Canvas and Stretcher.
All work sized, varnished, and finsihed in the best manner."

Indeed, they insisted that one should only mount chromos on canvas and not put glass over them. I mentioned in my earlier blog that one often finds 19th century chromolithographs without glass, attributing this to the desire to imitate oil paintings, but Durfee & Bushnell offer another reason not to use glass,

"Don't Put Glass Over Chromos!
Glass should never be put over chromos, as there is a greenish cast to the glass that spoils the effect the artists intended it should have, while the varnish brings out the colors and preserves the picture.

As I have mentioned in other blogs, one of my main interests with antique prints is the business of printmaking and selling and this wonderful label gives us an insight into the way that one firm tried to make a go of it.
Posted by Chris Lane at 8:00 AM