In 1523-4, Giovanni da Verrazzano sailed along the eastern coast of North America, from Florida to Newfoundland, in the service of Francis I of France, thus becoming the first person to show definitely that the land discovered in the south by the Spanish was connected with the land discovered in the north by the English. Verrazzano's voyage was undertaken in order to find a route west from Europe across the Atlantic to the riches of the Orient.

In the sixteenth century, the American continent was seen as an impediment on the way to the Far East and much of the early exploration was done in an attempt to find the shortest route from Europe to China. After it was proved that there was no passage to the Pacific through the Gulf of Mexico, it was hoped that there might be a passage to the north of the Spanish discoveries in Florida. It was such a route to the Pacific that Verrazzano was looking for. 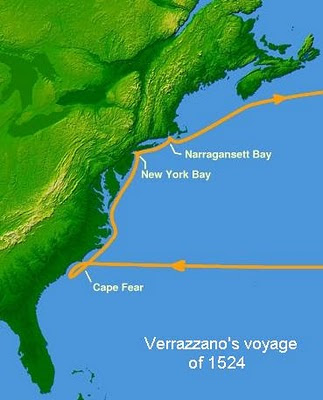 The map above, courtesy of Wikipedia shows the basic course of Verrazzano's voyage. However, his trip was not nearly as smooth as it is pictured. Because of the limits of the sailing ships at the time, Verrazzano could not simply sail along the coast as it ran to the north and northeast. Instead he had to tack up the coast, sailing northeast into the Atlantic and then tacking to the northwest to get back to the coast. With his zigzag coarse, Verrazzano missed a number of features along the coast, including the mouth of the Chesapeake Bay.

Each time Verrazzano tacked back, he must have hoped that he would soon find himself sailing in the Pacific Ocean, on his way to the Orient. With this hope firmly in his mind, when Verrazzano saw a large body of water across a narrow bit of land on one of his approaches to the coast north of Florida, he jumped to the conclusion that this was the Pacific Ocean. What he in fact had seen was either Pamlico Sound across the Outer Banks of North Carolina or part of Chesapeake Bay. Despite finding more land as he went further north, Verrazzano believed he had spotted the long hoped-for Pacific Ocean within easy reach of the Atlantic, promising easy passage to China.

The following account appeared in the margin of a letter written Verrazzano in 1524:

"We called it Annunciato from the day of arrival, where was found an isthmus a mile in width and about 200 long, in which from the ship, was seen the oriental sea between the west and north. Which is the one, without doubt, which goes about the extremity of India, China and Cathay. We navigated along the said isthmus with the continual hope of finding some strait or true promontory at which the land would end toward the north in order to be able to penetrate to those blessed shores of Cathay." 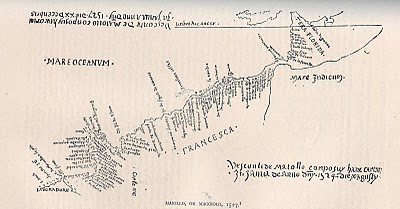 When Verrazzano returned to Europe, this belief was shown in two manuscript maps based on Verrazzano's expedition. One of these, from 1527, was by Visconte Maggilo and it was located in the Ambrosian Library in Milan until destroyed in the Second World War. A copy of this map is illustrated in Justin Winsor's History of America, Vol. 4, p. 39 (and is copied above). This shows the eastern seaboard of North America from "Terra Florida" To "Lavoradore," oriented to the south so that Florida is in the upper right. Just to the north of Florida is shown a narrow isthmus bordered to the east by "Mare Oceanum" (Atlantic) and to the west by the "Mare Indicum (Pacific). The other manuscript map, now in the Vatican Library, was by Verrazzano's brother, Girolamo, made in 1529. Girolamo's map clearly shows the isthmus and includes the legend "from this eastern sea you may behold the western sea and there are six miles of land between them." 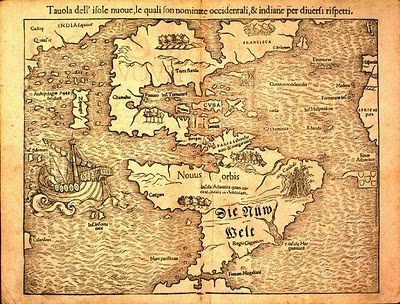 Once it appeared "on the map," this narrow isthmus between the oceans became widely accepted, for hadn't Verrazzano actually been there and seen the Pacific! The 'false sea of Verrazzano,' taking up most of what is really the North American continent, thus began to appear on printed maps of the New World. The most famous example of this is in Sebastian Munster's map of the American continents first issued in 1540, which graphically depicts Verrazzano's false sea.

The belief in the close proximity of the Pacific to the Atlantic somewhere in the southeastern part of North America had considerable impact on the history of exploration in North America, for subsequent expeditions went looking for a passage to the Pacific in the middle latitudes of the continent. One of the goals of Henry Hudson's explorations was to sail through such a passage to the Pacific, and when the original charter for Virginia was given, it included rights to "land throughout from sea to sea west and north-west," and the colonists were instructed to seek a river by which "you shall soonest find the other sea." 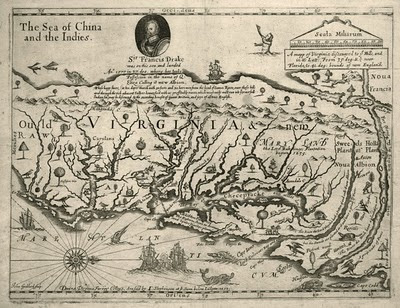 As late as 1651, John Farrer's map of Virginia indicated that it was only a ten day march from the Atlantic to the Pacific in that region, and it also shows a very short land bridge to the Pacific at the head of the Hudson River. The failure of the English to find the Pacific Ocean anywhere near Virginia soon led to the demise of this cartographic myth.