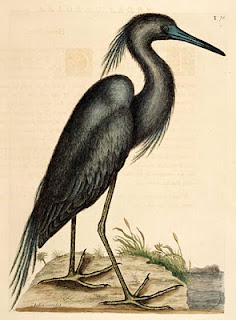 Today's blog is about my all-time favorite natural history artist, Mark Catesby. His work is not only less famous that that of John James Audubon, but the prints are less impressive in their appearance. However, to my mind there are no better American natural history prints. The very first print my wife and I bought was the Catesby print of the blue heron and we featured a Catesby print on the cover of the first catalogue for The Philadelphia Print Shop back in 1982.

Known as the “Founder of American Ornithology,” Mark Catesby was the author of Natural History of Carolina, Florida and the Bahama Islands, which was the first natural history of American flora and fauna. This monumental work was issued complete with 220 engraved illustrations between 1731 and 1743, and it was the first systematic description of American birds, animals and plants. 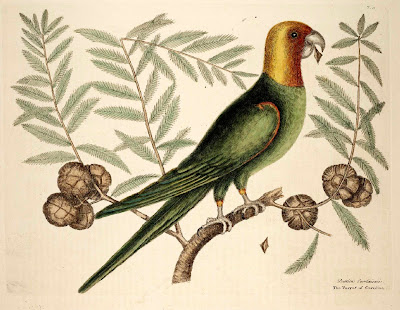 On two trips to America, in 1712 and 1722, Mark Catesby traveled throughout the backwoods of the southeast, collecting botanical samples for his sponsors in England and in his self-taught style making sketches of the wildlife that he saw. Upon his return from his second trip, his friends and sponsors encouraged him to publish a book of his drawings and notes, which he did beginning in 1731.

His Natural History was almost completely a one man show. Not only did Catesby do his own field research and sketches, but since he could not afford a professional engraver, he took etching lessons and did his own etching of all but two of the plates. His intense involvement in the work did not stop there, for Catesby even colored the plates of the first edition (the second edition plates were colored by Catesby’s friend George Edwards, a naturalist in his own right). 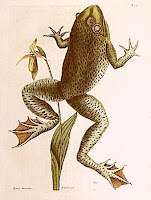 Besides being the first to produce an American natural history, Catesby was the first in a number of other items, viz. as the first to show the birds and animals in the natural habitats, and as the first to abandon the Indian names for his subjects, trying to establish scientific names based on generic relationships. For all these and many other reasons, Elsa Allen says, “the quality of the work was so superior to foregoing accounts that Mark Catesby ranks as the first real naturalist in America.” (American Ornithology Before Audubon, p. 465) 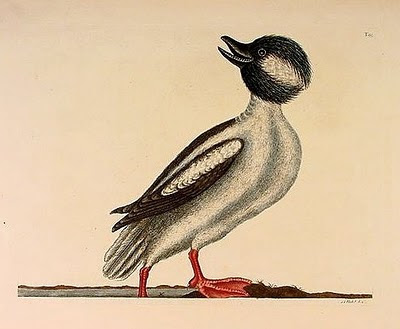 Catesby's publication had a significant impact on scientific circles on both sides of the Atlantic and the demand was sufficient so that there were two official later editions, published in 1754 and 1771. Though the text was not reprinted after the third edition, plates were run off in the early nineteenth century, proving the long standing appeal and importance of Catesby’s work.

Catesby's prints appeal to me partly because of the story of how they were made; here was real pioneering scientific work done in the backwoods of colonial America. If you look at Catesby's prints, they seem to express a sense of humor--the birds look to me like they are smiling or ready to wink at the viewer. What makes this interesting is that Catesby could not have taken the production of his Natural History anything but very seriously. He invested all his money and time and this work would establish him in London if successful. Still, it must be that his underlying sense of humor snuck into the images unintentionally. 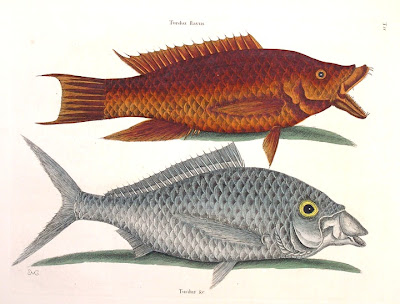 There are prints of birds, fish, animals and snakes. They range in value, with the birds being the most desirable and expensive, to the snakes which are very moderately valued for prints of such historic impornt. There are two birds, however, which sell for less than all the others, not because of what birds they are (one is the Robin), but because they are shown as dead. That is the subject of my next blog.... 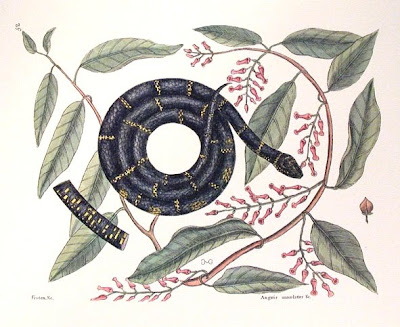