Two case studies related to the scarcity of prints

A previous post discussed the issue of how scarce antique prints are and how that affects value. Here are two interesting case studies which should help flesh out that discussion.

1n 1804, John Vanderlyn produced two large views of Niagara Falls. These prints were hand-colored aquatints superbly crafted in London. Their quality is first rate and they would have been fairly pricey at the time, aimed at market of wealthy art buyers. The expensive process of production, the ease of wear of an aquatint plate, and the limited number of potential wealthy buyers with an interest in Niagara Falls would all support the notion that only a small number would have been printed originally. I can only guess at how many, but I would think a number in the low hundreds would be reasonable.

This small number of originally produced Vanderlyn prints would have been reduced even further over the years by the exigencies of life affecting large, separately issued prints. Some would have been torn or mishandled and many that were framed would have been severely damaged or destroyed by the framing environment. One mitigating factor that probably means that the percentage destroyed might not be as high as with some other prints is the fact that these prints were expensive at the time and so would likely have been treasured and treated with care. Still, starting with a small pool of impressions and factoring in the inevitable attrition of such large, separately issued prints over time, we are left with the conclusion that it is likely that not many of these fine prints are still in existence.

In 1993 I curated an exhibition of the Charles Rand Penney Collection of prints of Niagara Falls at the Castellani Art Museum and authored a related collection catalogue. This was the culmination of over a decade of collaboration with Mr. Penney where we worked to make his the finest collection of printed views of Niagara Falls in existence. From the beginning I had looked for a pair of the Vanderlyn prints for Mr. Penney, as they would be one of the stars of the collection, but I had always understood that these prints were very, very rare and so I somewhat despaired of ever obtaining any.

Eventually, I was able to find a pair of these prints for the collection. The problem was that at some point in the past the pair had been torn neatly in half; however, we were able to join them and return them to an appearance that was quite good. (Click here to see image of one of these prints) I wanted a better pair in the collection, but given what I had read about the scarcity of these prints I thought we were lucky to find a nice looking, though damaged, pair. For instance, John Davis Hatch wrote an article on these prints in The Magazine Antiques (“John Vander Lyn’s Prints of Niagara Falls,” December 1990). He had systematically searched public and institutional collections in the United States and Europe and had found a total of only seventeenth impressions between the two prints. 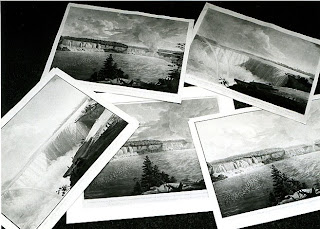 Life often surprises us and within about a year of the acquisition of the pair of damaged prints, I came across another perfect pair of the prints as well as a single impression of the “View of the Western Branch.” So at one time in our shop we had five examples of what was supposed to be very, very rare prints, with only seventeen previously known examples, and none of those five was included in the seventeen cataloged examples. So, within one year I had increased the known number of recorded Vanderlyn prints of Niagara Falls by almost 30%. It is still clear that the Vanderlyn prints are very rare (we have found only one other copy in the subsequent 15 years), but this does show that one should always take any statement about how scarce a print is with a grain of salt.

The other case study teaches a different lesson about scarcity, viz. that the scarcity of a print cannot be taken to prove too much. This example involves a very large-scale print of Pittsburgh by James T. Palmatary. Palmatary was one of the itinerant printmakers who traveled around the country in the second half of the nineteenth century making large views of American towns and cities. Palmatary’s work is unusual in that many of his views were exceptionally large, a number printed on multiple sheets including a view of St. Louis that measures 54 by 93 inches. One of Palmatary's views was a multi-sheet view of Pittsburgh produced in 1859 and measuring 43 by 85 inches, a view unknown to exist until it was recently discovered by Pittsburgh scholar Bruce Wolf. 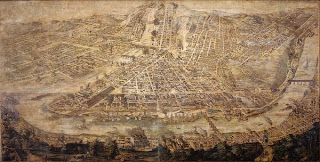 Palmatary's 'Birds-Eye View of Pittsburgh, Allegheny, Birmingham,….' is a magnificent and imposing print, the largest and only multi-sheet view of Pittsburgh. As promised in a newspaper announcement, the print "exhibit[s] to the eye every street, square and lane in the two cities and boroughs, with a correct and life like drawing of every public buildings, store, manufactory and private dwelling." This print was too large for framing, so instead it was issued in a format similar to the wall maps common in the middle of the nineteenth century. Typically the print would have been backed onto linen, the surface varnished for protection, and then the view mounted on rollers so that it could be easily hung. Palmatary intended to market this print primarily to businesses in the Pittsburgh region. As one Pittsburgh paper stated, “This view will supply a want long felt by the business community…” and the Daily Pittsburgh Gazette stated “This splendid work in the form of a map, mounted on rollers, sells for the small sum of $10, and will be a sine qua non in every counting house in the city.”

One of the especial features of this view is that the size and elevated viewpoint allowed many businesses to be identified with signs on their buildings. The print “will give a correct and life-like sketch of every public building, store, manufactory and private dwelling house, prepared from drawings taken on the spot, and so true to nature that the stores or dwellings in any particular locality may be recognized at a single glance, and even the signs of business houses distinctly read.” It would thus be “a perpetual advertisement of many of the chief places of business in the city…” Palmatary would have used this advertising angle to sell his print to the businesses so identified, and indeed it was reported that the print “has received a very flattering encouragement from the business community.”

There is only one known example of Palmatary's view, the one just recently discovered, and though there may be one or two others in existence, and perhaps some incomplete copies, it is obviously a very, very rare print. This, however, does not necessarily mean that not many were produced, as has been suggested by a number of authors. When the advertisements came out initially, Palmatary announced that he intended to print 600 copies of the view, 400 of which were to be sold by subscription. While he might not have been able to sell that many subscriptions, Palmatary probably would not have finished the project had his sales not been reasonably robust.

Almost all of Palmatary’s very large views, such as Chicago, St. Louis and Louisville, survive in only one or two known examples despite the fact that he must have sold enough prints to have stayed in business for so many years. These prints, including the Pittsburgh view, were too large to put in a frame and the examples backed on linen and mounted on rollers, like with the comparable wall maps of the period, would have had a very low survival rate. It would seem not unlikely that many of the businesses documented in the Pittsburgh print at one time had Palmatary’s view hanging in their shop, factory or offices, but that almost all of these prints have since suffered the fate of most paper items left unprotected over the decades. Indeed, Palmatary claimed to have made over 60 urban views, but only about a third of that number are recorded.

The lesson we can draw from this, like in the first case study, is that what we know about the apparent scarcity of a nineteenth century print can tell us only so much. Not only might there be a good number of other examples of the print in question that could turn up at any time, but even if not, we still have to be careful in drawing too wide a conclusion for the apparent scarcity of any nineteenth century print.
Posted by Chris Lane at 12:08 PM