I have just returned from Portland, Oregon, where I attended an excellent conference for the American Historical Print Collectors Society (AHPCS). About 60 members came from all over the US and Canada and enjoyed three days of informative talks, enjoyable tours and beautiful weather. 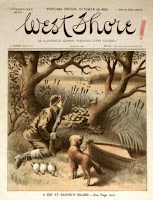 Naturally, the conference included talks on the theme of western prints. Doug Erickson, from Lewis and Clark College, discussed the artistic and cultural legacy of the Lewis and Clark expedition and Georgia Barnhill, from the American Antiquarian Society, highlighted the superb but often overlooked prints by Capt. Henry Warre. Portland dealer Elisabeth Burdon opened many eyes with her survey of the West Shore Magazine, a rare illustrated magazine published in Portland that included many interesting views of the region. I have always advocated the significance of nineteenth century magazine illustrations, and here was an important periodical about which I had previously known nothing. [click here to read more about this magazine ]

The western theme continued for the lectures on the second day, with Ron Tyler’s overview of prints of the American West. Ron is the director of the Amon Carter Museum, which has one of the country's best collections of western art (watch for a forthcoming blog on the museum’s print collections). Ron is also the author of Prints of the West, the best general reference on the topic. Despite having read that book several times, as usual I still learned a few new things from Ron. I was completely unfamiliar with the other topic, which was Carleton Watkins’ fabulous nineteenth century photographs of the Columbia River gorge. The talk was by John Laursen, coauthor on the beautiful book Wild Beauty illustrating these and other photographs of the Columbia River.

Speaking of the Columbia River gorge, we had a wonderful day trip by bus up the gorge on Saturday, with a erudite and witty tour guide, Roger Wendlick, who also treated us to an interesting talk on the camp sites of Lewis & Clark (many of which he pointed out on our trip up the river). Other interesting and fun activities at the conference included a panel discussion on conservation and framing of prints and visits to the Multnomah County Library (home of a complete, first edition Audubon Birds of America), the Oregon Historical Society and the Gilkey Center for Graphic Arts of the Portland Art Museum. There was also plenty of time for socializing with other members of the AHPCS (a varied, knowledgeable and enthusiastic group), including a print show & tell and the annual auction to raise funds for the AHPCS.

I will mention three other items of note, all of which I will expand on in future blogs. First, my book on nineteenth century printed views of Pittsburgh, Panorama of Pittsburgh, was selected for the Newman Book Award, given each year to the outstanding print reference chosen by the AHPCS. The timing on this is good, for the announcement was made that the next AHPCS conference will be in Pittsburgh in May 2010 (I’ll be giving a talk on prints of Pittsburgh at that conference). Finally, it was announced that former President Wendy Shadwell had left in her will a substantial legacy to the AHPCS. The organization has already received $175,000 from Wendy’s estate and the board will be considering over the next year how best to use these funds to honor Wendy and her wishes. More anon…
Posted by Chris Lane at 3:14 PM