All of my academic and professional life I have lived in the northeastern part of the United States. This region is the location of many of the finest print collections in the country, however, there are some institutions elsewhere which house print collections of the first rank. One of these is the Amon Carter Museum in Fort Worth, Texas.

This museum is the legacy of Amon G. Carter, Sr. (1879-1955), who left instructions for his heirs to establish a museum to house his collection of paintings and sculpture by Frederic Remington and Charles M. Russell, as well as to collect, preserve, and exhibit the finest examples of American art; as well as to foster the study of and increase awareness of American art. The museum was opened in 1961 in a building designed by Philip Johnson, who also designed the 2001 expansion to the museum. 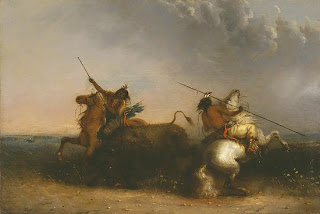 The first director of the Amon Carter was Mitchell A. Wilder, who saw as one of his primary goals to correct the lack of scholarly information about American art, especially Western American art. Towards that end, the Amon Carter held exhibitions, with scholarly catalogues, on Remington, Russell, Peter Rindisbacker, Albert Bierstadt, Paul Kane and others. The museum continues in that educational tradition to today, and has held many impressive exhibitions accompanied by scholarly catalogues. [Click here to see list of Amon Carter exhibitions]

In terms of its holdings, the museum has collected a wide range of American art with the intention of putting the original Remington and Russell items into their proper context. The Amon Carter’s collections embrace American art from the early nineteenth century until the 1960s, including paintings and sculpture, with a particular strength in Remington and Russell, as well as other artists of the American west. Also in the museum a huge collection (hundreds of thousands of objects) of photographic prints, negatives, etc., which covers from the beginning of the medium to the present day.

And, of course, the Amon Carter houses a superb collection of art on paper, including watercolor and drawings (many by early American explorer-artists), and more than 5,700 prints. The print collection has an extensive selection of twentieth century art, with complete sets of prints by George Bellows and Stuart Davis, as well a strong collection of prints from the artists of the Fort Worth circle (1940s and 1950s) and the Tamarind Institute.

In terms of “antique prints,” the museum’s collection related to “Western Americana” is as good as any in the country. Included are prints from all the major series of Indian portraits (Bodmer, Catlin, McKenney & Hall, J.O. Lewis), as well as prints from major explorations, and landscapes and genre scenes of the American West, including bird’s eye views. Such views of Texas locations is the subject of a wonderful, on-line exhibition. While this is probably the Amon Carter’s particular strength in terms of antique prints, it has many others, including prints by John James Audubon, American historical prints, a terrific collection of Currier & Ives prints, and views of other parts of the country (for instance a set of the Hudson River Portfolio)

The Amon Carter’s collections are accessible to some extent through their web site (such as the Texas views exhibit), in their regular exhibitions, through their many scholarly catalogues, and for researchers who can view prints in person with an appointment. The prints collection continues to grow through acquisitions and through gifts, especially via the Amon Carter Print Guild support group. There is a dedicated area of the museum for print exhibits and an exhibition of the museum’s antique Western American prints will open this autumn. Given the quality of the collections and the history of excellence from the Amon Carter, this exhibition should be well worth seeing!

Coming soon, a profile of the director of the Amon Carter, print expert Ron Tyler…
Posted by Chris Lane at 3:09 PM

Labels: Print groups and institutions, Prints on the web