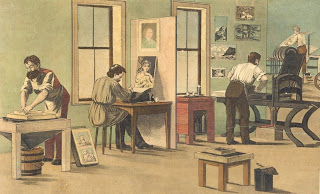 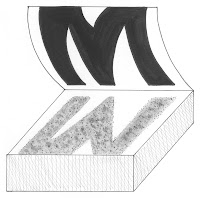 A lithograph is created by drawing an image onto a stone (lithography = “stone-drawing”) or metal plate using a grease crayon or a greasy ink called tusche. The process is based on the principle that grease and water do not mix. To create a lithograph, the stone or plate is washed with water--which is repelled by the crayon--and then with ink--which is absorbed by the crayon. The image is printed onto the paper from the stone or plate, which can be re-inked many times without wear. 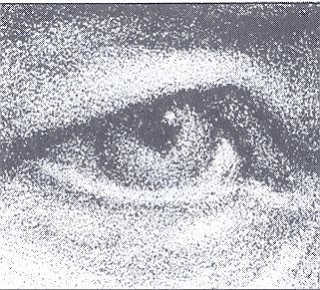 As the process is planographic, no platemark is created when a lithograph is printed. While zinc plates were used late in the nineteenth century, most antique lithographs are printed from Bavarian limestone (other types of limestone were tried, but that from Bavaria works the best). The tuche holds to the stone in a pattern that follows the grain of the stone, so an examination of a lithographic image under magnification shows that stone grain (this is the way one can distinguish an original lithograph from a collotype, which is a planographic process but shows the pattern of the photographic gelatin used to create the image).

Lithography was invented by Alois Senefelder in 1798 but didn’t come into general use until the 1820s. After that time lithography quickly replaced intaglio processes for most illustrative and commercial applications, for the design was easier to apply to the stone or plate, it was much easier to rework or correct a design, and many more images could be produced without loss of quality than in any of the intaglio processes. 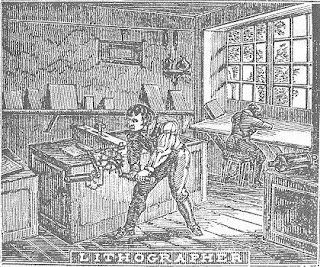 Most lithographs are printed with a black or sepia ink, and many were issued that are hand colored. A tinted lithograph is a lithograph whose image is printed from one stone and which has wash color for tinting applied from one or two other stones. Sometimes, hand highlight color is added to a tinted lithograph. A chromolithograph is a colored lithograph, with at least three colors, in which each color is printed from a separate stone and where the image is composed from those colors. I'll post a blog specifically on chromolithographs in the near future.