In the future I will be posting blogs on current print organizations, but this blog concerns a group that disappeared over a century and a half ago...

The American Art Union (1839-1851) was an organization created to support contemporary American art and to develop a popular appreciation of it by the American middle class. In 1838, James Herring opened his Apollo Gallery in New York City, as a venue for the display and sale of American art. Herring felt that American pubic needed to be exposed to and enlightened about American art, both for their personal and social improvement, but also to support struggling American artists. Hearing of the Edinburgh Association for the Promotion of Fine Arts, as well as other art unions that had been formed in Europe earlier in the decade, in 1839 Herring decided to form an art union, which he named the “Apollo Association for the Promotion of the Fine Arts in the United States.” It was renamed the following year as the American Art Union. 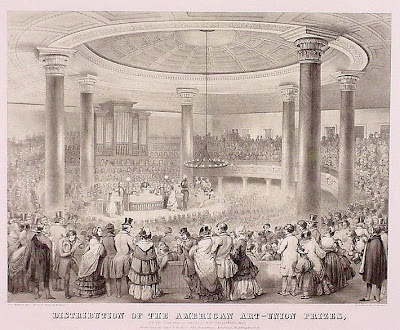 Similarly to the European art unions, individuals could join the AAU for a small membership fee, and these funds were used to purchase and commission original paintings from American artists, as well as to produce engravings from these works to be distributed to the membership. Members were entitled to receive an annual members’ engravings, as well as a chance in a lottery of paintings and prints purchased by the AAU for this purpose. The association also held a continuing exhibit of American art at its “perpetual free gallery.” While the union had a rocky start, it expanded greatly, increasing to almost 19,000 subscribers in 1849. However, within two years it was forced to fold.

The AAU is best known today for the thirty-six engravings it published based on the paintings of some of the most luminous names in American art, e.g. George Caleb Bingham, Thomas Cole, F.O.C. Darley, Asher B. Durand, and William Sidney Mount. The association is especially important for the seminal role it played in stimulating American art and for spreading an awareness of this art throughout the country. With its gallery and thousands of subscribers, the AAU probably had more to do than any other force with the success of many of America’s nineteenth century artists and the popularization of their work. The legacy of the American Art Union is immense and its prints are an important part of that. 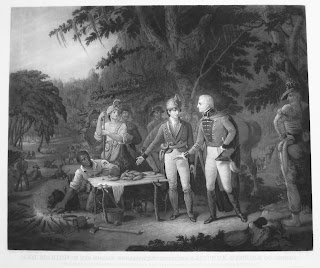 John Blake White. "Gen. Marion in his swamp encampment inviting a British Officer to dinner." 1840. 16 5/8 x 20 3/8. Mezzotint by John Sartain. The first of the annual subscription prints, issued when the organization was still the Apollo Association. The "Swamp Fox" extends courtesy to an enemy officer. 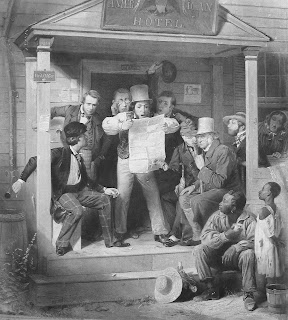 Richard Caton Woodville. "Mexican News." 1851. 20 1/x x 18 1/2. Engraving by Alfred Jones. Woodville has captured a scene of American life, as news of the Mexican war is read to townsfolk on the porch of a hotel. 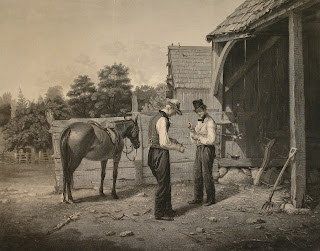 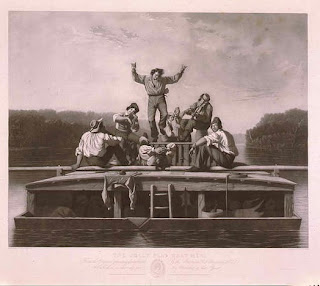 George Caleb Bingham. “The Jolly Flat Boat Men.” 1852. 18 1/2 x 24. Mixed engraving by T. Doney. Probably the most famous engraving issued by the AAU, this is a superb example of the work of Bingham, whose genre scenes present a quintessential picture of American life in the nineteenth century.
Posted by Chris Lane at 2:18 PM