Another blog by Kelli, this one looking at the attraction of uncolored prints... 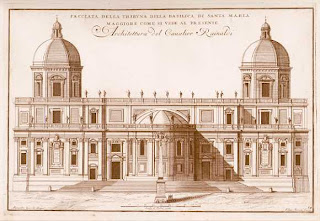 When it comes right down to it, there’s nothing more classic than an image in black and white. There’s a good reason that women return to the “little black dress” every season, and that black-and-white photography survives as a fine art form. Color is great, but it’s hard to beat the elegant simplicity that you get without it.

When decorating with prints, many people move automatically toward brightly-hued botanical prints or vibrant genre lithographs. Black-and-white prints often escape notice, so today, we’re pulling them to the front of the line.

For anyone interested in design, the black-and-white image offers a chance to appreciate the subject matter in a pure and distilled form. Architectural engravings, for example, showcase the essence of buildings: their elevations appear crisply laid out on clean paper, and details sing. On Domenico de Rossi’s eighteenth century engravings of buildings in Rome, for example, Baroque structures stand boldly and timelessly against a plain background. For lovers of good typography, Rossi’s prints are a bonanza: bold black Roman letters mix with beautifully flourished italics to form clear, lovely titles. 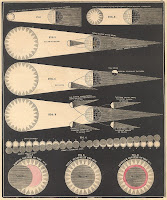 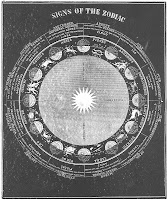 Black and white was also a prime combination for clear communication of information. In Asa Smith’s astronomy textbook pages, maps of the heavens are presented as white stars on a black background. Stars pop and constellations sing on a solid black sky, labeled in white block capitals. Hung in a group of four, the details on these prints form a bold, nearly abstract pattern against the wall. 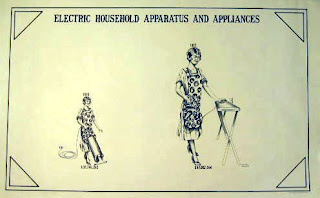 In one set of prints that we have here at the shop, the graphics and typography are clear as day, even if the subject matter is a little foggy. We’re not sure exactly how these prints may have been used , but we’ve wondered if, perhaps, they were some sort of presentation graphic, a sort of proto-PowerPoint. They illustrate changing statistics, mostly domestically based, such as the increased use of electrical household appliances. Their charm comes from the unusual use of pictures at different scales to communicate different numerical figures. The small number from one year is represented by a small, aproned housewife holding an electric iron; the increased number from a later year appears as a larger version of the same aproned housewife (at any size, the pattern on her apron is marvelous!). Each figure and number stand out boldly in black ink against a plain white background, accentuating their quirk and whimsy. 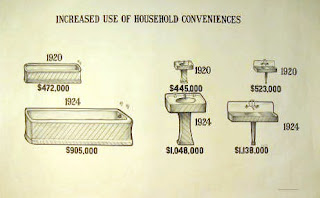 Whether you’re aiming for a touch of elegance, a pop of pattern, or a note of whimsy, black-and-white prints offer a surprising range of decorating accents.
Posted by Chris Lane at 2:24 PM

Labels: Decorating with prints, Tips for buyers and collectors