What does it mean to collect antique prints?

Collecting does not have to involve spending large sums of money; large expenditure is neither sufficient nor necessary for collecting antique prints. Though an individual unwilling to spend a reasonable amount of money when the opportunity arises cannot be thought of as a collector, he or she certainly can collect antique prints and spend less than $100 a year. Collecting does not mean buying only “important” prints; every collection has its own universe of appropriate prints and each of these is important relative to the collection even if they are not “important” in a more general sense. Finally, collecting does not mean necessarily having a large number of items in one’s collection; a collection can consist of a very few pieces or more than a thousand. Collecting is best described not by how much one spends, nor by what one acquires, nor by the number of pieces, but by the way in which the collection is developed. A collector can be distinguished from an acquirer by the approach he or she takes to collecting. There are three components to a collector’s approach: criteria, knowledge, and preservation.

The most important aspect of a collector’s approach to acquiring prints is the establishment of criteria for collecting. Every buyer wants to acquire prints which appeal to him or her and to avoid those which are not pleasing. A collector, however, uses a more rigorous set of standards than simply personal appeal. Someone who purchases any print which catches his or her fancy is an acquirer. A collector selects prints using a set of criteria which include rules for choosing prints based on theme, publishing history, and condition. Today I'll discuss the collector criterion of having a collection theme. 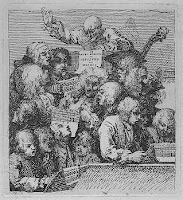 Theme: The most important collecting criterion is that of a theme or topic for the collection. The theme of a collection is that characteristic which the prints share that turns the assemblage into a single entity, rather than simply a group of prints. A theme can consist of a single subject, such as views of Niagara Falls; a printmaker or group of printmakers, as in prints engraved by Philadelphia craftsmen or prints after Hogarth; a printmaking process, such as mezzotinting; or any other shared characteristic, such as newspaper bonus prints.

A theme can be comprehensive for the chosen subject, or limited to prints issued in a certain period, such as prints published before the nineteenth century. Pretty much any subject related to prints can be a theme; the important notion is that a theme limits the universe of prints to be collected; a theme is what ties the individual prints together into the united entity which is a collection.

Unless a collector chooses an extremely broad subject, most prints will fall outside of the thematic scope of his or her collection. Generally the collector will need to do a fair amount of looking and exploring in order to find prints which fit the chosen theme. Indeed, the search for appropriate prints is a significant component of collecting. All collectors enjoy the excitement of the hunt and the thrill of discovery. One certainly would not want to set the theme so narrowly that no prints could ever be found which fall within the range of the collection, but there should be enough of a limitation that some aspect of a search or hunt is retained.

Anyone interested in starting a collection should choose a theme carefully. It should be of interest to the collector, for exploration of the theme can be wonderful source of enjoyment. Also, the beginning collector should consider a theme for which relevant prints are both available and affordable, so it is a good idea for a beginning collector to try to learn about the cost and availability of prints which fall within its scope. One might be very interested in large, bird’s-eye views of Chicago, but these prints are both scarce and expensive, so only someone with ample resources will be able to build a meaningful collection of these prints. It might be just as interesting to collect any views of Chicago, including wood engravings from newspapers like Harper's Weekly and that would widen the field considerably, but still allow for the acquisition of a block-buster bird's eye view if one came along at an affordable price.

The theme that a collector chooses is the foundation of the collection and so the collector should spend time in selecting the subject. The theme can, of course, change over time, and the collection can be culled or expanded as the collector's interest changes. Selecting a theme, however, is not the only thing that makes a collector, and in a future blog I will discuss other criterion.

(Click here to go to part 2 of collecting antique prints)
Posted by Chris Lane at 11:20 AM