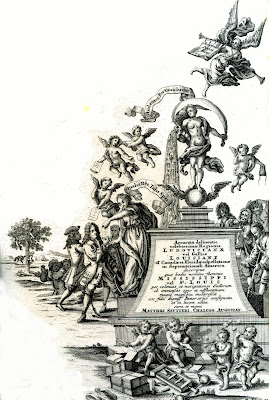 Sometime around the middle of the eighteenth century, Georg Matthew Seutter published a map of North America that is at least as fascinating for its elaborate title cartouche as for it cartographic depiction of the continent. Seutter based his rendering on an important French map by Guillaume Delisle first issued in 1718, the best map of North America in the early eighteenth century. Delisle, and Seutter after him, gave a fairly accurate picture of interior of the continent, demonstrating the vastness of the region and the immense river system draining into the Mississippi River.

Seutter presents the geographic information with careful engraving, enhanced with bold period color, but it is the wonderful drawings around the title in the lower right corner that draws one’s attention. This title cartouche is not only aesthetically delightful, but an understanding of its symbolism makes it as fascinating to the mind as it is appealing to the eye. This cartouche tells the story of the Mississippi Bubble.

The story of the Mississippi Bubble began with the financial crisis in France at the time of Louis XIV’s death in 1715. The Duke of Orleans, regent for five year old Louis XV, turned to his friend, the Scotsman John Law. Law had been forced to leave the British Isles after he killed a man in a duel, and he made a name for himself in Europe as a financial expert and successful gambler, attracting the Duke’s attention when he arrived in Paris the year of the old King’s death. The following year, Law established the Banque Generale, which helped to stabilize the situation in France, further enhancing Law’s reputation.

In 1718, Law established a speculative company called the Companie des Indes (or more commonly, the Mississippi Company), which was given a monopoly on trading rights with the French colonies, including the territory of Louisiana in North America (essentially, the Mississippi River drainage basin). Discoveries of lead ore—which was thought to indicate the nearby presence of gold—along the upper Mississippi, along with Law’s reputation, made stock in the Mississippi Company soar, rising from about 500 livres in May 1719 to almost 10,000 livres in early 1720. The speculative fever for this stock soon ran into the reality of the difficulty of extracting the supposed riches from the vast interior of North America—which was graphically represented on Seutter’s map—so in May 1720 the Mississippi Bubble burst.. The value of the stock plummeted, becoming essentially worthless by November, and Law was forced to flee the country.

Law’s scheme and its consequences are graphically illustrated in the fine title cartouche. At the top, Fame is shown blowing a trumpet calling forth those who seek gold. Just below is a statue of Plenty shown pouring jewels and coins in a stream from a cornucopia. This is a symbol for the riches that were expected to flow down the Mississippi River in a flood. A banner above states that “Fortune favors the bold.” 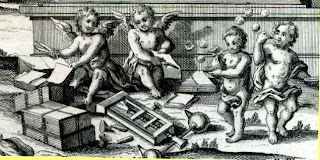 Luckily for the bold followers of gold, there was opportunity to acquire stock in the Mississippi Company. At the base of the pedestal upon which Plenty stands are two Italianate putti producing certificates using a wax seal printer. The stock is then being handed out by other putti and the goddess Commerce to delighted speculators. All seems wonderful until one notices that two of the cherubs along the bottom are blowing bubbles! 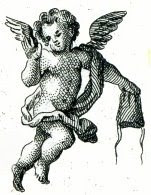 The purse, however, proved to be empty and the bubble did burst! Though the positive proclamations and promised riches of the cartouche initially draw the eye, when one looks closely, the consequences of the empty purse are present in all their surprise and horror.

[NB: If you click on the pictures above, you can see larger versions of these images.]
Posted by Chris Lane at 12:23 PM