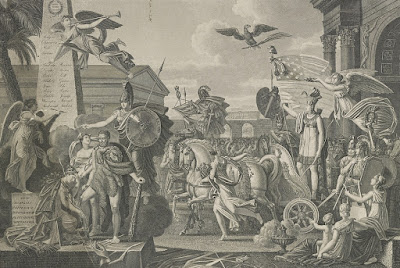 The War of 1812 officially ended on December 24, 1814, when the United States and Great Britain signed the Treaty of Ghent. However, the physical war had one more spasm of violence for word of the treaty did not reach North America until after one of the conflict’s biggest battles. In early 1814, Napoleon abdicated and was exiled to Elba, allowing the British to focus more on their war in North America. One of their major thrusts was to be campaign to capture New Orleans, thus gaining control of the Mississippi River. 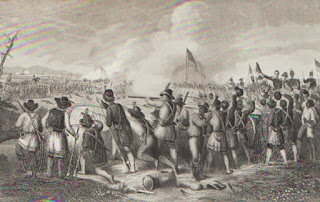 In December, 1814, a large naval and military force under Admiral Alexander Cochrane and General Edward Pakenham arrived in the Gulf of Mexico and proceeded to establish a base just south of New Orleans. On January 8, 1815, the British marched against New Orleans, but were repelled by Andrew Jackson and his motley force consisting of militiamen, slaves, Indians and pirates. This great victory, though it did not affect the final outcome of the war, did help build American morale and it catapulted Jackson to a fame which eventually led him to the White House. 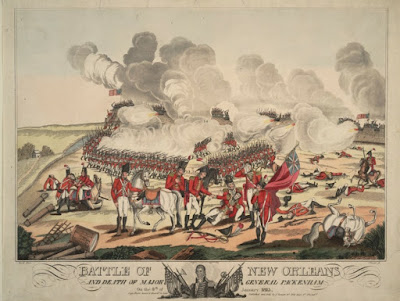 The victory caused a sensation around the country, so it is not surprising that an American publisher from Philadelphia, Joseph Yeager, would issue a colorful print of the battle to take advantage of the national enthusiasm over this victory. The print was drawn by William Edward West and engraved by Yeager himself. It was issued within a short period of time after the battle, when the public was eager to get its hands of any graphic image of the famous encounter. 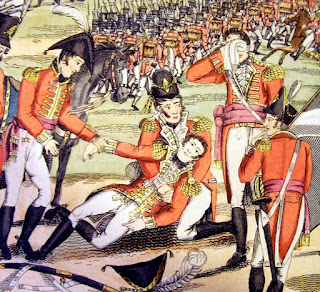 The print shows the battle from behind the British lines in order to highlight the death of General Pakenham, who is shown lying mortally wounded and surrounded by his staff. Among these was General Sir John Lambert who is showing crying into his handkerchief. The battle ranges in the background, with the British shown attacking the American ramparts, from which can be seen two proud American flags. 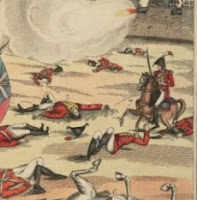 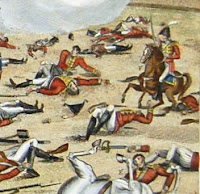 It is interesting that either because the plate was not selling that well or he felt it needed a bit more “oomph,” Yeager reworked the plate shortly after it was first issued to add extra figures, mostly British casualties. 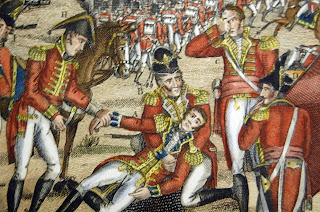 Of even more interest is the fact that for some reason Yeager again reworked the print, this time changing the figure of Lambert so that he is no longer weeping into a handkerchief, but is instead vaguely pointing to his left. Why this was done is not clear, but it is an interesting example of the “recycling” of prints.