For almost three decades I sold prints and maps in Philadelphia, and now for about half a year I have done the same in Denver. Any reader of this blog knows that my particular interest with this material lies in its historical nature and I have been lucky in that the histories of both places I have worked have been well represented in prints and maps.

Of course, the history of Philadelphia is over twice as long as that of Denver, but from its early days as a wintering ground for Native Americans, then as the focus of Pike’s Peak Gold Rush, through to its development as one of the most vibrant cities in the country, Denver has a history that is both complex and fascinating.

History is everywhere in Philadelphia, with centuries old buildings and historic sites of national import scattered thick on the ground. There are also some of the most important American institutions with an historical bent located in Philadelphia, such as the Library Company and Historical Society of Pennsylvania. The history of Denver is far less obvious, but it is still there for those with an interest, and in the Historical Society of Colorado and the Denver Public Library’s Western Collection, Denver holds its own with institutions of historical import.

In my time here, I have found that while the specifics of their stories are very different indeed, Philadelphia and Denver are similar in that both of their histories are rich and are an important part of the fabric of the cities. (This is, of course, a good thing as we have opened a shop in Denver!) One thing I have noticed, however, is that the two populations have a very different approach to the views and maps of their locations.

In my opinion, Philadelphia has the most interesting and important body of antique views of any American city. From the earliest printed views in the mid-eighteenth century, leading to William Birch’s landmark City of Philadelphia, through the wonderful series of views by Cephas Childs and J.C. Wild, continuing past the commercial lithographs of post-Civil War period to an extensive body of images of the Centennial, the views of Philadelphia are rightly known as comprising a unique and important body of American iconography.

Philadelphians are quite aware of this fabulous graphic wealth. There are great repositories of Philadelphia views at its many cultural institutions, exhibits on the topic are regularly on display, and there is an impressive body of reference works on Philadelphia views, from Martin Snyder’s City of Independence to the forthcoming Philadelphia on Stone from the Library Company. Furthermore, there is a strong group of knowledgeable collectors and scholars with an interest in this topic. 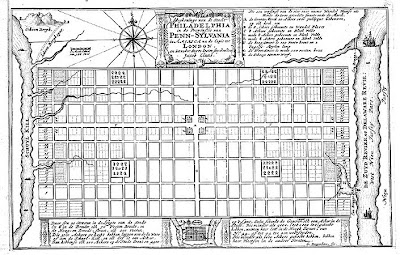 Somewhat in contrast, while there is a significant body of early maps of Philadelphia and eastern Pennsylvania, there is not nearly the interest in regional maps as there is in views. There are certainly less collectors of Philadelphia and Pennsylvania maps than there are of views of the same area and there have been few exhibitions and no significant reference books on the subject. Sure there are great maps and some serious collectors, but these pale in comparison to the comparable print collections and collectors.

I think there are a number of reasons for this. In terms of Philadelphia maps, there are far fewer early maps of note than there are important early views. Also, most of the early maps of Philadelphia show only Center City, making them of less interest to the large population that lives outside this small locale. And, as I have written about elsewhere, maps of Pennsylvania are notoriously unloved.

What has struck me since my move, is that the attitude of locals here towards views and maps of Denver and Colorado is almost the inverse of that of those in the Delaware Valley toward views and maps of Philadelphia and Pennsylvania. Here, it is maps which generate the most enthusiasm, with views surprisingly under-appreciated.

There is an notably large contingent in the Denver area who are quite keen on maps of the region. The Rocky Mountain Map Society is one of the most active in the country, with many of its members impressively knowledgeable on various western map related topics. And this applies to those who wander into our shop; whereas in Philadelphia we are often answering queries about views, here it is usually maps and more maps! 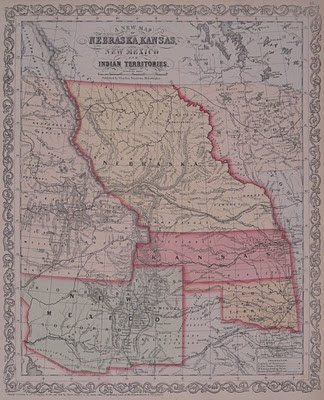 Probably a lot of this is explained by the fact that the cartographic history of Colorado and Rocky Mountains is really more interesting and varied than that of eastern Pennsylvania. Until the early nineteenth century, there was essentially little or nothing shown on maps of this region, but then a number of expeditions were sent out to the West, leading to the gradual mapping of Colorado and the Rockies. The post-Civil War railroad surveys and other expeditions slowly filled in the topography of the area, so the maps from different years showed interesting progress. And the political development of the trans-Mississippi West went through a whole series of configurations from 1848 to the end of the century, each new map again providing an interesting contrast to those before.

Thus the interest in maps out here is no surprise. As I wrote in an earlier blog, I am having a wonderful time learning about the exploration and settlement of the region, studying how it is depicted on the hundreds of different maps in the second half of the nineteenth century. What did surprise me, on the other hand, is how little interest or knowledge there is about the early printed views of Denver and Colorado.

As I said, in Philadelphia there is an immense amount of interest in and knowledge of the printed views of the area, whereas in Denver there seems to be relatively little of either. Now I do have to admit that this does not seem to apply to the photography of the West, which is a fascinating subject about which I know rather little. But when you are talking about engravings or lithographs of Denver and Colorado, it just doesn’t seem to be something about which people out here are particularly excited. 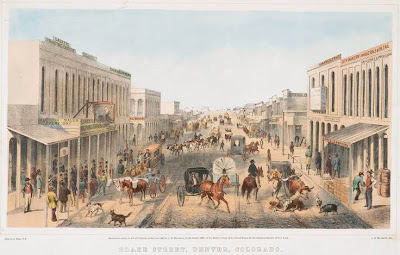 That isn’t to say that there isn’t some interest in some views of the area. A.E. Mathews’ Pencil Sketches of Colorado are well known and desirable, and many of the map collectors in the area love bird’s eye views, but I find surprising apathy with reference to the more mundane, but still wonderful views of the area from the 1860s to 1900.

Just to give one example, I have talked to a lot of people out here and have yet to find anyone who knows what the first printed view of Denver is. I find that pretty amazing. Denver was only founded in 1858 and there are only so many prints done of the place before, say, 1870, so I would have thought people would know about this, and care! 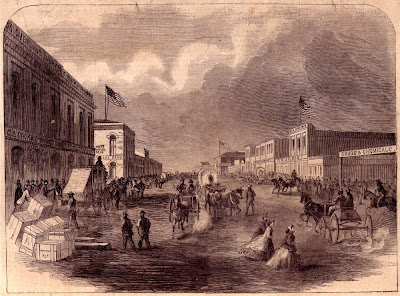 Some of the lack of interest may be that there are not that many early views of Denver and Colorado, and other than Mathew’s set, most of those are wood engravings from illustrated newspapers. As I have written earlier in this blog, I think illustrated newspaper prints are historically and visually wonderful graphic images and so to me these early views of Denver are terrific, but I guess they haven’t really inspired enthusiasm in the general public.

I am hoping to change that by putting together as much of a history on the topic as possible. There is a recently published book, Illustrations of Historic Colorado, which does include an interesting collection of printed images of the state (most from illustrated newspapers), but I think this topic needs to be further explored and publicized. I plan to do some of this in this blog, but eventually I hope to get something more substantial published. And, by the way, I think I know what the first printed view of Denver is, a topic I will discuss in a forthcoming blog…
Posted by Chris Lane at 3:56 PM