A thematic map is a type of map which is designed to show a particular theme, other than geographic data, expressed onto a geographic base. Themes can include social, cultural, political, economic, agricultural, climatic, historical, or pretty much any other theme which has a presence in the physical world. Thematic maps differ from regular maps in that for the latter, the geographic information is the end in itself whereas for the former, it provides the context for the thematic data.

What thematic maps do is to give the viewer a unique way to look at quantitative information, which can provide insight not obtainable directly from the raw data itself. It is the nexus of the data and the geographic base which presents new patterns, which in turn can lead to a new understanding of the data and, in some case, important discoveries.

Perhaps the earliest extant thematic map is the Turin Papyrus, an Egyptian map from about 1160 BC, which was prepared for Ramesses IV’s expedition to Wadi Hammamat to obtain sandstone for his construction projects. The map shows the wadi with the location of gold deposits indicated, as well as the distribution of different rocks and gravels (by use of different colors and symbols), making this the first geological map.

Another early thematic map is the Peutinger table, a map based on a 4th-century Roman map. A 13th-century copy of the original map was discovered at the end of the fifteenth century and ended up with Konrad Peutinger (thus its name). The map shows Europe and parts of Asia and Africa, but the map is designed to show the roads and travel routes of the Roman legions, with each day’s march marked on the roads. It is very elongated, as the map is built around the Roman road system network which primarily ran east-west. 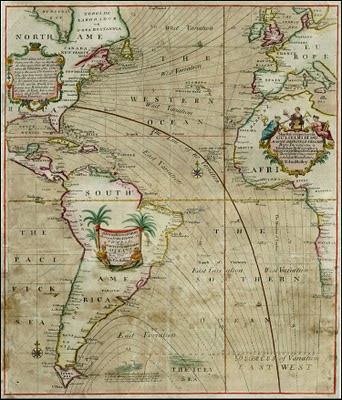 One of the most important figures in thematic mapping was British astronomer Edmond Halley, who published the first meteorological chart in 1686 and then a map of magnetic variation in 1701. 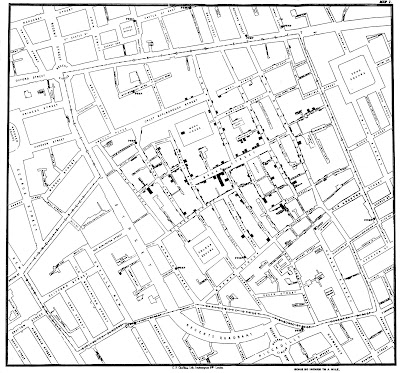 The most famous early example of thematic mapping was John Snow’s map of the incidents of cholera in London in 1854. Cholera was a serious and not-understood health issue in the nineteenth century. Snow decided to plot the incidents of cholera onto a map of the London neighborhood just north of Piccadilly Circus, upon which was also marked the water pump locations. The pattern which emerged clearly showed that the cholera incidents centered around a pump on Broad Street, indicating that this was the source of the epidemic. The pump was put out of commission and new cholera cases ceased. This was the first real indication that cholera was spread by tainted water and not through some air-borne medium.

Thematic maps use various techniques, such as the marks used by Snow, or applying different colors to represent different densities of the theme in question (choropleth maps), or the use of proportional symbols on a map, or isarithmic or contour maps, where a fixed data point of, say, precipitation or temperature, is mapped in a continuous line on the map (reminds me of what a map of Alcatraz by an ex-prisoner is called, a Con Tour map…).

While few thematic maps have had quite the impact of Dr. Snow’s, there have been many instances of important and fascinating thematic maps over the years. A nice book on the topic is Arthur H. Robinson’s 1982 Early Thematic Mapping in the History of Cartography.

The subject of this blog was inspired by a fascinating talk on thematic maps by Dr. Susan Schulten of the University of Denver. Her talk, “Disease Mapping and the Advent of Meteorology in America,” was presented as part of the Arts in Medicine program at the University of Colorado medical school. Susan looked at how the attempt to understand the nineteenth century epidemics of cholera and yellow fever involved the use of maps (the Snow map, obviously, featuring prominently), and how the success of thematic mapping in this arena extended its use to other areas of science, such as meteorology.

Susan (another example of the terrific network of map scholars who are members of the Rocky Mountain Map Society) is nearing completion of a book on thematic mapping. This is what she says about her project.... “The book I'm writing is a history of thematic mapping in the nineteenth century, looking at maps of the present but also the rising interest in old maps and maps of the past at that time. I'm closing in on a draft of the entire manuscript…. It will come out with Chicago, and will be accompanied by a website where high resolution versions of the maps will be available for close inspection.” I am looking forward to its publication and I’ll make sure to announce it in this blog when it makes its appearance.
Posted by Chris Lane at 5:08 PM