Our picture of Santa Claus 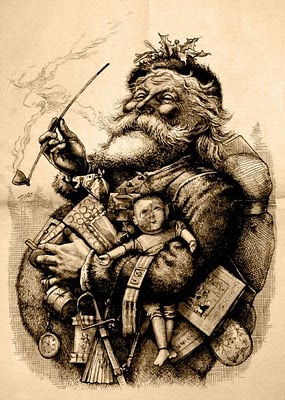 I have written often on how one of the things I find interesting about antique prints is the impact that they have had on our history and our present. Today's blog is about a series of prints which have had a great impact on our world, for they created an image which is ubiquitous in today's world: our picture of Santa Claus.

In an earlier blog, I talked about the illustrated newspapers of the nineteenth century. The most successful American newspaper of the period was Harper's Weekly, published in New York City between 1857 and 1916. This newspaper used a number of important illustrators for its wonderful wood engravings, including A.B. Frost, Winslow Homer, Granville Perkins, and Thomas Nast. 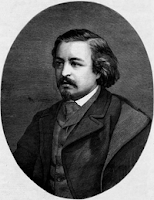 Nast was born in 1840 and emigrated to the United States in 1846 with his family from Bavaria. His father, a musician, had enrolled the artistically precocious child in an art school by age 12. Three years later he was forced to leave his training to help support the family, fortunately gaining work as an illustrator at Frank Leslie’s Weekly. Five years later Nast had traveled abroad to cover the Heenan-Sayers fight, later joining Garibaldi’s forces in Italy as a war correspondent. He had been employed by the New York Illustrated News for these assignments, but by early 1862 he had become a war correspondent again, this time for Harper’s Weekly. His patriotic themes created such attention that President Lincoln cited Nast as his “best recruiting sergeant,” and his cartoons in Harper's had a significant impact on political events of the day (subject for a future blog).

More than a mere cartoonist or illustrator, Nast was an innovator of images, popularizing or instituting many now familiar subjects such as the Republican elephant, the Democratic donkey, John Bull, Uncle Sam, and Columbia. Perhaps his most lasting creation was the image of Santa Claus. Santa Claus has his roots deep in history, with such predecessors as St. Nickolas, Sinterklass, and Father Christmas. The name "Santa Claus" first appeared in the late eighteenth century, but Santa and these other related Christmas figures continued to change their name and character as time passed. He was depicted as a figure in a fur-lined robe by John Leech in 1843 (image at left) or often in a bishop's robe, the images of this figure tended to show an older, bearded and friendly gentleman with either a garland or fur-lined hat on his head.

The modern conception of Santa Claus took on much of its final character from Clement Clarke Moore's poem "A Visit from St. Nicholas" (usually referred to as 'The Night Before Christmas'), which first appeared in the pages of the Sentinel, published on December 23, 1823. Santa was described as a "jolly old elf," who drove a sleigh that landed on people's roofs, from whence Santa would descend the chimney to deliver toys to boys and girls around the world. 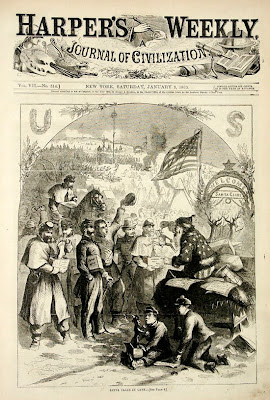 The first image that Thomas Nast drew of Santa Claus was on the cover page of Harper's Weekly for January 3, 1863. Santa is a bearded fellow in a star-spangled coat and fur cap handing out presents (including a puppet figure of Jefferson Davis) to Union Soldiers. This image does not show the influences of Moore's poem, but within a year our now familiar "jolly old elf" began to appear. 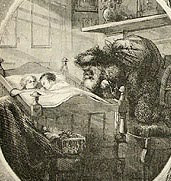 In the December 26, 1863 issue of Harper's, Nast presented another Civil War themed Christmas image, centered by a vignette of a soldier home on furlough. In a panel to the left is the first Nast picture of Santa Claus that really begins to look like today's figure. This image is clearly influenced by "A Visit from St. Nicholas," with Santa, having entered the home one assumes through the chimney, gazing down at the sleeping children, a large bag of toys on his back. 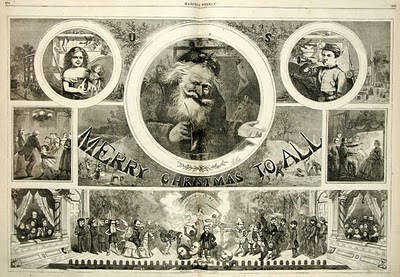 Two years later, in a print entitled "Merry Christmas To All," Nast's figure makes his first front & center appearance, in a nice portrait of Santa standing in front of the chimney, from which hangs a stocking. 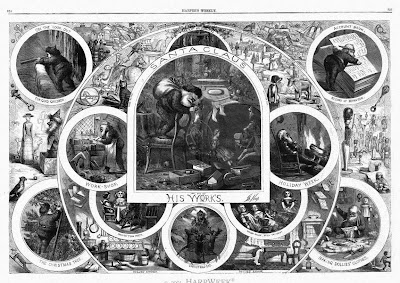 A year later, in a print entitled “Santa Claus and his works," Santa took over the entire image. Here are a series of delightful vignettes clearly based on Moore's poem. Santa is indeed a "jolly old elf" and one of the vignettes shows this "little old driver" in his "miniature" sleigh. His small size (which follows the poem) and other aspects of these pictures aren't exactly like today's images, but they certainly are familiar and this print shows how influential Nast's figure was becoming in the minds of American readers.

If we just ahead five years, to the December 30, 1871 print “Santa Claus’s Mail,” (illustrated above left) we can see today's picture emerge more strongly. Similarly with “Christmas-Eve–Santa Claus Waiting For The Children To Get To Sleep” from January 3, 1874 (illustrated above right). 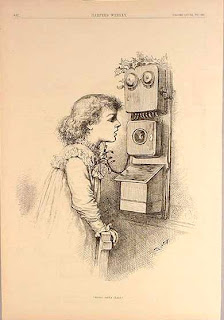 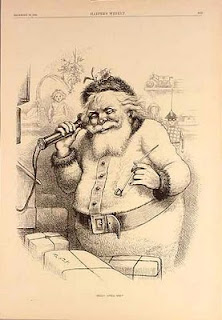 In the following years, up the the mid-1880s, Nast continued to provide delightful images of Santa, slowly changing into the paradigm image was have today. Whether Santa being hugged by a mob of children or chatting on the phone with a young girl, this is a Santa we instantly recognize. The most iconic image is probably the January 1, 1881 print “Merry Old Santa Claus” (illustrated at the top of the blog), but all the images are familiar and bring a smile to our faces. 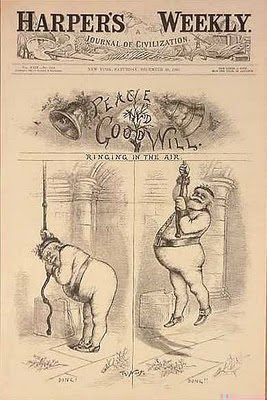 "Happy Christmas to all, and to all a good-night"
Posted by Chris Lane at 8:00 AM