My Dad died earlier today and I am at a bit of a loss over how to mourn for him. Our world today is so filled with demands on our time and thoughts. Working eight hours a day, being involved with various community activities, keeping up with our “on-line” life (including writing blogs…), are all things constantly calling for our attention. While everyone is understanding at a time like this, it is not part of my daily life simply to be in the present time in order to try to deal with the passing of my father. 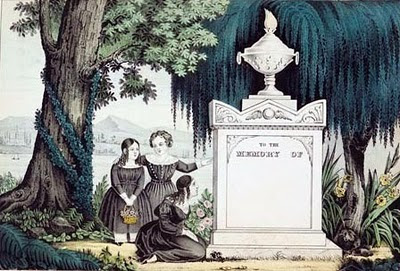 In earlier times, death was much more part of people’s everyday life. One manifestation of this was the common use of mourning pictures. Before the nineteenth century, there were memorial engravings, mezzotints or embroideries which were in the homes of the well off, but when modern printmaking processes, such as lithography, made prints more affordable and available, mourning prints became something that appeared in the homes of people of all classes and backgrounds.

Death was particularly prominent in the life of those in the “Victorian era.” Elaborate funerals and funeral processions were a common sight and death was an everyday topic of discussion. Death of family members, through childhood disease, accidents or war, was something everyone experienced far too often. In the nineteenth century, memorial mementos—lockets, hair jewelry and the like—became fashionable and ubiquitous. Among these were paper memorials, such as funeral photographs and funeral cards, and these were printed in large numbers. Memorial prints were also common. 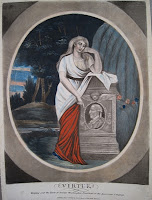 In America, up to the end of the eighteenth century, memorial prints were mostly imported from Europe, but the death of George Washington inspired the production of American memorial prints. As lithographic printmaking firms began to appear around the country, producing “popular prints” for the general public, so too did lithographic mourning prints come to hang in more and more homes. The Civil War, with its huge number of deaths, spurred the publication of even more of these prints. One can find prints of this sort by Currier & Ives, the Kelloggs, Pendleton and many other American firms. 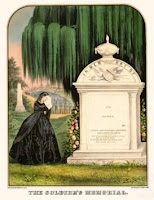 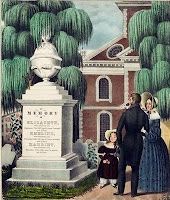 Typically, these prints would include a funerary urn on a plinth with weeping figures (wife, family, children, etc.) standing to the side. These variation in the mourners would allow a print to be appropriate for any family situation. The plinths often left a blank space below words such as “In Memory Of” for the name of the deceased to be written in. Other common elements of these prints include weeping willows, churches, and even sailboats on a river to represent the “soul’s voyage to heaven.”

These mourning lithographs tend to be some of the less expensive prints in today’s market. In today’s world death is not nearly as marketable as it once was! It is not as much a part of our lives and not something we really tend to want to “hang on the wall.” Still, the mourning prints are fascinating, for they can tell us—through architectural features, costume, and so forth—much about the age when they were printed, and they are really very touching in their sentiment. Still, they are definitely not good sellers on the market. 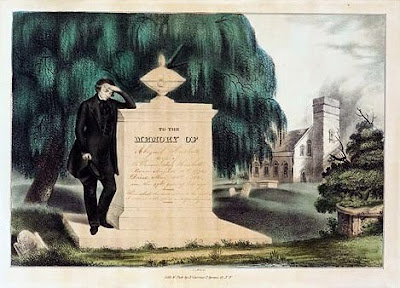 Would such a print help me? I certainly love to look at old prints and think about why they were used, what they tell us about the age in which they were produced, and to simply enjoy the art of our past. Maybe if I get a blank memorial print and put my dad’s name on it, it will allow me to slow down and remember him in a way I seem to be having trouble doing on my own. I always argue that antique prints give us a window on our past and I suppose it doesn’t necessarily have to be the distant past. I think I will give it a try.
Posted by Chris Lane at 3:37 PM