A non-existent lake in the American southeast

Returning to the theme of cartographic myths, today I'll look at a non-existent lake which appeared on maps of the American southeast over many years beginning in the seventeenth century...

In 1591, Jacques Le Moyne de Morgues' map of "Florida" was published by Theodore De Bry. This map was based on information derived from early French attempts to found a colony in northern Florida. Le Moyne depicted several lakes in Florida, including one with an island in it ("Lacus & Insula Sarrope") which probably represented Lake Okeechobee, and another, larger fresh water lake ("Lacus aquae dulce") to the north, probably representing Lake George. About this latter lake, Le Moyne said that it was so large that it was impossible to see one side from the other ("Adeo magnus est hic lacus ut ex una ripa conspici altera non possit"). This lake is shown arising in the River May, which represents the St. Johns River, that flows to the northeast before taking a bend to flow southeast into the Atlantic, taking on an inverted-V shape. 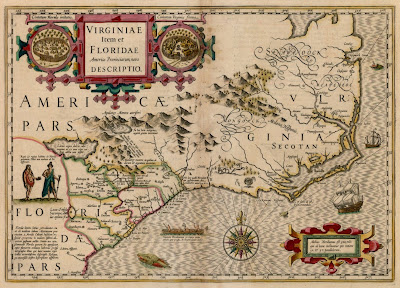 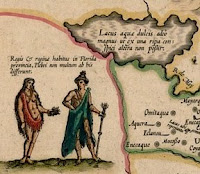 In 1606, Dutch cartographer Jodocus Hondius drew a map of the American southeast, "Virginae Item et Floridae Americae Provinciarum nova Descriptio," that combined Le Moyne's map with John White's 1590 map of Virginia, also published by De Bry. Hondius made a number of mistakes in this process, including joining the maps too closely together which resulted in his leaving out a considerable part of the Carolina coastline. However, the most long-lasting mistake came from Hondius' treatment of Le Moyne's River May and the large lake from which it flows. Hondius straightened out this river, thus moving the representation of Lake George up into the Appalachian Mountains of Georgia or western South Carolina!

It is not clear why Hondius did this, though he was probably influenced by the representation of earlier cartographers showing a Sola or Seco River flowing from the mountains in a southeasterly direction in much the same area. This Sola River was a bit north of the River May, and Hondius and others did show River May as too far north of its true position. Because of the publishing clout of Hondius and the Mercator-Hondius Atlas in which the map appeared, it was Hondius' map that subsequent cartographers followed rather than its source maps by Le Moyne and White. Thus it was that lake appeared in an seriously wrong location on maps by almost all cartographers in the following years. The lake as shown by Hondius and in the subsequent maps did not exist.

In 1669-70, John Lederer, from Virginia, made three trips into the interior of the American southeast. In 1672, Lederer issued a report of his journeys entitled The Discoveries of John Lederer. In this report Lederer claimed to have gone to Hondius' lake in the uplands of the Carolinas, despite its non-existence! Lederer, described the lake, which he called "Ushery," thus:

"The water of Ushery-lake seemed to my taste a little brackish, which I rather impute to some Mineral-waters which flow into it, then to any saltness it can take from the Sea, which we may reasonably suppose is a great way from it.... I judged it to be about ten leagues broad: for were not the other shore very high, it could not be discerned from Ushery. How far this Lake tends Westerly, or where it ends, I could neither learn or guess." 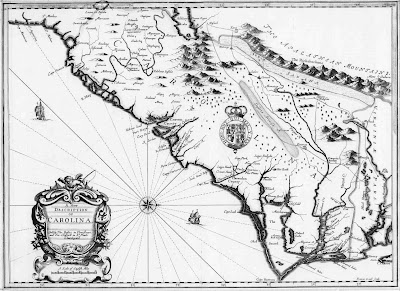 Why Lederer made this claim, when he could not have visited a non-existent lake, is something of a mystery, though it appears he may have lied in order to help enhance the significance of his travels. In 1676, British cartographer John Speed issued a map of the Carolinas (note that it is oriented to the west) the text of which contained a synopsis of Lederer's work. In the map Speed showed Hondius' lake quite prominently (he named it "Ashley Lake"). Speed's inclusion of the lake on his map and the publication of Lederer's information had much to do with the spread of the mythical geography. The lake was a geographic feature which had been "on the map" for seventy years and it was now reconfirmed by first hand experience. What more could one want in order to prove that this lake was really there! 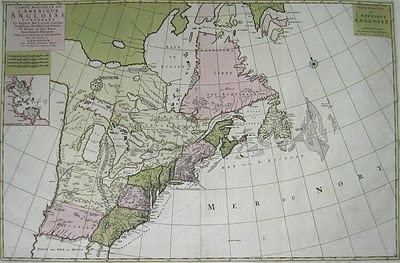 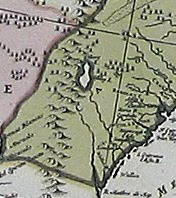 With this textural and graphic support, this lake, which came to be called Lake Apalachy, continued to appear for many years afterwards. Even such scientific cartographers as Nicolas Sanson and Guillaume Delisle showed the lake in the American southeast, though Delisle did get rid of the lake by his 1718 map of North America. Other maps of North America well into the eighteenth century included this mythical lake that thus had a life span of about a century and a half.
Posted by Chris Lane at 8:00 AM