Sidney Z. Lucas was an art entrepreneur who was responsible for a large number of prints which generate many questions to our shop as well as on various antique forums on the internet. Lucas' prints are those either issued by “Camilla Lucas” or the “Paris Etching Society.” His prints can also be identified by a circular or triangular symbol with the initials “SZL.” Some of the details are uncertain, but the general story of Lucas and his prints is as follows. [Addition Jan. 2010: Lucille Lucas, daughter of Sidney Lucas, has left a comment to this blog correcting some apparent errors in this blog and adding some extra information. Please make sure to read this comment...] 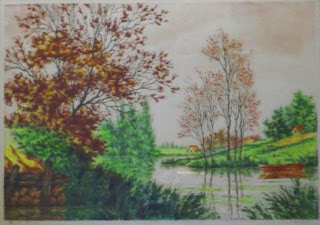 Beginning in the 1920s and lasting until the 1960s, Sidney Lucas owed The Old Print Center in New York and ran a gallery named the Camilla Lucas Gallery, named after his mother. He was in the business of both wholesale art publishing and retail art sales, dealing with modern and contemporary prints as well as reproductions of prints.

As another venture, Lucas formed the Paris Etching Society, where he traveled to Europe and commissioned prints by primarily French and Flemish artists. These were all original, hand-colored aquatints or etchings and they were usually signed, and sometimes titled, in pencil by the artists. Supposedly the runs for these prints were between 350 and 500. These prints can be identified either by a “Paris Etching Society” imprint or the initials “SZL” inside a triangle or circle. 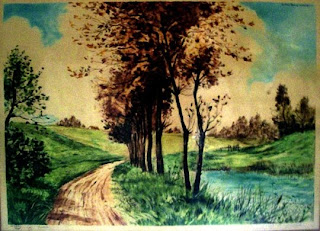 These prints were sold out of Lucas’ gallery in New York, as well as galleries around the country. Most of the artists who produced prints for Lucas are of no particular note and indeed it is often impossible to read the signatures, or even if they are legible, to find out much about the artists. The prints typically have a “soft” feel to them and are colored with pastel shades. The fact that the artists are not of the first rank, that the prints were run off in fairly large runs, and that there are lots and lots of these prints floating around means that they have only “decorative” value. They are attractive, original prints, but generally not collector prints.
Posted by Chris Lane at 10:43 AM