A couple of weeks ago, Victoria wrote a great post about traditions of allegory in Western art. As I’ve been researching an image in our inventory of George Washington and Abraham Lincoln, I’ve been thinking a lot about the particularly American set of symbols and icons that appear in popular prints. Puzzling out how those symbols have been portrayed in the past and how they came to be is a great way to unravel a little bit of American history. 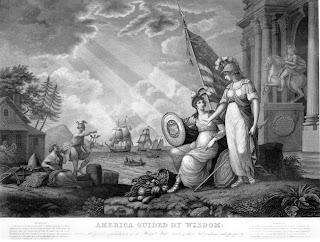 From the beginning, Thomas Jefferson and other framers of our early federal documents aligned the new nation with classic republics, borrowing even classical architectural styles to express ideas of life, liberty, and the pursuit of happiness (visit Jefferson’s University of Virginia for the most famous examples). Early purveyors of national iconography did the same, piling classical references one upon the other. One Philadelphia artist, John James Barralet, used classically draped goddesses in Greek klismos-style chairs to symbolize the bounty and freedom of the new republic, where Hermes (Mercury) leads merchants and immigrants to the throne of Liberty. Advised by Athena (Minerva), goddess of wisdom, she sits in welcome at a pristine, colonnaded temple of justice and self-determination and receives the new arrivals with a cornucopia of produce, displaying the judicial scales which would ensure their free and equal pursuit of happiness. Greek and Roman characters, elements, and symbols were adopted to communicate new American ideals and characteristics.

As the nineteenth century progressed, Protestant Christianity became the dominant framework for American narrative of origin, replacing characters of Greek mythology with characters of the Old Testament. Bible passages were applied liberally to public speeches, and public schools were well-supplied with copies of Protestant Scripture. Popular culture and religious culture mingled in the celebrity of people like author Harriet Beecher Stowe, who wrote the wildly popular Uncle Tom’s Cabin and whose family tree was famously populated with Christian ministers and moralists. As historians like Nathan Hatch and Mark Noll have documented (more eloquently than I can in the scope of this post), popular and political culture became infused with Protestant statements of morality. 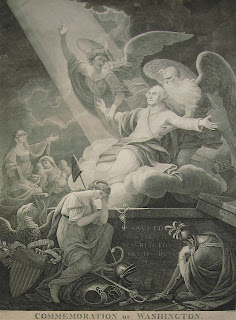 To make matters more complex for those interested in the progression of American visual culture (including print enthusiasts like us), popular Protestantism did not simply replace the Early Republic’s allegorical vocabulary of Classical imagery; rather, it layered atop the Classical stratum a drape of Protestant canonry. These layers are perhaps most evident in the nearly sacred iconography of George Washington. In a nation whose dominant, sometimes virulently anti-Catholic religion brooked no saints and no idols, Washington became like a federal deity. Cast as the father of his nation, he took on a nearly Abrahamic role in young nation’s mythology. To Protestant patriots, Washington was the one with whom God established the nation-building covenant: that his descendants would be greater in number than the stars. Scenes of allegory took on biblical casts: in a print published at his passing, George Washington, crowned with a Classical laurel wreath, journeys to heaven carried by angels, familiar symbols from Christian imagery. As though he were a chosen one borne to his eternal reward, Washington lifts his eyes toward heaven, spreading his hands to receive blessing. 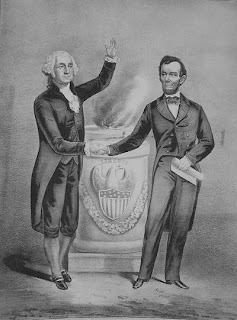 Fast forward a few generations, and up comes came Abraham Lincoln: the mingled embodiment of both the Protestant work ethic and the classic American promise of opportunity. Republican campaigners literally sang his praises, lauding his adolescent wood-chopping abilities and humility of character. Following his assassination, Lincoln was elevated to a Messianic role: if Washington was the nation’s father, Lincoln was seen as its savior, and was termed exactly that by Currier and Ives in the subtitle of a print they published of the two presidents (Conningham: 6510). 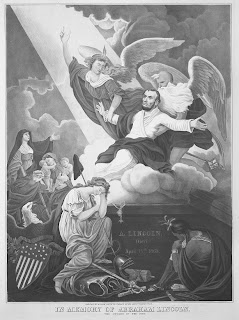 After Lincoln passed, enterprising print pirates used the same image as was used to memorialize Washington decades earlier. Engraving Lincoln’s head where Washington’s had been, they ascribed to the martyred president the same divine approval as had been ascribed to the first president. Lincoln was the bearer of a sort of new covenant – the one whose Union-focused perseverance would redeem the wayward nation. He was the martyr, a Messiah-like figure whose death proved his virtue.

In 1865, Stephen J. Ferris participated in this trend, producing an image that was published by Philadelphian J.A. Arthur. Educated at the Pennsylvania Academy of the Fine Arts and Paris, Ferris was a highly-trained and influential Philadelphia artist whose paintings and prints were exhibited throughout the and Europe. His image demonstrates that even fine artists took part in the elevation of Lincoln to American icon through the pairing of the sixteenth president with the first. In a shaft of heavenly light, Washington lifts Lincoln through the clouds to his eternal rest, where a crown of laurels awaits him and confirms his achievements as the Preserver of the Union. Like many images pairing the two, this was so popular as to be reproduced in cartes-de-visite form and copied by at least one amateur artist working in charcoal (see images below). 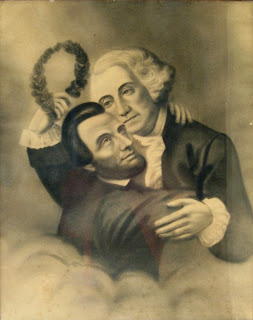 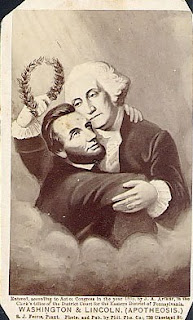 Harold Holzer is the historian who has most fully developed these ideas in his excellent article, “ ‘Columbia’s Noblest Sons’: Washington and Lincoln in Popular Prints (Journal of the Abraham Lincoln Association 15.1 (1994): 47 pars. 19 Aug. 2009
Posted by Chris Lane at 8:00 AM