In previous blogs I have described the three major types of printmaking processes: relief, intaglio and planographic. Today I will talk about an uncommon process, “nature printing.” 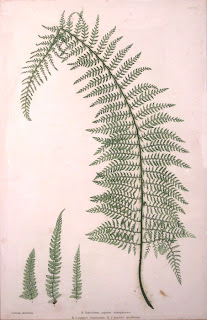 Nature printing is not a single process, but includes any printmaking procedure where actual natural specimens—such as a plant or insect— are used to make prints. The earliest known attempt at nature printing was by Leonardo da Vinci who printed images of plants by inking the plants and then pressing them by hand onto the paper. This process was used infrequently into the eighteenth century, but proved generally unsatisfactory because of the problems of getting uniform impressions and wear on the specimens, which limited the number of prints possible.

In the nineteenth century a new approach was tried, where the specimen was not used directly to make the print, but instead it was used to make a printing plate of wood or metal, from which the print was then made. The most practical process was developed in 1853 by Alois Auer in Vienna. It involved laying the item to be illustrated on top of a plate of soft lead. The specimen was then covered with a hard steel plate, and this sandwich was run through an intaglio printing press. The pressure forced the image of the specimen into the soft lead. The ink could then be applied to the lead plate and prints made from this. It was also possible to transfer the image to a copper plate by electrotyping and a reverse plate made from that for printing. 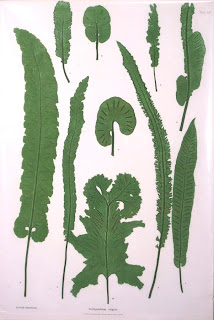 This process was most successfully used by Henry Bradbury, who used it to produce large nature prints for Ferns of Great Britain & Ireland in 1855 and The Nature-printed British Sea-weeds in 1859-60. These images are not only very decorative, but each print precisely and delicately traces the image of the plants, capturing the detail of nature itself almost “first hand.” Another interesting example of nature printing was Sherman F. Denton’s use in 1900 of actual butterfly wings to make the prints for As Nature Shows Them: Moths and Butterflies of the United States. Denton created the prints by pressing wings into the pages. He recorded that he had to collect over 50,000 insects in order to produce his work!

It is interesting that towards the end of the twentieth century there was a resurgence in interest in nature printing, resulting in the formation of the Nature Printing Society in 1976. You can read more about this society and nature printing on their web site.
Posted by Chris Lane at 8:00 AM

Labels: Interesting prints, Print Processes, What is a print