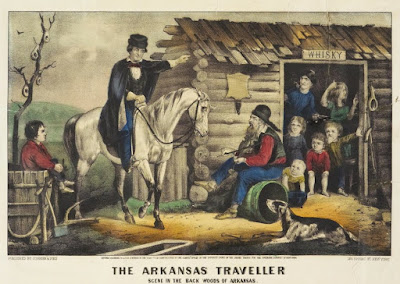 The story of the “Arkansas Traveler” naturally has its roots in Arkansas, but over time it has come to be a universal American folk tale. The origin of this tale is in a story recounted by Colonel Sanford Faulkner, an Arkansas farmer and politician. According to his telling, Faulkner got lost somewhere in the Ozarks in 1840 while on a political canvasing trip. Searching for directions, Faulkner came across a ramshackle squatter’s cabin with its occupant sitting outside playing his fiddle.

Faulkner's queries to the squatter were met with humorous but unhelpful replies until Faulkner showed he was able to play the second “turn” of the tune the squatter had been playing. This thawed the squatter’s attitude, and he subsequently offered welcome hospitality and directions to Faulkner.

The tune supposedly played in this perhaps apocryphal episode probably had older roots in American folk music, but it was first published in 1847, and it went on to become a standard part of the American folk repertoire. The story later became part of a popular sketch performed regularly on the vaudeville circuit, featuring a lost city slicker as the brunt of evasive banter by a cagey country fiddler. 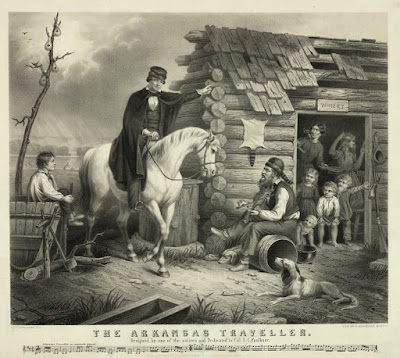 In the mid-1850s, Arkansas artist Edward Payson Washbourne made a painting of the meeting between the traveler and fiddler, which in 1859 was turned into a lithograph by J.H. Bufford. That print is very rare, but a number of years later, Currier & Ives issued their own version of this scene and it is that print which has come to be the iconic image of the Arkansas Traveler.

One of the things I enjoy most about the print/map business is that I share a love for the items I deal in with many others. Often, those fellow enthusiasts share their enjoyment and knowledge with me. This recently happened where a fine banjo player, Don Borchelt, sent me this link to a delightful rendition of the tune, as well as a fun version of the dialogue between the traveler and fiddler, using—-naturally—-the Currier & Ives print as illustration.