In November, on election day, just a year after one of the most traumatic election days of recent history, I spent a lot of time thinking about the drama and foibles of the election process. This is, of course, nothing new and there have been many prints made over time on this topic. This blog will consider two such prints.

One of the two prints is the second in a series of four plates from a series of images drawn by William Hogarth and inspired by a notorious election for the Parliamentary seat from Oxfordshire in 1754. That election was famous for its corruption and inspired by this Hogarth produced his series, supposed to take place in a fictional town of ‘Guzzledown,” as a lampoon of not only that specific election, but elections in general. The series shows the chaos and corruption surrounding electioneering in eighteenth century England, but with universal relevance to any election. 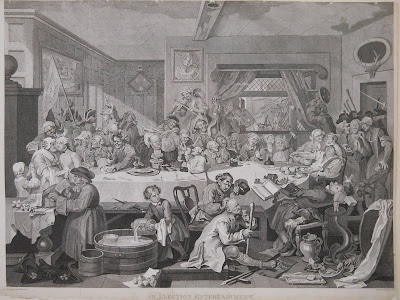 The first plate in the series, entitled “Election Entertainment,” is a parody of Leonardo's Last Supper, showing a raucous scene of a dinner put on by the Whigs to woo voters with all sorts of debauchery. The candidates are shown at left while various party figures and voters cavort in drunken revelry. Outside the window, a mob of Tories is rioting, one member of which hurled a brick in the window which hit the Election Agent. 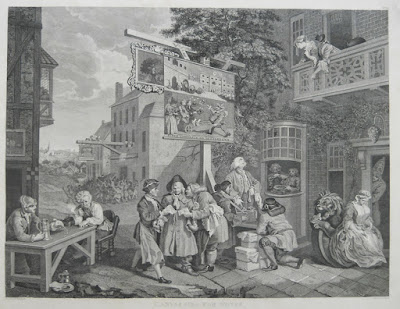 The print we will look at more closely is the second in the series, entitled “Canvassing for Votes.” Here the scene is outside “The Royal Oak,” the headquarters of the Tory candidate. The sign for the inn has been partly covered by another sign ridiculing the Whig candidate by showing him as Punch distributing coins to voters. Ironically, the Tory candidate is shown buying trinkets to use to buy the votes of two women on the balcony above. Meanwhile, an undecided voter is shown being cajoled by representatives of the two parties, each of whom is placing coins in the voter’s open palms. Two drunks are shown at left, while in the background a mob is attacking the Whig headquarters located in “The Crown.” 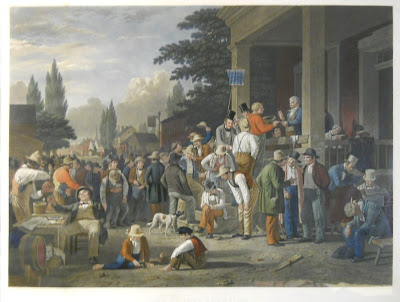 A century after the Oxfordshire election, in 1854, George Caleb Bingham’s engraving of “The County Election” was published. One of the best American painters and printmakers of the nineteenth century, Bingham captured the election experience with as capable a brush as Hogarth’s.

The scenes are remarkably similar in viewpoint and composition, though now showing a scene that is a hundred years later and in America. Bingham drew the scene based on his home town of Arrow Rock, Missouri, and the artist can be seen sitting on the step in the middle of the image. The print, similarly to Hogarth’s, shows a raucous election scene in a small town.

The image includes candidates caucusing right on the steps of the Court House, an already tipsy voter accepting even more cider so that he’ll vote for a particular candidate, and a slumped drunk being carried to the poll to “cast his vote.” All this is similar in feel to Hogarth's print, but Bingham seems to have been of more of a mixed mind about the validity of elections, for other votes are shown seriously arguing and a wide variety of figures from all walks of life (though, of course, no women nor blacks) seems to cast a positive spin on the American election system.

Democracy is clearly flawed, as Hogarth and Bingham show a century apart, and it sometimes produces winners who are not worthy of their positions, but it is still the best system going. We need to remember the problems illustrated by Hogarth and Bingham, but it is our open and honest participation in the process which will overall produce a better society.