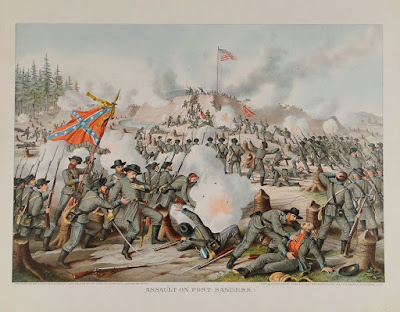 The Chicago printmaking firm of Kurz & Allison is well known for its production of commemorative prints of American historical scenes. Founded in 1880, the firm's avowed purpose was to design "for large scale establishments of all kinds, and in originating and placing on the market artistic and fancy prints of the most elaborate workmanship." Elaborate they certainly were: the majority of their prints are bright and dramatic, with action throughout the image, though others were of a more restrained character, often issued in black and white. Drawn in a broad, graphic style that developed from Kurz's background as a muralist, their prints have a striking appearance. 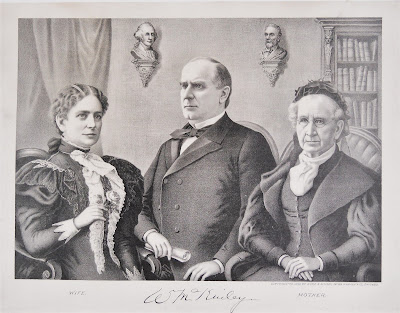 Kurz & Allison did a number of prints of Presidents, some as individual portraits and some as family groupings. One can imagine these somber images hanging in the homes of Americans in the late 19th and early 20th century, as a nationalistic statement and also undoubtedly as inspiration for the family. 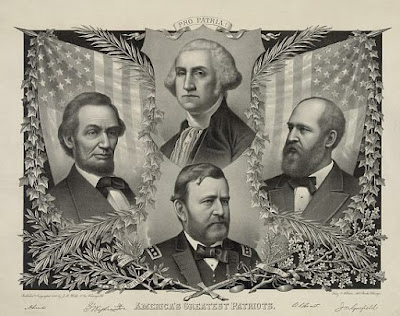 In 1890, the firm lithographed a print of “America’s Greatest Patriots.” This was a highly patriotic print--“Pro Patria!” bannered at the top--included four Presidential portraits in a setting with ivy, laurel branches, and American flags. The ‘father of his country,’ George Washington, has his portrait at top center, below which is U.S. Grant, flanked by the two assassinated Presidents, Lincoln and Garfield. This print was copyrighted by J.M. Wolfe & Co. and it is not clear why it was issued in 1890, as Garfield had been assassinated in 1881 and Grant died in 1885. Only the first state of the print has the Wolfe name on it, later ones listing only Kurz & Allison. 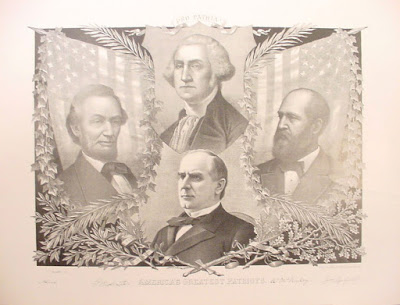 On September 14, 1901, William McKinley became the third American President to be assassinated, shot in Buffalo, New York. Like all print publishers, Kurz & Allison saw this as an opportunity to make a print which would sell because of this national tragedy. Thus they took the original stone--which they must have kept in their warehouse and which they may have continued to issue since 1890—removed Grant’s portrait and substituted that of McKinley. Now they had the perfect commemorative print, with Washington accompanied by the three assassinated Presidents. A nice example of a ‘recycled print.’