The origins of the Nebraska Territory 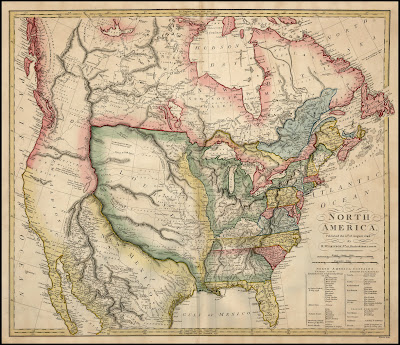 With the Louisiana Purchase of 1803, the United States essentially doubled its territory with the addition of the lands drained by the Mississippi to the west of that river. This area was mostly unknown, so the federal government tried to learn more about this new American territory by sending out a number of exploring parties, including those of Lewis & Clark in 1804-1806 and Stephen H. Long in 1820, and these expeditions did provide some understanding of the geography of the Louisiana Purchase. 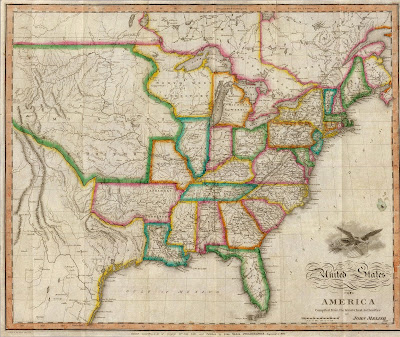 One of the main reasons for acquiring the area was so the United States would eventually be able to open up an outlet for the nation on the Pacific Ocean, but also to provide new lands for emigrants from the east. Americans soon moved into the areas just to the west of the Mississippi, for instance into what would become Missouri and Iowa. By the 1820s, there was considerable settlement in the Louisiana Purchase lands near to the Mississippi River from New Orleans up to St. Louis, but beyond that there little American presence.

There was little incentive at the time for Americans to move into the western parts of the original Louisiana Territory. Reports from the western expeditions had not been glowing in their descriptions of region-—Stephen Long described the High Plains as a “desert”-—and it was already extensively occupied by Native American tribes. And on to top of this, it was far removed from the center of economic and political life in the U.S., bordered beyond by seemingly impenetrable mountains and then Spanish territory. 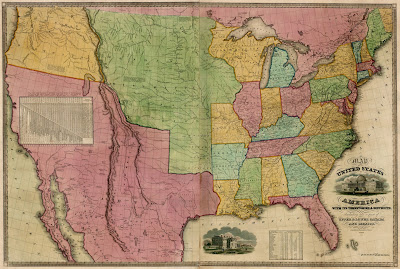 This made it the ideal place to help solve one of the vexing issues Americans were facing at the time, viz. what to do with the Native Americans in the East. Unlike the western tribes, those in the East occupied lands which were coveted by the Euro-Americans and in the 1820s, the federal government began a policy of moving the Eastern Indians to lands west of the Mississippi, culminating in the Indian Removal Act of 1830. This seemed a perfect solution-—to the Euro-Americans-—for they would gain lands they desired and gave up lands that were deemed essentially useless for civilized folk. An additional benefit was that this would set up a buffer between the United States and the Spanish, protecting the countries back door.

So, in 1834, an Indian Intercourse Act set aside for Native Americans "…all that part of the United States west of the Mississippi and not within the states of Missouri and Louisiana, or the territory of Arkansas…" This Indian Territory was steadily reduced over the years, but by 1845 in what had been the Louisiana Purchase, other than a single row of states and territories strung along the Mississippi River, the rest was unorganized Indian lands.

The out-of-the-way, practically useless character of this region, which made it such a perfect place to stick the Native Americans, was soon to radically change. With the increased emigration of Americans to the Oregon Country and California beginning in the 1830s, there was concern in Washington of the need for the development of the lands through which the emigrants would have to pass on their way from the Mississippi River to the Rockies. The need for a military presence for protection, a formal government structure for laws, laws for economic development, and new settlements to help feed and house the emigrants, all made it evident that there had to be some sort of governmental presence crossing the Indian Territory. 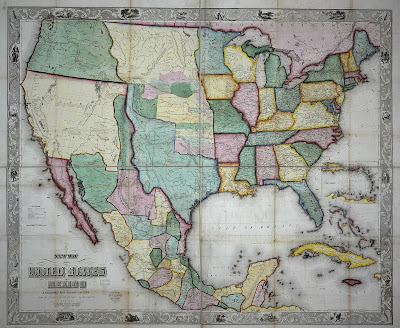 Then with the 1848 Treaty of Guadalupe Hidalgo, which ended the Mexican War, the urgency of this was made even greater. By the Mexican Cession, the United States gained another huge swath of territory, now extending the country from the Atlantic to the Pacific Ocean. The Indian Territory was now no longer at the inaccessible, back-end of the country, but was smack-dab in the middle, between “the States” and newly gained California. The Indian Territory now separated the population, money and power of the East Coast from the golden lands on the Pacific. What had been a buffer was now a barrier. Travel by sea, either around the tip of South America or by way of a land crossing at Panama, was possible, but it was quite clear that a land route across the Indian Territory-—preferably by railroad-—was something that was an economic, social and political necessity.

The need for some sort of U.S. government control over a land bridge between the territories and states along the Mississippi River and California and Oregon was clear. Between 1844 and 1854 there were 8 proposals for a new territory spanning the Indian Country. The name for this proposed territory was to be "Nebraska," a name first used by Frémont to refer to the Platte River, which was for much of its length the main route for the emigrants heading west. "Nebrathka," was an Otoe word for ‘flat water' and was used by them as the name for the Platte.

The first official proposal was by Secretary of War William Wilkins in his annual report of Nov. 30, 1844. This was taken up by Stephen Douglas with House bills in December 1844. The idea was to create a territory along the Platte River Valley with a string of military posts from the Missouri River to the Rocky Mountains. These bills failed. Another bill was put forth in 1848, and others in 1850 & 1852 & 1853, but all failed. 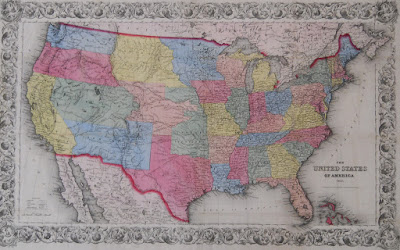 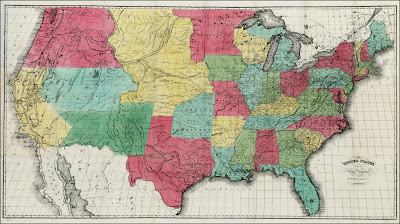 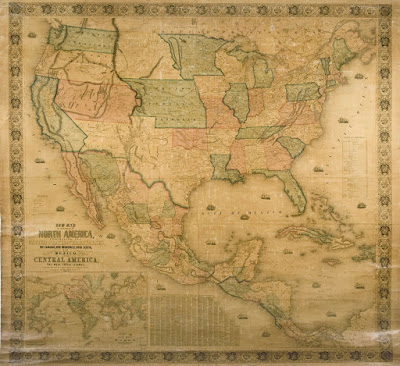 A number of maps in this period show these tentative Nebraska Territories. The reason none of these acts were passed was because of sectional tensions over slavery. Southerners continued to stonewall the creation of a Nebraska Territory in this region, for any such territory would, by the Missouri Compromise, have to be a free territory. 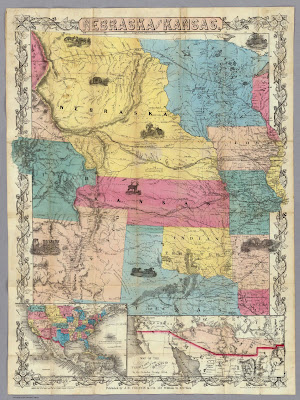 It wasn’t until Stephen Douglas’s Kansas-Nebraska Act of 1854 that a Nebraska Territory was finally created spanning the Great Plains and allowing for the building of a trans-continental railroad. The final territory was quite different than those previously proposed, for not only was it joined by another new territory to the south, Kansas, but it encompassed about half of what had been Indian Territory. By this act, the territory set aside for specifically for the Indians shrunk to just what is today’s Oklahoma (actually, the panhandle of today’s Oklahoma was not then included in the Indian Territory).