Mormons have been controversial since their founding in 1830. This was in part because of the peculiarities of their religion, in part because of the insularity of their social lives, and—perhaps as important as any of these factors—because of their practice of polygamy. Due to local conflicts, the Mormons were forced to move a number of times from places they tried to settle, culminating in 1839 in an attempt to found their Zion on the banks of the Mississippi at what became Nauvoo, Illinois. 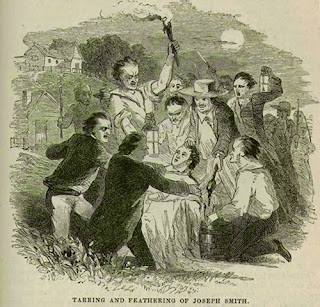 Tensions continued, however, with those in the surrounding region harassing the Mormons and in June 1844, with a mob actually murdering the sect’s founder, Joseph Smith. Violence against persons and property continued in the following year, so that finally Brigham Young, the new leader of the Church of Jesus Christ of Latter-day Saints, decided that he would lead them west to a place where they could be practice their religion without interference, free from the prejudice and violence they had always faced. 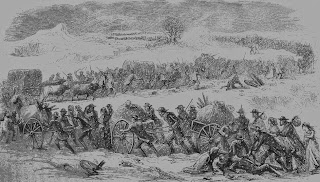 In February 1846, the Mormons crossed the frozen Mississippi and over the next year moved slowly across Iowa, finally settling in what became known as “Winter Quarters” in the Nebraska Territory, across the Missouri River from Council Bluffs. Young’s ultimate goal, though, was further west, in the Great Basin which at the time was part of Mexico. This remote area was essentially unpopulated and was far away from any government or other settlers.

In April 1847, the Mormon’s headed west along the California Trail, arriving in July of that year. They immediately beginning to build their new community by the Great Salt Lake. In 1847, about 1,600 Mormons arrived there, followed the next year by 2,500 more, and then thousands more in the next decades. 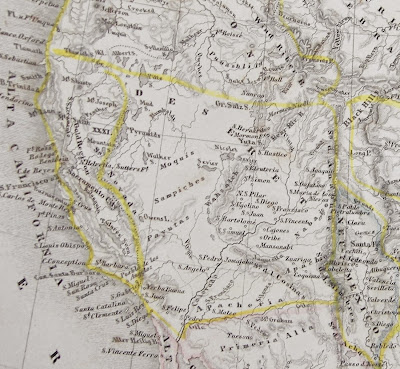 Brigham Young wanted to create a wide spread Mormon community, sending out settlers throughout the Great Basin, and he wanted the entire Great Basin to be politically run by the Church. His plans became more difficult when, as a result of the treaty which ended the Mexican War, what had been Mexican territory because U.S. territory in 1848. In 1849, Young sent a petition to Congress to create a territory of Desert (the name derives from the word for “honeybee” in the Book of Mormon), which would have extended to all the lands lying between the Rocky and Sierra Nevada Mountains, from Oregon Territory in the north and Mexico in the south.

At that time, the citizens of the other areas acquired by the United States as part of the Mexican Cession of 1848, California and New Mexico, were applying for their admission as states, so Young soon modified his application to Congress for Desert to become a state instead of just a territory. He and the elders of the Church meanwhile drafted a state constitution and set up a provisional state government, so that they would have the wheel of power when the new state was created. 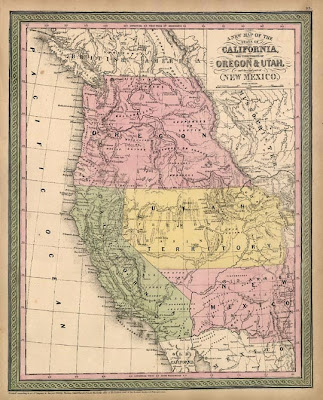 Congress definitely had an unfavorable view of the Mormons, with most Congressmen finding the religion heretical and polygamy reprehensible. This anti-Mormon feeling meant that there was no chance that Young’s proposed Desert would be realized. Instead, in 1850, Congress broke the Mexican Cession into three parts: the state of California, and the large territories of Utah and New Mexico. Utah extended from the continental divide to the Sierra Nevada Mountains, separated from New Mexico at the 37° parallel.

Interestingly, Young did not give up on his hope for a Mormon state of Deseret even after the new territorial government was set up. Young and the elders met for almost ten years in a shadow government, which ratified all the laws passed by the territorial legislature, so theirs could be created as the official government if the state were ever created. Young petitioned for the state again in 1856, 1862 and finally in 1872, but it never came to pass. 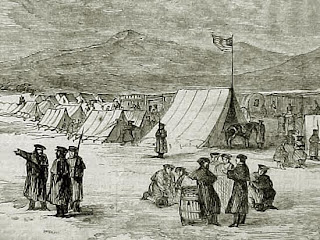 Despite this disappointment, Brigham Young and the elders did dominate the Utah territorial government and this began to lead to new tensions as non-Mormons moved into the territory. There were complaints about the theocratic rule of Utah and also about the continued practice of polygamy. This spurred the U.S. government to send troops to Utah, causing the Mormons to react as though they were being invaded. 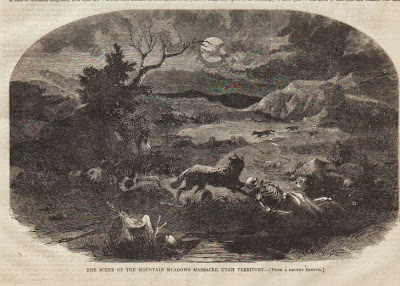 The upshot of this was the “Utah” or “Mormon War,” which lasted from May 1857 to July 1858. There was considerable posturing and some skirmishes, with the greatest loss of life occurring when a party of California-bound emigrants were killed by a group of Mormon militiamen in what is now called the Mountain Meadows massacre. Eventually an agreement between the Mormons and the federal government led to Young giving up his governorship, though the Mormons were able to retain their operative control of the territorial government.

All of this set the scene when events began to create a need for the division of the large southwestern territories into smaller units. The Utah territory, effectively run by the Mormons, was definitely not popular with Congress, which was able to show its displeasure over the next decade. Utah and New Mexico were huge territories and as new populations moved into them, the new settlers began to demand regional divisions so they could control their own affairs with a local government. Between 1861 and 1868, Congress did create new territories out of parts of Utah and New Mexico. Not surprisingly, as Utah was apportioned, none of the divisions favored the Mormon-led government of Utah.

The division of Utah was a direct result of the movement into the region of gold and silver seekers. In 1859, a major discovery of silver—what came to be called the Comstock Lode—was found on the east side of the Sierra Nevada Mountains in far western Utah Territory. Miners poured into the area and these were definitely dissatisfied with being under the control of the Utah Territorial government. Not only was the center of the government located almost at the other end of the territory, in Salt Lake City, but these miners were for the most part strongly anti-Mormon. They soon petitioned for the creation of their own territory out of the western part of Utah. 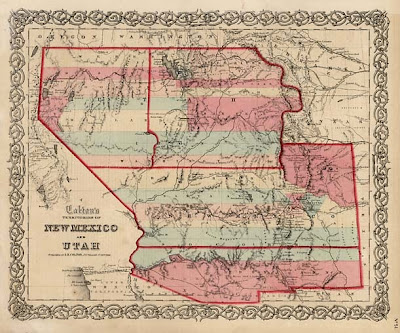 Though many in Congress were favorable towards the notion, the creation of such a new territory was at first impossible. A new territory created out of western Utah would almost certainly prohibit slavery, both because it was north of the original Compromise of 1850 latitude line of 36°30’, but its citizens were also anti-slavery. The southern Congressmen were unwilling to allow such a new free territory and so an impasse was reached. However, when all the southern Representatives and Senators left with the beginning of the Confederacy in early 1861, the remaining Congressmen were easily able to create the territory of Nevada on March 2, 1861. This territory was created out of all that part of Utah west of the 116th meridian, about one third of the original area of the Mormon-run territory. 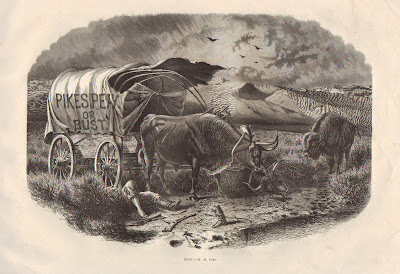 This, though, was not the only land which was taken from the Utah Territory in 1861. The silver rush in Nevada was paralleled on the eastern side of the Rocky Mountains when gold was discovered in 1858 near the confluence of the Platte River and Cherry Creek in far western Kansas Territory. This led to the “Pikes Peak Gold Rush” and a heavy influx of miners in such new communities as Auraria, Denver City, and Golden.

Similarly to the miners in what became Nevada Territory, the settlers along the Front Range were unhappy with what was their very distant government, located at the other end of the Kansas Territory, well to the east near the Missouri River. They also petitioned to Congress for a new territory; one group tried to create the territory of Colona and one to create the territory of Jefferson. For the same reasons that Congress was unable to act on the petition of the settlers on the east slopes of the Sierra Nevadas, it was also unable to act on the petitions of either of these Front Range groups until early 1861, when the new territory of Colorado was created. 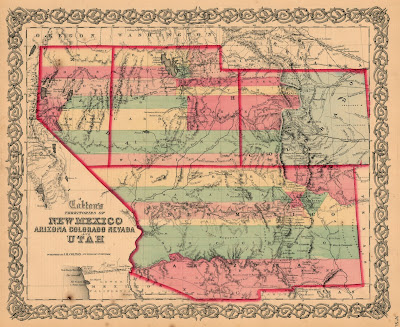 Colorado mostly was created out of the western part of Kansas, but it also got some land from the northern part of New Mexico, the southwestern part of Nebraska, and, naturally, the eastern part of Utah. Kansas Territory had extended west as far as the continental divide and many of the initial proposals for breaking off a new territory also were limited to that western border, but when Congress did create Colorado on February 28, 1861, it was extended well west of the divide, taking up all of eastern Utah as far as the 109th meridian. Just to add insult to injury, the small northeastern triangle of Utah—between the 110th meridian and the continental divide, north of 41° latitude—was given to Nebraska Territory. 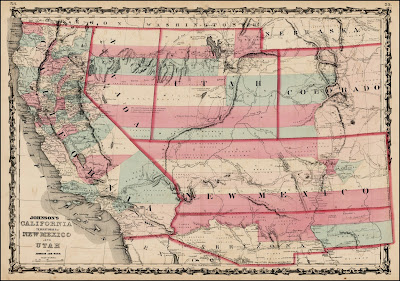 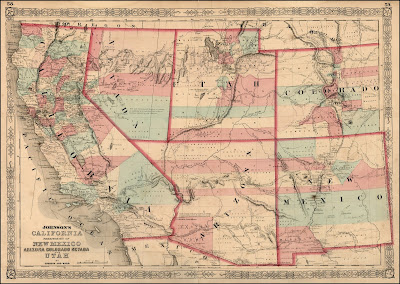 Things didn’t end here for poor Utah. In 1862, silver was discovered in the western part of the shrunk-down territory, in what would be the Reese River Mining District. Congress didn’t hesitate in deciding to move the border of Utah one more degree east, so these new mines would be in Nevada. On March 1863, the Utah western border was moved one degree further east, to the 115th meridian (note how on the bottom map above the border runs right next to the "U" in "Utah," as compared to the map above). 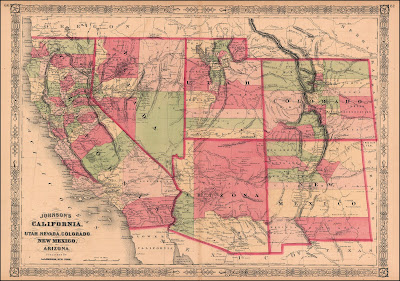 Just three years later, essentially the same thing happened again. Beginning in 1865, a rumor appeared concerning new mineral riches, including perhaps the legendary silver mountain, located in what was then western Utah, in an area which would become the Pahranagat Mining District. It was not known at the time whether this area was located in Nevada or Utah, so in order to be sure, in 1866 Congress once again shifted Nevada’s border one degree further east, to the 114th degree line. 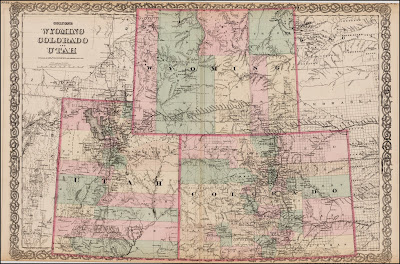 Not done with their work, that same year, another chunk of the northeastern part of Utah was bitten off—the lands lying north of the 41° and east of the 111th meridian—and given to the new Territory of Wyoming.

So, from 1861 until 1866, Utah Territory lost well over half of its land through acts of Congress. It was too large to be governed practicably when first created, but much of the reduction in size had to do with Congressional bias against the Mormons. This bias is further evidenced by the fact that Nevada Territory, created in 1861, became a state only three years later in October 1864, whereas Utah Territory, created in 1850, didn’t become a state until almost half a century later, in 1896! This, naturally, happened only after polygamy was renounced in the territorial constitution that year.