THE SEARCH FOR EL DORADO 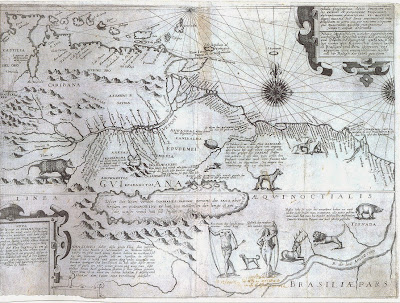 Of all the legends relating to America, perhaps the most recognizable myth concerns “the search for El Dorado.” While this phrase is very familiar, the actual story behind the hunt of El Dorado is not. This myth is one of my particular favorites, for it has all the elements of a great story—-mystery, riches, adventures, madness, deaths--and to my delight, maps. 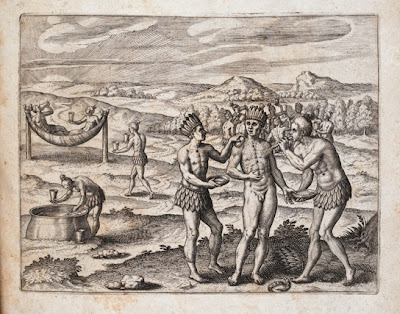 The myth of El Dorado started in the early sixteenth century as the search for “El Hombre Dorado,” that is, the golden man. By 1540, the Spanish in America very much had gold on their minds, and no wonder. In Cuba they had heard tales of a rich kingdom on the mainland of North America, and when Hernán Cortés went there in 1519, he discovered and conquered the immensely rich Aztec Kingdom. Just a few years later, the Spanish in the newly subjugated territory heard of another rich kingdom to south, and Francisco Pizarro soon discovered and conquered the also immensely wealthy kingdom of the Incas. After those two tales of rich kingdoms proved so fruitful, who among the Spanish would be lax in following up any subsequent rumors? Such a story soon appeared, that of El Hombre Dorado, and this led to one of the most horrific, bizarre and unending searches for riches in the history of the Americas. 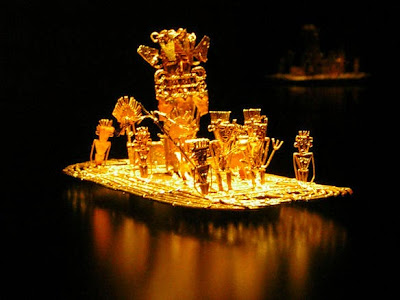 The story of the golden man began in the Columbian highlands, fairly near present-day Bogota. There are a number of explanations of the true basis for this legend, but they all concern the Muisca Indians of the central Colombian plateau in the area of Lake Guatavita. There seems to have been some sort of religious ceremony concerning a Muisca chief, the lake and gold. One story had this chief coating his body with gold dust and then bathing in the lake, an event shown by Theodor De Bry (engraving illustrated above) and also supposedly depicted in the famous gold Muisca Raft. There does seem to have been some sort of ceremony involving the Muisca and gold, but whatever its factual basis, when the story of a golden man reached the Spanish about 1541, it set off a long series of searches for El Hombre Dorado. 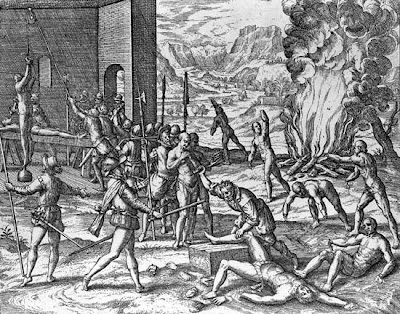 A number of Spanish conquistadors set off in 1541 and did make it up to the area of Lake Guatavita, even attempting to drain the lake to find any gold under its waters. Using their typical methods of persuasion—-including torture—-the Spanish tried to get the Muisca to show them the gold. There was some gold in the area, but not nearly enough to convince the Spanish that they had found the true El Hombre Dorado. Finally the Muisca realized that the only way to get rid of the gold-crazed Spanish was to send them away by telling them, in effect, “Oh, that El Hombre Dorado. Yes, we know where he is, over the mountains that way....”

For the next half century, the search for El Hombre Dorado worked its way slowly across the northern part of South America, from the Colombian highlands, down into the Amazonian basin, working ever eastward. Time and again, the Spanish would arrive in an area that they had been told was the location of El Hombre Dorado, only to find none of the riches they sought even after “questioning” the locals, and then to be told, “Oh, that El Hombre Dorado. He resides over that way...” 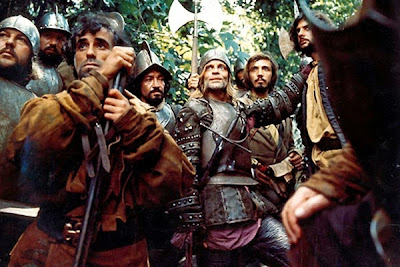 A number of major expeditions went in search of this myth, including Gonzalo Pizarro and Francisco de Orellana in 1541 and Lope de Aquirre in 1560, wasting much effort, expenses, and hundreds of lives, both natives and Spanish. The huge effort and costs expended on the search and the horrors experienced made this legend one of the most powerful of American history. A nice depiction of the madness which consumed the Spanish is Werner Herzog’ movie, “Aquirre, the Wrath of God.”

At some point, the story began to morph in its content as well as location, for the search began to focus on a rich kingdom or city, rather than a man, the legend becoming that of simply “El Dorado.” One man who accepted as true this form of the legend was Antonio de Berrio, who believed the city lay in the Guiana Highlands. Berrio started to search there in 1584 and he heard from the Indians that there was a large lake south of the Orinoco River that was so large it took them three days to paddle across it, and upon the shores of which lay a rich city, that is, of course, El Dorado. He tried several times to find the city, eventually becoming convinced it lay up the Caroni River, a branch of the Orinoco. Berrio was unable to ascend the river, but his delusion was fully confirmed when he met a man named Juan Martinez (aka Juan Martin de Albujar).

Martinez had been on a ship sailing on the Caroni River when its gunpowder exploded. Martinez, blamed for the accident, was left behind as punishment. He eventually made it back to Spanish settlements, claiming that he had been rescued by friendly Indians who took him to a city called Manoa, where the palace was made of gold. He further claimed he was given great riches when he left, but that they were stolen from him on his return trip. Thus it was that El Hombre Dorado now became the city of Manoa, or El Dorado, located on a large lake in the interior of Guiana. 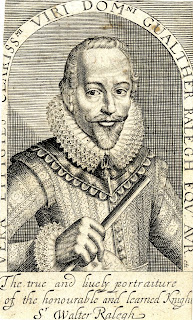 At this time another famous figure makes his appearance in our story, Sir Walter Ralegh. Ralegh set sail from England in 1595, in order to discover “a better Indies for her Majestie [that is Queen Elizabeth] then the King of Spain has any.” Ralegh captured Sa Jose on Trinidad in April 1595 and took Antonio de Berrio captive. Ralegh had heard rumors of El Dorado and was able to convince Berrio to tell him all he knew of this legendary city, a story which Ralegh bought into totally.

Ralegh wanted to convince the Queen to conquer Guiana so he published a report, The Discovery of a Large, Rich and Beautiful Empire of Guiana in 1596. This included a full description of Manoa/El Dorado, conflating many of the old stories about El Dorado. About the same time Ralegh produced a map of northern South America showing the large lake, now named as Lake Parime, and the city of Manoa. 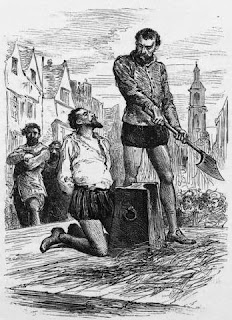 After Queen Elizabeth died, her successor, James I, who immune to Ralegh’s charms, threw Sir Walter into the Tower of London. Ralegh petitioned James to get out so he could go find El Dorado and make the monarch rich. James was convinced enough to allow Ralegh out on this mission, but only on the condition that he not get into a fight with the Spanish. Ralegh set off for South America in 1617, and through a series of misfortunes, including battles with the Spanish resulting in the death of his son, returned to England a failure. James threw him back into prison and soon thereafter, at the urging of the King of Spain, Ralegh was beheaded; one of the last deaths directly related to the legend of El Dorado. 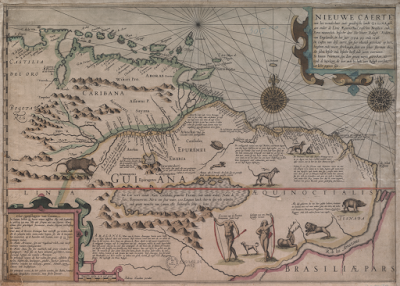 Though his search for the fabled golden city failed, Ralegh did manage to put El Dorado on the map. Based on Ralegh’s book, Joducus Hondius, Sr., Theodor De Bry, and Levinus Hulsius all issued maps by the end of the sixteenth century showing Lake Parime with Mano or El Dorado on its shores. 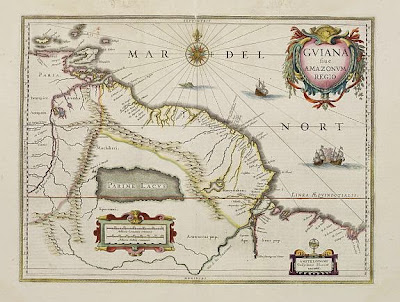 The lake and its golden city continued to appear in the seventeenth century, changing shape and with Manoa moving around a bit. 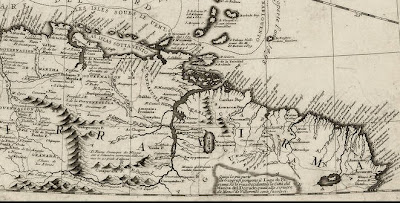 In the eighteenth century, the lake began to be called into question. Some of the more scientifically inclined (and skeptical) cartographers such as Vincenzo Maria Cornonelli and Guillaume Delisle either showed the lake with notes calling it into question, or didn’t show the lake, but included notes mentioning its possible existence. 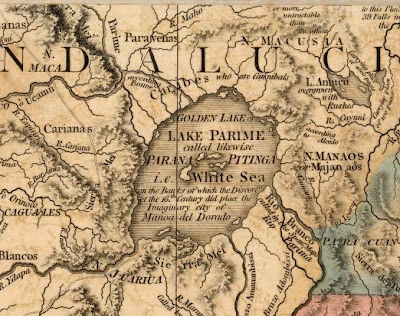 By the end of the eighteenth century, Manoa was pretty much forgotten and “El Dorado” had simply become a phrase meaning hopeless quest. Manoa/El Dorado soon disappeared from most maps, though interestingly, Lake Parime, which was simply one more fictional element of the El Dorado myth, did not disappear along with the city. This was an excellent example of how once some location—-real or fictional—-appears “on the map” it tends to stay on the map. 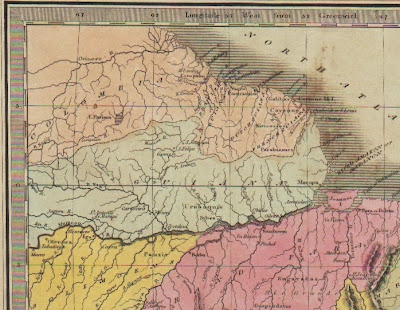 In the early nineteenth century, the famous German explorer and scientist, Alexander von Humboldt, went looking for Manoa and Lake Parime, concluding that neither had any basis in fact. His prestige was such that this tended to remove Lake Parime from many maps, but the lake did continue to appear on others well into the century.

Click here to view on-line lecture on the cartographic myth of El Dorado.