John Brown first appeared on the national scene as leader of abolitionist forces during the “Bleeding Kansas” crisis in 1856. Brown became convinced that there was no way to achieve abolition other than by an armed revolution. Referring to the mainstream abolitionist groups, Brown stated, “These men are all talk. What we need is action—action!”

In late 1856, Brown headed East to raise funds, weapons and followers, traveling around New England, New York and into Canada, meeting with many prominent abolitionists and antislavery groups. By late 1859, Brown was convinced that he had the support necessary to start a glorious antislavery uprising among abolitionists and both slave and free blacks. So he went south to Harper’s Ferry, where on October 16-18 he led a raid on the federal armory, a bold act which he thought would spark that uprising. This did not happen, however, and Brown was subsequently captured, tried and hung on December 2, 1859. 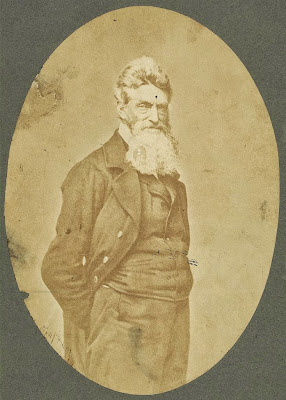 The photograph above was taken May or June 1858, when Brown was traveling through New England. It is the first image of Brown with a beard, for hitherto he had been clean shaven. It was the source for a lithograph issued by E.B. & E.C. Kellogg shortly thereafter. 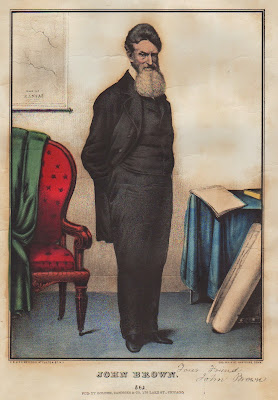 That print is interesting for a number of reasons. First, it is a pre-Harper’s Ferry print of Brown, as evidenced by the lack of mention to that action which so defined Brown’s fame from October 1859 on. It would seem that this print was issued by the Kellogg firm in response to Brown’s travels in New England, for the Kelloggs were located in Hartford, CT, and Brown would have been a figure of considerable interest to the public in the area in 1858-1859.

To the photographic image, the Kelloggs added a map of Kansas hanging on the wall in the background. It is interesting to note that there was no such wall map of Kansas issued that early, so this is simply a made-up image. Also of interest is another map, of indeterminable subject, rolled up and leaning on the table at right. The meaning of this seems clear: the Kelloggs were symbolically representing Brown’s vow to extend the abolitionist movement from Kansas (the wall map) to the rest of the country (the rolled map). 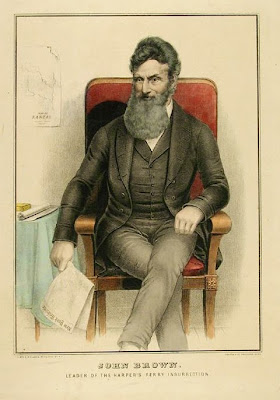 This print was followed by the Kellogg’s competitor, Currier & Ives, after the Harper’s Ferry raid, as the subtitle calls Brown “Leader of the Harper’s Ferry Insurrection.” Brown is sitting, rather than standing, and the map of Kansas still hangs on the wall, while the second map is now rolled on the table. In this print Brown is holding a copy of abolitionist Horace Greely’s New York Tribune, which may explain the unidentifiable paper on the table in the Kellogg print.