Views of the Rocky Mountains from Denver 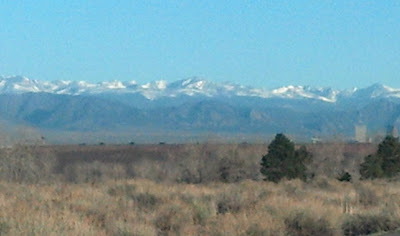 I have recently signed up for a six day, 442 mile bike ride through the Rocky Mountains, called Ride the Rockies, This obviously necessitates a lot of training! Towards that end I am doing a 25 mile loop three days a week that takes me up to the Cherry Creek State Park, which has an elevated position to the southwest of Denver. Because of this, I get a terrific view of the Rocky Mountains that changes every day (that is part of downtown Denver at the right of the photo above). I do my ride at dawn, so I often have the sun bathing the Rockies with glorious light, giving me a boost of enthusiasm to keep up my training.

In any case, the view of the Rockies, from approximately the location of Denver, is one that has inspired a number of artists over the years, so there are some very nice prints which show it. Today's blog will look at a few of these. 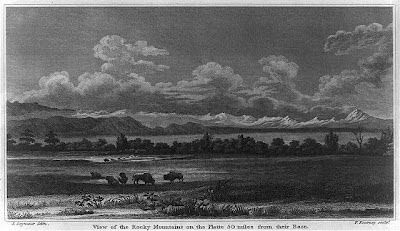 Seymour accompanied Major Stephen Long’s expedition to the Rockies in 1819-20. The expedition came down the South Platte, passing by the future site of Denver, and Seymour made a number of drawings of what is today Colorado. This view was drawn on July 4, 1820 from a position just to the north of Denver. The view shows South Boulder Peak, Green Mountain and the site of today’s Boulder. While not exactly the same as my view of Denver, it is very similar. 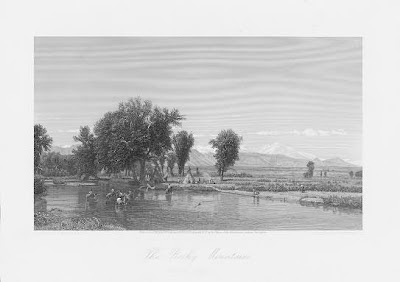 Seymour’s scene shows the plains along the base of the Rockies as completely undeveloped. This changed radically four decades later, with the Pike’s Peak gold rush of 1858-60, when Denver and Golden were established in this area. Still, the land along the foothills was relatively undeveloped and the area was definitely the American frontier. This was the feeling that Worthington Whittredge wanted to show in his view of “The Rocky Mountains.”

Whittredge was a well-known landscape artist from the mid-west who traveled to the American West with General John Pope’s expedition of 1866. About 1870, Whittredge produced a painting, “Crossing the Ford, Platte River, Colorado,” based on sketches he made during this trip. The scene shows the ford on the Platte, essentially at Denver, with an Indian settlement along the banks of the river and the Rockies in the distance. No evidence of Denver or any other gold rush impact is seen, for Whittredge was interested in a natural western scene, not in the changes being wrought by the flood of Americans from the east. 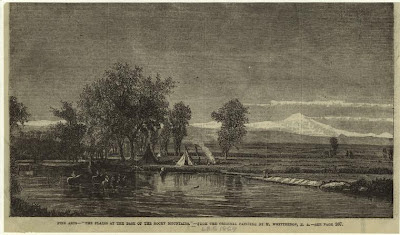 This painting fit the image that Americans wanted to have of the Rockies, so it because very well-known and was reproduced twice in print. First it appeared as a wood engraving in Leslie’s Weekly in 1869, and then in 1872 in Picturesque America as a steel engraving.

The same year that Whittredge painting his image, another artist made a drawing showing the Rockies from Denver, but with totally different intent. A.E. Mathews, who had produced a number of lithographs of the Civil War, moved to Colorado in 1865. He began to make prints of Colorado scenes, which in 1866 he gathered together and issued in a portfolio entitled Pencil Sketches of Colorado. 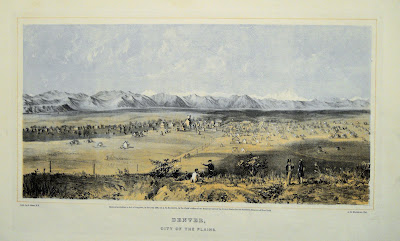 This portfolio included 36 plates, one of which showed Denver from a rise about one mile to the east of the city, with the Rockies prominently displayed in the background. In contrast to Whittredge's intent, Mathews was definitely trying to show the "progress" being made in Colorado, with Denver City shown neatly laid out and with some impressive looking buildings. However, in the text which accompanied the portfolio, Mathews makes it clear that "the principal object [of the view] being to show the eastern slope of the mountains in connection with the city."

He goes on to describe this view:


"So clear and pure is the air on the plains, that the mountains can be distinctly seen 175 miles off. The Rocky Mountains assume new, peculiar, and beautiful features almost every day and hour, according to the condition of the atmosphere and position of the sun. Sometimes on a bright moonlight night, or just before sunrise, the rocks, canons and trees stand out so distinctly that the mountains appear to be but a mile or two from Denver...When the air is clearer than usual, a most beautiful effect is seen just as the light of the sun has left the western horizon; the horizon is lighted up by a soft, cool, silvery light, caused by the sun shining on the western slow of the snow-covered mountains. The beauty of the sky and clouds in Colorado, especially in summer, rivals that of Italy."


These comments are right on, for every day the Rockies appear in a different and remarkable aspect. I love all of the prints above, but the real scene (which I get to see every day) beats them all.
Posted by Chris Lane at 1:08 PM