As described in the previous blog from this series, by 1830, three relatively small political entities (two states and a territory) had been created in the original Louisiana Purchase of 1803. The remainder of the purchase lands, now called the Missouri Territory, was mostly occupied by Indian tribes. Some of these Native Americans had been located in the trans-Mississippi West for a long time, but many had been pushed west relatively recently by the advance of EuroAmericans from the east coast ever westward. Still, there were significant Indian populations east of the Mississippi, especially in the southeastern part of the United States. 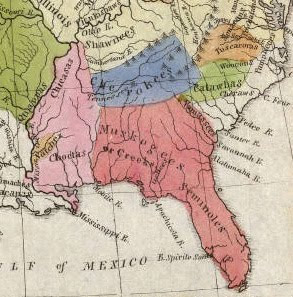 From the beginning of their settlement in the southeast, EuroAmericans saw the five “civilized tribes” (Cherokee, Chickasaw, Choctaw, Creek and Seminole) as impediments in the way of their desire for land. Beginning in the second decade of the nineteenth century, military and political pressure was brought by the U.S. government to get those tribes to give up their land in the southeast in exchange for new lands in the Missouri Territory. By the 1820s, much of the Indian land in the southeast was under government control, though few Native Americans had actually moved across the Mississippi.

In 1830, Andrew Jackson pushed the Indian Removal Act through Congress in order to enable to government to "remove" these tribes from the southeast to the trans-Mississippi West. This was supposed to be voluntary, but even more pressure was put on the tribes to accept this removal. Over the next decade, these tribes signed treaties or were forced by military action to move west, and by the end of the decade, most Native Americans from the southeast had moved across the Mississippi. 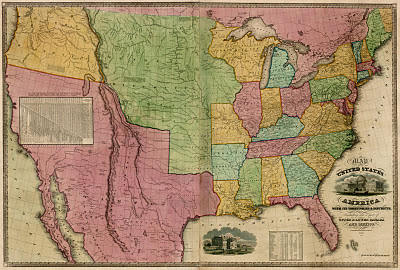 In order to try to protect the Native Americans in their new lands, and of course also to keep them contained, the Indian Intercourse Act was passed in 1834, setting aside for the Indians "…all that part of the United States west of the Mississippi and not within the states of Missouri and Louisiana, or the territory of Arkansas…". That is, essentially all of the Missouri Territory, encompassing the original Louisiana Purchase excepting the three political entitles which had been created in the previous decade. 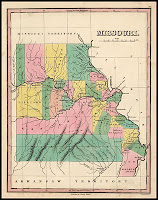 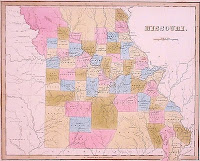 Most of the land granted to the “removed” Indians was in the southern region, to the west of Arkansas, though there were many other tribes in the more northern parts of the territory. Replaying the previous history of the relationship between the U.S. government and Native Americans, however, this vast Indian territory was regularly whittled down in size through the rest of the century. For instance, just two years after the Indian Intercourse Act, the Sac & Fox tribes were convinced to give back the lands between the state of Missouri and the Missouri river, moving the northwestern border of the state to the west. 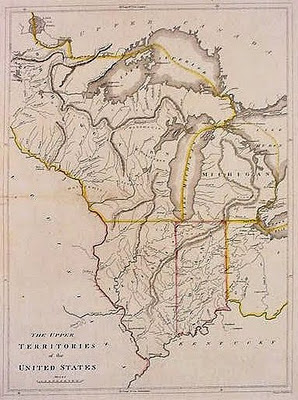 The original “Northwest Territory” comprised those lands west of Pennsylvania, north of the Ohio River and east of the Mississippi. By the Northwest Ordinance of 1787, this territory was to be broken up into states and smaller territories as the population increased. 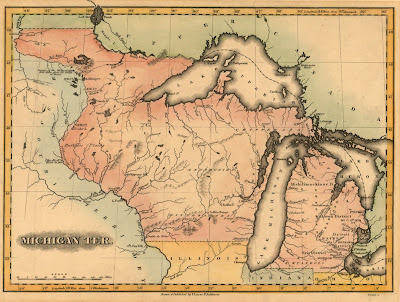 In 1818, when Indiana and Illinois were made states, the remainder of the original Northwest Territory became the Michigan Territory (essentially today’s Michigan, Wisconsin and the eastern part of Minnesota).

In 1834, the Michigan Territory was expanded to include those parts of the Louisiana Purchase north of the state of Missouri and east of the Missouri River, that is, including what today are the rest of Minnesota, Iowa and the eastern parts of the Dakota’s. 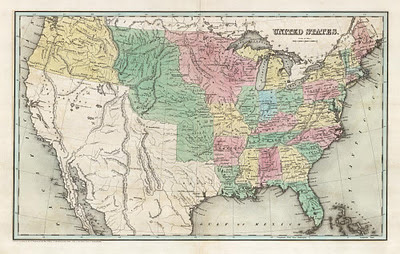 In 1836, Arkansas was admitted as the twenty-fifth state. As the thirteenth slave state, this gave slavery proponents an advantage in Congress, so it was decided that a new, free state of Michigan would be admitted (which it was in January 1837). The entire Michigan Territory was too large to be admitted as a state, so in the summer of 1836, the western part of the territory (today’s Wisconsin, Minnesota, Iowa and the eastern parts of Dakota) was broken off as the Wisconsin Territory. 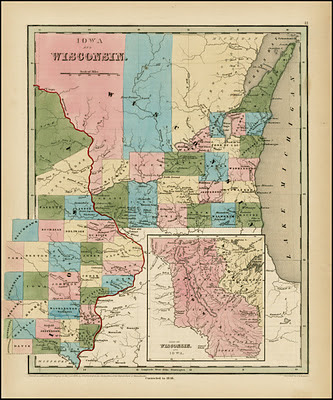 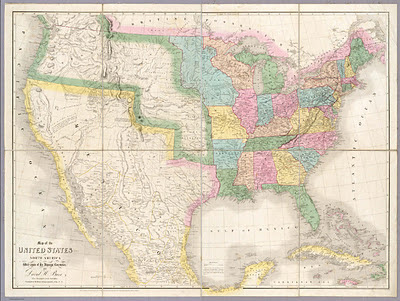 Thus, in 1839, the trans-Mississippi United States consisted of three states hugging the river—Louisiana, Arkansas and Missouri, the territory of Iowa, lying between the Missouri and Mississippi, and a large Indian territory lying between these states and territory and the continental divide. Besides this, a vast area north of Mexico and west of the continental divide, called by the Americans the Oregon Country, was in theory jointly administered by Great Britain and the United States. The story of that region will be the subject of the next blog on shaping the trans-Mississippi west.
Posted by Chris Lane at 3:33 PM